In the minutes after La Rochelle's defeat to Toulouse in Saturday's Champions Cup final, Ronan O'Gara said that he felt his side should have had a penalty in the dying moments of the game.

"If one player gets isolated against three, he's holding on, and it's a penalty," said the La Rochelle head coach. In a game with a five-point winning margin, O'Gara felt it was a crucial decision.

English referee Luke Pearce told The Rugby Pod that he understood the Corkman's frustration at the time but that he and his officiating team did not see any offence.

"Ronan was the first person to come and shake our hands after the game before the trophy presentation," said Pearce.

"One thing that I like at the moment that we've got in rugby - and I know the bullshit phrase is 'respect' - but we have got that back in the game now.

"I like the fact that he can say what he wants and how he feels on telly, but then he comes up and tells me that as well, shakes my hand, and says, 'Other than that mate, I thought you did a good job'. I've got no problems with that at all.

"I'd much rather it that way than being all friendly in front of our faces and then being different behind our back."

Pearce also spoke about the online abuse which he has been sent during his years as a referee. At 33, the weekend's game made him the youngest official to take charge of a Champions Cup final.

"I used to come off games in years gone by and be so conscious about what everybody else is saying about a performance," he said.

"As I've got a bit older, and been involved in those bigger games, I've realised that's not really important immediately afterwards.

"I've spent all week trying to prep my team to perform and help me out on the pitch that I [should] give them a bit of time back.

"One thing we always try and build in - and I nicked it off Barnsey (Wayne Barnes) - we go back into the changing room, and there's no phones for 30 - 45 minutes. We'll sit down, have a few beers, chat through the big stuff that's happened. In the shower, we'll go 'That's what we need to look at'.

"If people want to send you messages that aren't so pleasant, that's just the nature of the beast. As hard as it is to read them - of course it is, it's not very pleasant when you're reading people wanting bad things to happen to you and your family... It's a sad day when you're getting that built up about rugby that you're sending messages like that.

"I've probably 15 - 30 messages that weren't very pleasant. If it's only 30 people out of the millions watching, then that's part of life." 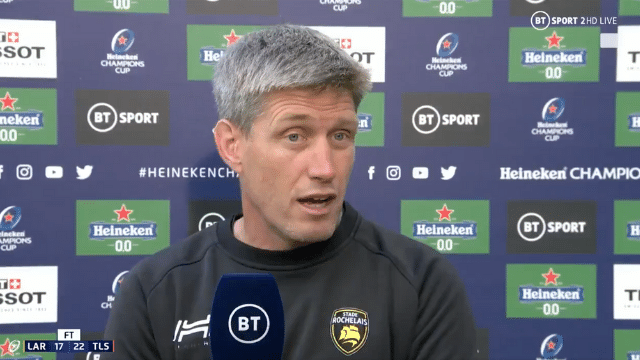