'I Have Never Seen Him Play So Well. He's Been Fantastic'

Ireland will need every edge possible if they are to overcome New Zealand on Saturday. Joe Schmidt's side won't match them out wide or in skill-to-skill combat but former Irish international Malcolm O'Kelly feels they might have an advantage in one key area.

The back row battle sees the formidable trio of Ardie Savea, Sam Cane and Kieran Read come up against Peter O'Mahony, CJ Stander and Josh van der Flier. While much of this squad have struggled for form, van der Flier has quietly gone about his work in impressive fashion and O'Kelly is glad to see it.

Josh, Against Samoa I have never seen him play so well. He has been fantastic. The backrowers really stood out to me. Previously I thought they were poor. They hadn't really stood up and dominated. That was a big mark, a big plus.

I thought CJ was superb. Suddenly he was looking for an offload. When you have to look to change the point of contact, we can’t just hold onto the ball. I know conditions were against us and we were afraid to make a mistake. That can be the eye of Joe Schmidt looking down, making player fearful of those plays.

For the former Leinster lock, that is vital. It's not only at the breakdown but in attack that Ireland need their loose forwards to fire:

"They have to do that. They have to get hands free to try and offload. Fix defenders, flood through the contact area with support players who receive that ball and attack through. We can't go laterally the whole time." 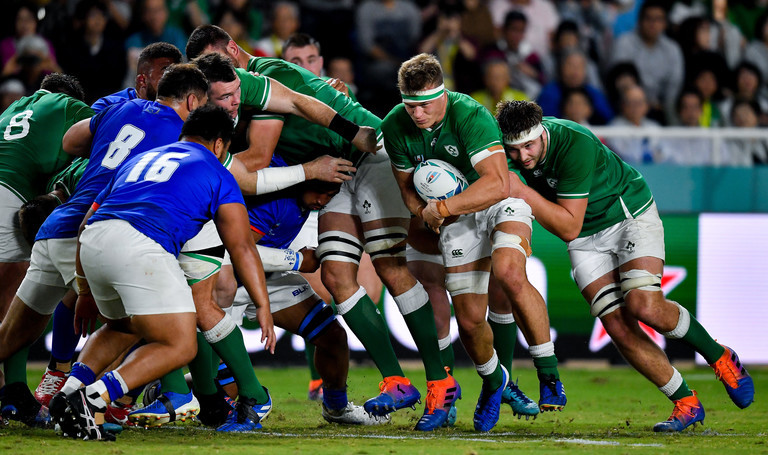 It will take precision and power if Ireland are to make history. As well as that, O'Kelly feels a New Zealand drop-off will be necessary.

"I am optimistic we will have a performance. Whether or not it is enough to beat New Zealand is another matter. I think we need New Zealand to be undercooked. They didn’t play Italy and have only had one big game."

Heineken Rugby ambassador Malcolm O'Kelly was speaking ahead of the upcoming Quarter Finals at the Rugby World Cup. Heineken is the official worldwide partner to Rugby World Cup 2019 Japan.