Leinster have been an unstoppable force this season, seemingly taking things up another notch from where they have been over the last couple of years.

It would be a massive shock were they not to emerge victorious in the United Rugby Championship, while they are also probably the favourites for the Champions Cup as things stand. The standards they maintain in every campaign are remarkable, with Leo Cullen at the centre of that.

The former Ireland international has been the head coach at the province since 2015, in that time winning one Champions Cup and four Pro14 titles. Despite this, he often does not get the credit he deserves.

Speaking on Virgin Media before Leinster's meeting with Bath this afternoon, Matt Williams said that there is almost a sense of 'ignorance' about the job Cullen has done with this team.

"He's probably the most outstanding indigenous Irish coach of the professional era, as far as results go."@MattRCNM believes Leo Cullen doesn't get the credit he deserves as Leinster Head Coach. #BATvLEI #HeinekenChampionsCup#VMTVRugby pic.twitter.com/JlNDxsm6qT

He is probably the most outstanding indigenous Irish coach of the professional era as far as results go, cups and trophies in cabinets.

There is this ridiculous fallacy that he sits up in his office drinking coffee and Stuart [Lancaster] does all the coaching. I just find that so frustrating and ignorant.

He pulls that coaching team together to win games. He has got his own style of doing that. To think that Leo doesn't know what is going on or someone else is running it, that's just plain ignorance.

There are a whole load of ways to coach. Rod Macqueen and Ian McGeechan, they weren't technically on the field doing it, they had other like Jim Telford doing all the technical work for McGeechan.

There are a whole lot of ways up the mountain. He has taken that team in a way up the mountain that is quite brilliant. He deserves a lot more praise from the Irish public.

Stuart Lancaster has played a big role at Leinster since his arrival in 2016, with many labelling him as the mastermind behind the team's success.

Such a suggestion does seem unfair to Cullen, who oversees the whole operation at the RDS. Another big year with the province would make his achievements more difficult to ignore.

SEE ALSO: People Couldn't Get Over The Officiating In Castres' Loss To Harlequins 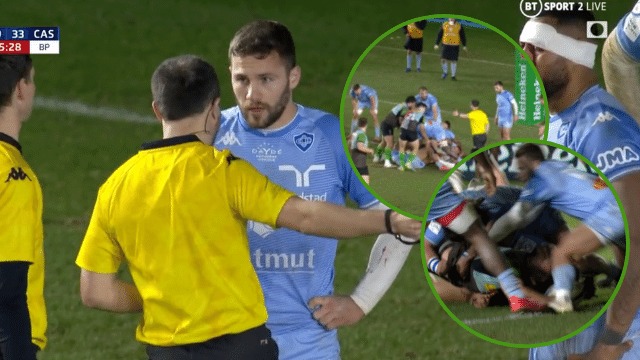 Rugby
1 day ago
By Luke Delaney
Quiz: Can You Name Every Leinster Player To Score A European Cup Final Try?
Rugby
2 days ago
By Eoin Harrington
Ronan O'Gara Says Lions Rejection Has Pushed Johnny Sexton
Rugby
6 days ago
By Gary Connaughton
Ronan O'Gara As Worried About Top 14 Clash As He Is About Champions Cup Final
Previous Next