After the high of the St. Patrick's Day Grand Slam win for the Irish rugby team did not come the fall this weekend. Instead, Leinster and Munster - both favourites heading into their Champions Cup quarter-finals - emerged on top in their respective ties against Sacarens and Toulon.

Leinster's victory was completed with an ease similar to Ireland's win against England. Munster did so with a performance which kept you on the edge of your seat and a finish which set the heart racing.

Writing in The Times, Owen Slot said reigning European Champions Saracens did not underperform, they were simply beaten by the better team.

"Dublin is one of the hardest places for an away side to win, and Saracens found it impossible to smash their way through this Leinster team. Saracens may have lacked a little inventiveness and smartness of execution, but they went out fighting to the end.

"This was no cataclysmic underperformance, the likes of which we have seen from England recently. They were just mastered by a group of players on a phenomenal roll, playing powerful, smart, accurate rugby with a huge defence that coped with wave after wave of attack in the first half."

In the same paper, Stuart Barnes penned a love letter to Dan Leavy. Barnes pines for England to have an openside who can affect the breakdown like Leavy has for Ireland and his province.

He also praised Leavy's chop tackles, his ability to keep the ball alive in the tackle and running lines which he says are those of an international centre.

"He needed bad luck for Seán O’Brien and Josh van der Flier to find his way into this rarefied rugby world where his old-fashioned virtues and state-of-the-art physical conditioning have made him Europe’s outstanding newcomer. Not to mention a perfect example for Jones to follow.

"It is time for England to pick the No 7 with the best potential rather than fudge the issue with alternative plans. For Ireland and Leinster the only problem is what happens when O’Brien is fit. Some problem."

In The Telegraph, Daniel Schofield wrote that he can see Stuart Lancaster's touch on this Leinster attack.

Leinster’s reward is a return to the Aviva Stadium to face Scarlets in the semi-final. And there can be no complaints. For all the focus on the benefits of the extra rest that Ireland’s players have enjoyed this season, it was a matter of finesse rather than fitness that proved the difference.

Saracens had no match for the imagination of Isa Nacewa and Garry Ringrose in midfield or the untamed ferocity of Tadhg Furlong and Dan Leavy in the pack. Their tries, scored by Ringrose, Leavy and James Lowe, were all gloriously designed and wonderfully executed. All three bore the fingerprints of Stuart Lancaster, the deposed England head coach restoring his reputation as senior Leinster coach.

Midi Olympique's Lucas Merinho wrote that Leinster are now favourites to win the competition. Merinho said that Leo Cullen's side are impressive in all areas; varied in attack and tough to handle in defence.

'Toulon Crucified' reads the headline in Midi Olympique regarding the French side's defeat to Munster. 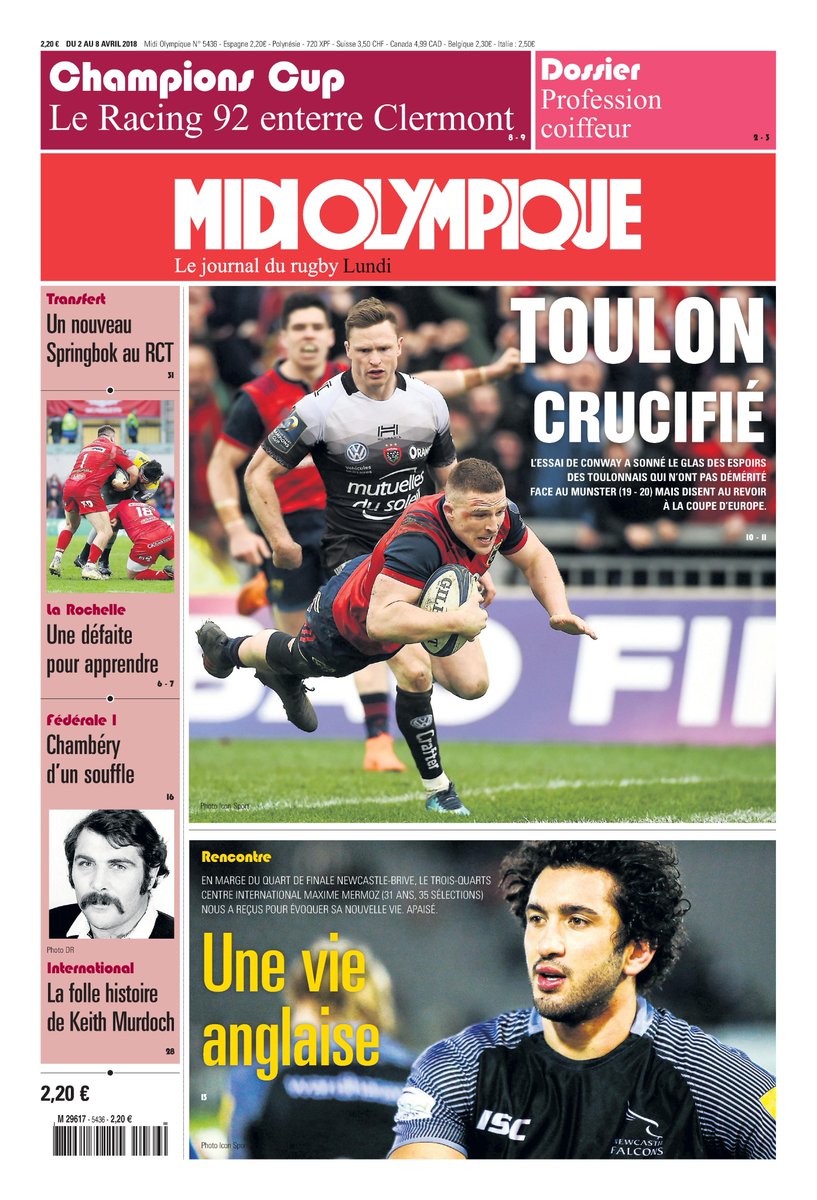 'The Hour of Regrets' was the headline in L'Equipe. 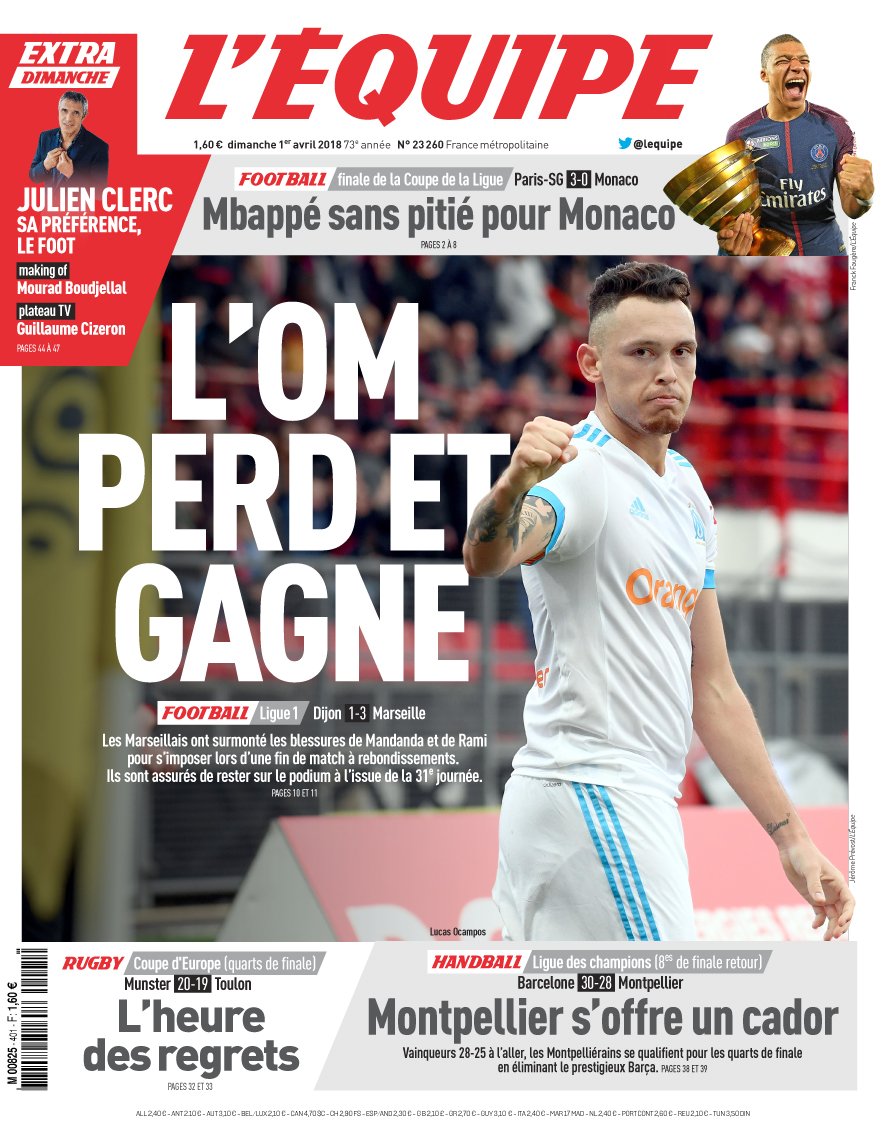 Under the L'Equipe headline, 'Tragicomedy in four acts for Toulon', comes a summary which partially blames the Top 14 team's defeat on refereeing errors.

"Toulon leaves the competition, beaten by one point in the last minutes of a big match of European Cup. Still, Toulon errors, unacceptable at this level, combined with questionable arbitration decisions, will be long regretted by RCT."

In a seperate article, Richard Escot questioned the length of time it took for Nigel Owens and the TMO to make a decision regarding Conor Murray's first half try.

In The Telegraph, Brian Moore wrote that he could understand French frustration with the officials and not just regarding TMO decisions - there was also the failure to spot Peter O'Mahony's boot in the Toulon scrum late in the game. Though, Moore says what ultimately cost Toulon were their own errors.

The seemingly interminable ruling on the Conor Murray try, where Guilhem Guirado was ruled to have knocked on, contrasted sharply with the scant time it took officials to dismiss any notion that Simon Zebo had deliberately knocked the ball out of Chris Ashton’s hands as he threatened a score in the first minute.

Stuart Barnes, writing in The Sunday Times, said the Munster bench - and especially John Ryan - coupled with the Thomond Park crowd made the difference for Johann van Graan's side.

"John Ryan has been one of the outstanding performers for Munster in the last couple of seasons and you could sense all his frustration at not being selected to start this game as he and his fresh colleagues set a surging scrum straight through the Toulon ranks.

"This was impact substitution at its best. It was probably also the 24th man in action. The scrum felt like it came from every terrace and every seat in the stadium. It was a moment of artisan ecstasy."