Mike Brown Sent Off For Shocking Stamp Against Wasps

Mike Brown was sent off early in the second half of Harlequins' victory over Wasps on Sunday.

The 35-year-old stood on the head of Wasps hooker Tommy Taylor.

With Brown due to leave Harlequins at the end of the season, and there four rounds of the Premiership left to play, it could be the end of the fullback's Quins career depending on the length of the ban which he gets for the card. Brown has signed on to play with Newcastle next seaosn.

Wayne Barnes was the official to send off Brown. It did not take long after the incident was highlighted by the television match official for Barnes to establish the necessary punishment.

"Placement is not in doubt, but it's just what's caused it. Has he been pulled onto him?" said Barnes as he watched the footage.

"It's not like he's off balance there. He's kicked out with his foot.

"It's just reckless, isn't it? It's high reckless. He's stood down and it's on someone's head.

"He's aware that there's a player around him."

Red for Mike Brown and that could be the end of his Quins career. pic.twitter.com/i9UnPY1V9o

Despite being reduced to 14 players, Harlequins did go on to win the game. They led 24-22 at the time of the red card but Wasps held an eight-point advantage by the 72nd minute.

It was then that Marcus Smith took over. The out-half kicked a penalty, scored a try and kicked a conversion with the final play of the game to seal a remarkable 48-46 victory.

What a performance. What a player. What a match. 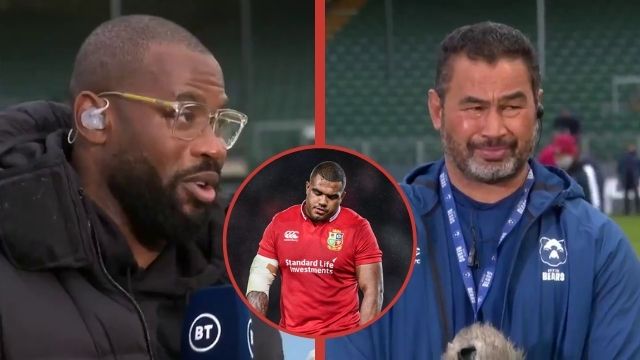