Catt, who memorably lifted the Webb Ellis Cup with England in 2003, was 36 when he started his country’s World Cup final defeat to South Africa four years later.

Ireland captain Sexton revealed this week he hopes to be part of Andy Farrell’s squad for the 2023 tournament in France, by which time he will be 38.

Catt, who retired from international action after being beaten by the Springboks, can relate to Sexton’s situation and has seen no evidence to suggest his ambition cannot be realised.

“I went until I was 39 (at club level), so I understand what he’s going through,” said Catt.

“The big one for Johnny is enjoying his rugby. He’s a huge figure within the team, he drives the standards, we all know what Johnny is about.

“He thoroughly believes in what we want to achieve as a group of coaches. There’s nobody more passionate than Johnny when he puts on that Irish jersey.

“Depending on injury and everything that goes with it, sometimes it’s out of your control. But, at the moment, where he is mindset-wise, he’s very well capable of it, yes.

"Hopefully we can really cement what we're about as a group and go out and play the way we want to play." ? ?

Versatile back Catt represented England 75 times between 1994 and 2007 before finally ending his club career in 2010 following lengthy spells playing for Bath and London Irish.

The 49-year-old, capped once by the British and Irish Lions, feels he and Sexton possess similar mentalities in their dedication to the sport.

While he acknowledges desire is a major factor behind a sustained career, Catt warned form ultimately decides the fate of every player.

“He’s all about rugby and he’s massively passionate about the game, about Leinster, about Irish rugby.

“If you’re in a good frame of mind then there’s no reason why you can’t carry on performing – but you have to perform.

“There are no excuses about it. If you’re not in form then you don’t get picked.”

In contrast, his direct opponent, Jaco Van Der Walt, will make his international debut in the Scottish number 10 jersey, having completed his residency qualification.

Catt – who, like Edinburgh playmaker Van Der Walt, was born in South Africa – anticipates an intriguing battle between the two fly-halves.

“First of all, congratulations to Jaco for getting his chance, his cap. He’s played well for his club,” said Catt.

“It’s great that Gregor is trying these new players out – a little bit like we’ve done, new faces that have come in to see if they are capable of performing.

“It’s massively exciting for Jaco to come up against somebody like Johnny Sexton, who has been around for so long.

“I think Johnny will all be about the performance the Irish need to put in – he’s very, very focused on that, like he is every single time he puts that jersey on. We’ll see how it goes tomorrow.”

SEE ALSO: Ronan O'Gara Admits There Was One Game He Didn't Want Ireland To Win 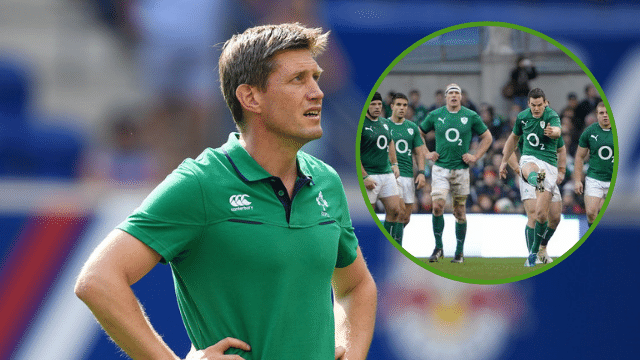