A new system has been devised to give the probability of what stage each team competing in next month's Rugby World Cup will reach. The model makes Ireland the third most likely team to win the Webb Ellis Cup.

A recently launched website RugbyVision.com has been specifically devised by MIT economist Dr. Niven Winchester to predict the success of each team at this year's Rugby World Cup.

It uses a series of complex algorithms that involve the creation of an accurate rugby ranking system combined with the ELO-system which was first used to rank chess players but has since been used to great success in many other fields.

The model provides an estimate of the "average" margin between two teams, the percentage of victory is predicted by a team's ranking combined with the likelihood of the margin being correct. It also makes points predictions in each match and outcomes are updated minute-by-minute throughout the World Cup based on points scored and other occurrences.

Unsurprisingly New Zealand are heavy favourites to win become retain the Webb Ellis Cup with a 42.6% chance of success, while the system also predicts that while it's highly like that Ireland will meet England in the semi-final. However, the hosts are the more likely to reach the final and have a 26.8% chance of winning it.

Joe Schmidt's side have a 66.3% chance of a World Cup semi-final appearance, are 28.6% likely to reach the final and are third favourites to win the World Cup with an 8% chance. The predominant factor in England having a much higher likelihood than Ireland is that the system makes home advantage a crucial element. 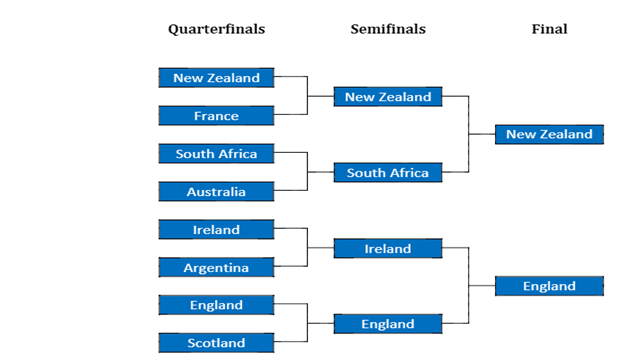 Rugby
3 weeks ago
By Michael Bolton
'Go F**k Yourselves': Spanish Media Not Taking World Cup Disqualification Lying Down
Rugby
6 months ago
By Balls Team
When The Rose Of Tralee Was Ireland's Rugby World Cup Anthem
Rugby
8 months ago
By Jonathan Byrne
All You Need To Know About Ireland's Rugby World Cup Qualifier Vs Scotland
Popular on Balls
Football
6 hours ago
By Eoin Harrington
Juan Mata Questions Manchester United Management After Dire Season
Golf
2 days ago
By Gary Connaughton
Padraig Harrington Glad He Didn't Have To 'Make A Decision' On Saudi Golf League
Football
1 day ago
By Gary Connaughton
The Frank Lampard Love-In After Everton's Survival Was Downright Bizarre
GAA
2 days ago
By PJ Browne
'It Came At An Awkward Time. I Didn't Think It Would Be So Bad'