The Last Munster Team To Win Silverware: Where Are They Now?

It's now 10 years since Munster last won a trophy. Leinster were the opponents that day as Munster triumphed 19-9 at a packed Thomond Park in the final of what was then known as the Magners League.

The victory - Munster's third title in the competition - stopped what would have been a Leinster double. A week earlier, they'd come back from 16 points down at the break to beat Northampton in a famous Heineken Cup final.

We've taken a look at the careers of those Munster players since that game.

Four years on from that final, aged just 28, Jones was forced into retirement due to a neck injury.

He quickly moved into coaching with Munster, initially as a technical coach, later becoming the attack coach. Jones left the province in the summer of 2019 and went on to be a part of South Africa's World Cup-winning coaching staff.

SA Rugby Mag reported recently that Jones is now based in Europe with specific role to "liase with South African players abroad to make sure they are aligned with Rassie Erasmus" long-term strategy".

The former All Black retired from rugby in 2013 but continued his relationship with Munster, becoming the province's Head of Commercial and Marketing.

"It has been an extraordinary 11 years living in Ireland and I will always treasure my time in this special and unique club, and in Irish sport, academia and business," he said at the time.

In 2019, Howlett was the high performance lead for the Cork hurlers under the management of John Meyler.

Two years after that Magners League final, Danny Barnes departed Munster for Newcastle. Three years on from that and aged just 26, he decided to end his pro rugby career. Barnes continued to play semi-pro with Chinnor. He now works as a project engineer and lives in England.

Balls spoke to the New Zealand-born Kerryman last year about his time with Munster, why it didn't work out for him there, and his time in England.

The New Zealander left Munster for Perpignan in the summer of 2012. He spent six years with the French side before returning to his homeland to play a season with Manawatu. He retired from rugby in 2019.

Now 33, Earls is still playing well for Munster and Ireland. He recently signed a new one-year deal with the IRFU.

After hanging up his playing boots in 2013, O'Gara embarked on a coaching adventure. It began with Racing 92 and took in time in New Zealand with the Crusaders. He's currently head coach of French Top 14 side La Rochelle. Next season, with Jono Gibbes departing for Clermont, the Corkman will be head of the team.

The scrum-half was just a year on from his Munster debut when he started the final. A decade later and he's still first choice for the province.

Horan was a Munster lifer, playing 14 years for the province. He retired in 2013 and now works as Player Development Manager for Munster. The Clareman helps young players transition to the professional lifestyle and older ones as they edge towards retirement from the game.

Aged just 31, the hooker was forced to retire from rugby due to a persistent foot injury in early 2015. The Limerick man made 121 appearances for the province.

He now works in investment management. 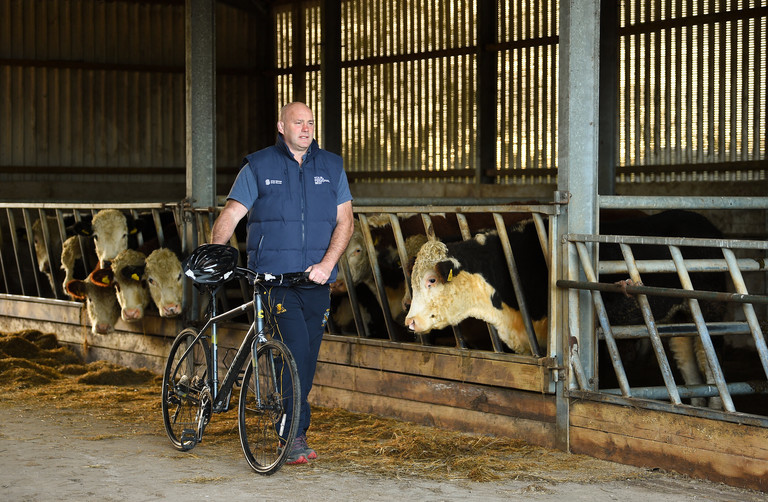 John Hayes at home on his farm in Cappamore, Co Limerick. Photo by Diarmuid Greene/Sportsfile

Initially, the plan had been that Hayes would bow out following the final. However, he signed a short-term deal to serve as cover during the 2011 World Cup. His last game for Munster was on St Stephen's Day. 'The Bull' left the Thomond Park pitch to standing ovation in a win over Connacht.

He now works on his suckler farm in Cappamore.

The second row left Munster in 2015 but his career rolled on for another three seasons at Premiership side Worcester Warriors. Then in his late 30s, O'Callaghan was named Worcester Supporters' Player of the Year for the 2015/16 and 2016/17 seasons. He retired from the game at the end of the following season having helped Worcester stay in English rugby's top tier.

He can now be seen on RTÉ's 'Ireland's Fittest Family' and heard on 2FM. He recently moved from sports show Game On to the station's breakfast show. 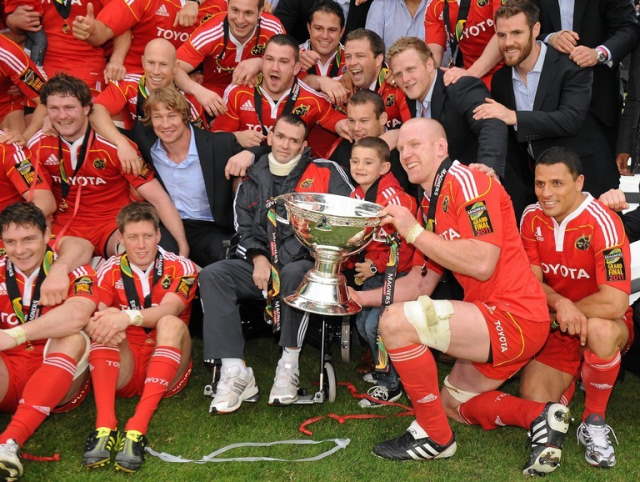 28 May 2011; The Munster team, with Paul Darbyshire and his son Jack Darbyshire, celebrate with the cup after victory over Leinster. Picture credit: Diarmuid Greene / SPORTSFILE

Three weeks after the final, Munster players, staff, and fans were in mourning following the death of strength and conditioning coach Paul Darbyshire. The previous September, Darbyshire had been diagnosed with Motor Neurone disease. Fittingly, Darbyshire and his son Jack got to celebrate the victory on the pitch with captain Paul O'Connell and the team.

O'Connell's Munster career ended at the conclusion of the 2014/15 season when he was released a year early from his contract with the IRFU to sign with Toulon. However, due to a serious hamstring injury suffered against France at that year's World Cup, O'Connell never played for the French side. Confirmation of his retirement from the game came in early 2016.

In 2018, O'Connell moved into coaching, joining Stade Francais but stayed there for just a season. He is now Ireland forwards coach, a role he took up before the 2021 Six Nations.

The Tipperary man left Munster in 2017 to join French side Racing 92. He's twice been a Champions Cup runner-up during his time in Paris. Recent reports suggest that his time with Racing 92 may be up. Though, the 37-year-old has been linked with other French sides.

The backrow retired from rugby at the end of the 2011/12 season due to a knee injury picked up in a World Cup warm-up game against England the previous year.

The Corkman left Munster at the end of the 2013/14 season and joined Pau. He spent three years as a player with the French side before moving into coaching. After two years as a coach with Pau, he moved to Provence. Coughlan is now lineout and defence coach with Top 14 side Brive.

The hooker retired from rugby in 2019 aged 31 after 10 years playing for Munster.

"The prospect of possibly picking up another contract was something I was very much pursuing but the longer it went on, the more I realised my body was telling me to stop," he explained.

"I've ignored existing injuries for a long time, but I can no longer do so. The maintenance involved in just being able to train let alone play has taken its toll on my body these last couple of years. I would love to continue playing but I simply can't anymore. I feel I'm physically incapable of getting back to my best and I want to be healthy for my young children."

He now works for Waystone and was a coach with Garryowen last year. He also works as a pundit with TG4.

The South African left Munster in 2013, initially returning home to South Africa. He signed for Lyon later that year and spent three years with the French side. Aged 33, he retired from rugby in 2016 and became a financial advisor.

The tighthead prop is now in his 12th season with Munster. In late 2019, the Corkman became the 11th player to reach 200 appearances for the province. He recently overtook Marcus Horan as he moved into fifth on the all-time Munster caps list.

Due to a hip injury, the Tipperary man was forced into retirement a year after the final aged 30.

He went on to work with Rockwell College, Garryowen in the AIL and Munster underage teams. He was also part of the backroom team when the Tipp hurlers won the 2016 All-Ireland title.

Leamy joined Leinster as their elite player development officer in October 2019. In January, he joined the Ireland U20 coaching team.

The backrow was forced to retire from rugby in April 2014 due to a knee injury sustained during a Munster training session the previous October. 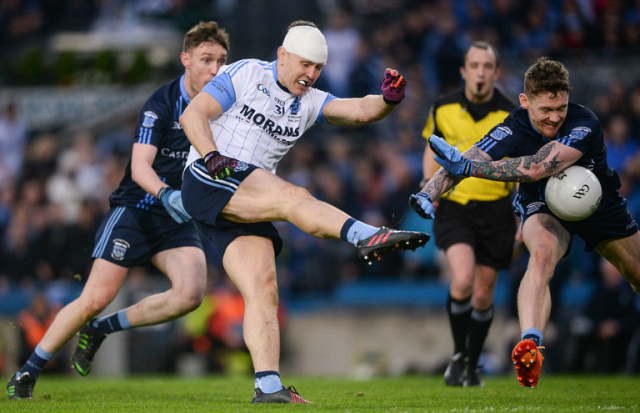 Ronan subsequently completed a degree in strength and conditioning. He founded Titan Wellness in 2015, a company which runs health and well-being programmes for organisations.

He is also the strength and conditioning coach for the Meath footballers. In 2016, he won a Meath IFC title with St Colmcilles and dedicated the victory to former Munster teammate Anthony Foley who had died a week previous. Colmcilles lost the 2017 All-Ireland IFC final to Westport.

The scrum-half's final game for Munster came in 2011 against Ulster. Later that year, he went on loan to Saracens and then to Newcastle. He joined Bath in 2013, Sale in 2015 and Worcester for the 2017/18 season where he played alongside Donncha O'Callaghan.

The game was Warwick's last appearance for Munster. The Australian left for Stade Francais that summer. He spent two years in Paris before joining Worcester for the 2013/14 season. Aged 33, he was forced to retire from rugby in May 2014 due to a neck injury.

Warwick spent a year as part of the coaching staff at Worcester after which he returned to Australia where he now works as a PE teacher in his native Brisbane.

After five seasons with Munster, the Kildare man retired from rugby in 2015 aged 30.

He is now head coach of Newbridge College and Sales and Rugby Director of PSA Academies.

The Australian left Munster at the end of the following season to become defence coach for the Wallabies. In 2013, he was appointed head coach of Super Rugby side Melbourne Rebels. He joined the Queensland Reds as assistant coach in 2017.

Quiz: Name Every Full Irish Rugby International Of The 2010s 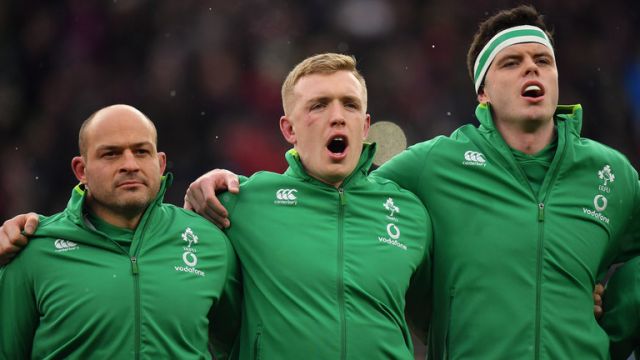