Leinster have beaten Munster 13-10 in the PRO14 this evening, scoring a wonderful team try late on to overcome an early deficit.

Leinster entered this game looking for their fifth consecutive win over their provincial rivals, which would equal the record for the longest winning streak in this fixture.

However, they would quickly find themselves 10-0 after Munster got off to a flying start. Tadhg Beirne would score the first try of the game in the 12th minute.

Tadhg Beirne drives over for the first try of the night in Limerick. JJ Hanrahan converts from under the posts.

From this point, Leinster would have most of the territory. They quickly responded with a penalty from Johnny Sexton and would go close to scoring a first half try on a couple of occasions.

However, some heroic defending from the home team managed to keep them at bay.

Sexton would score a second penalty with the last act of the first half to make the score 10-6 at the interval.

Leinster's chances seemed to have suffered a major blow when Sexton was forced off with an apparent hamstring issue just over ten minutes into the second half.

The home side continued to show incredible resolve in defending their own try line. A huge turnover from Tadhg Beirne just before the hour mark was the perfect example, with the second row getting his third steal of the night.

However, Leinster would not be denied for too much longer.

They produced a stunning team try in the closing stages to take the lead for the first time. Jordan Larmour was the man who touched down, finishing off a cracking team move from a line-out.

Jordan Larmour scores a try in the corner, and Ross Byrne kicks what could be a crucial conversion from the touchline.

Ross Byrne would then nail the conversion from the sideline to extend the lead to 13-10. This would ultimately be the difference between the sides.

It also extends their winning run over Munster to five games, matching the streak they had between from 2009-2010. 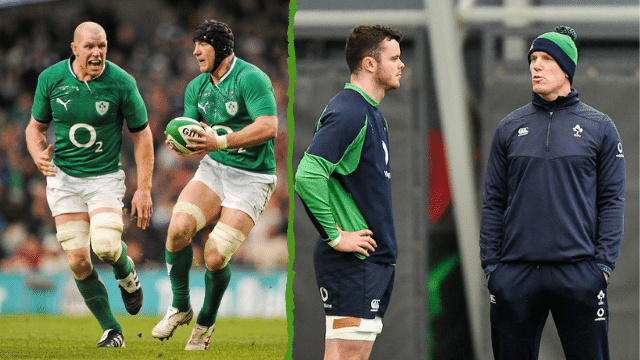 Rugby
1 day ago
By PJ Browne
Sexton Plans For Post-Rugby Career With New Deal 'Nearly' Signed
Rugby
1 month ago
By Eoin Harrington
How To Watch Munster v Leinster In The Pro 14
Rugby
2 months ago
By Balls Team
PRO14 Match Between Munster And Leinster Postponed
Popular on Balls
GAA
17 hours ago
By PJ Browne
'I Have Pictures Of Stephen Cluxton All Around My House, It’s A Bit Weird!'
Rugby
18 hours ago
By Balls Team
Son Of Offaly Hurling Legend Set For Super Rugby Debut
The Rewind
16 hours ago
By Sean Meehan
Introducing The Vote For Ireland's Greatest Singalong Song
Rugby
14 hours ago
By Eoin Harrington
Rob Kearney Player Mic Gives Great Insight On Western Force Debut