Munster have run out 27-3 winners over Leinster in their Rainbow Cup opener at the RDS this evening, ending a long unwanted run in the process.

Leinster had come out victorious in each the previous six meetings between the teams, the longest winning streak in the fixture's history. Munster had also gone winless in Dublin since 2014.

This was seen as an excellent chance to put an end to that unwanted record, with Leinster naming a weakened side ahead of their Champions Cup semi-final against La Rochelle next week.

The visitors got off to a dream start in the game, scoring a try in the fifth minute. Damian de Allende was the architect, producing a powerful run through the middle before offloading the ball to Conor Murray to finish off an excellent move.

Munster score the opening try through Conor Murray, after Peter O'Mahony turns the ball over in midfield.

Their task was made a bit more difficult just after the half hour mark after Stephen Archer was sent to the sin bin for stamping on James Ryan.

However, Munster would actually extend their lead to 10-3 while down to 14 men.

Joey Carbery kicked a second penalty 12 minutes into the second half, with Leinster failing to provide any real attacking threat up to that point.

Munster would land the killer blow just after the hour mark. Conor Murray was the man to score the try, but Gavin Coombes will earn plenty of plaudits for his remarkable offload in the buildup.

Conor Murray scores his second try, after Chris Farrell gets on the end of a brilliant Gavin Coombes offload in the build-up.

The result was never in doubt from this point on, with a late penalty try after Cormac Foley collapsed a maul adding a bit more gloss the scoreline.

While this game was not in the most important competition and the opposition were only at half strength, Munster will no doubt be thrilled to get Leinster monkey off their back.

Leinster will now be looking ahead to their meeting with La Rochelle next weekend, while Munster's next fixture will be against Ulster on May 8th. 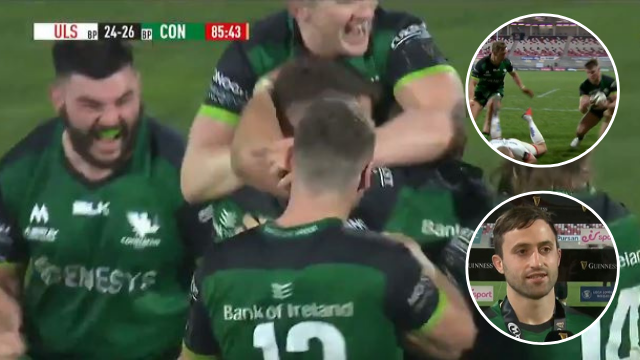