It was another week of heartbreak for Munster, as they fell to a crushing defeat to Toulouse in a classic Heineken Cup last-16 tie in Thomond Park. Despite a brilliant team performance, Toulouse's brilliance saw them over the line towards the end of the game.

The first-half saw a return to form for Munster after last Saturday's disappointing performance against Leinster in the Pro14 final. The passing was crisp from the backline and CJ Stander and Jack O'Donoghue both had big turnovers towards the end of the half.

Nonetheless, it was a slow start for Munster. Chris Farrell was sent to the bin within the first three minutes and the resulting penalty was an easy 3 points for Romain Ntamack. Joey Carbery and Romain Ntamack traded kicks, to leave the game at 6-3 before a moment of brilliance from Keith Earls.

After a quick and clinical Munster break, Earls muscled his way over the line from 5 metres out to score a sensational try and put Munster in front, though Carbery missed the resulting conversion.

The momentum was going Munster's way, and Earls was yet again the scorer after a brilliant break from de Allende brought Munster into the Toulouse 22. Conor Murray's pass found Earls in acres of space and the Limerick man touched down for his second try.

Carbery again missed a tough conversion, but he and Ntamack again traded penalties and Munster went in at half-time 13-9 up after a brilliant first-half performance.

Keith Earls in the corner for @Munsterrugby again 🔴

Sensational from Damien de Allande in the build-up and the home side are rolling at Thomond Park!#HeinekenChampionsCup pic.twitter.com/4orslsiUdq

It was an electric start to the second-half for Toulouse, though, as a perfect kick from Romain Ntamack sent Matthis Lebel in to the corner for a brilliant try. Only two minutes in to the second half, Munster's hard work had been undone and the sides were level at 16-16.

In classic Munster fashion, they were riled into action and the next ten minutes saw a brilliant period of pressure in the Toulouse 22, before Gavin Coombes went over for a fantastic try from a tap-and-go with half an hour left.

"If you saw that in a U10s match you'd understand!"

There's something beautiful about the "schoolboy style" tap-and-go from the ground resulting in a try for @Munsterrugby 💪#HeinekenChampionsCup pic.twitter.com/lD8JDDdunW

All watching must have missed the iconic Thomond Park crowd, and we can only imagine how they would have loved the performance from Munster, who took the fight to a stacked Toulouse side. This definitely looked like a Munster team who had heard all the criticism of their Pro14 final performance over the past week.

All that being said, the teams were once again level with 25 to go and Munster were lucky not to have Earls in the bin after he caught Cheslin Kolbe's leg in the air. Toulouse made the most of the penalty in the Munster 22 and went over for their second try, tying the game up at 23 all.

This was a Heineken Cup classic and for the next ten minutes the momentum ebbed and flowed between the teams. JJ Hanrahan landed his first kick of the day after 66 minutes to put Munster 3 up, but they might have been disappointed not to come away with a try - especially given Brian O'Driscoll on commentary for BT was calling for a sin bin to accompany the penalty.

It was inevitable, though, that the brilliant Antoine Dupont would pop up eventually. Matthis Lebel left JJ Hanrahan for dust with a brilliant sidestep and Dupont ran over for an easy try under the posts. After Ntamack's conversion, Munster were left 30-26 behind and chasing the game with little over 10 minutes left.

Toulouse at their blistering best as Matthis Lebel leaves his defender in the dust before feeding Antoine Dupont!

Wait for the slow-mo, that is just rude 🔥#HeinekenChampionsCup pic.twitter.com/4ZHjDB9WnQ

Toulouse added insult to injury in the final ten minutes, as Munster lost all sense of composure. Ntamack kicked another penalty to put Toulouse seven clear, before a comedy of errors led to Dupont adding a second try and finishing off the game. Gavin Coombes added a second try for himself with the clock in the red, but it was too little too late.

Toulouse march on to the quarter-finals ⚪️

A brilliant contest, Munster pushed right to the end but the star power of the French side made the difference.

The performance from Munster was much better than last week's, and the 14-point margin would have been an unfair representation of how tight a contest it was. After such hope for silverware this year, finishing the season with two crushing defeats in two weeks is a heartbreaking finish for Munster fans, and they must be asking what more they have to do to bring a trophy back to Thomond Park again.

It was a heartbreaking loss for Munster and leaves Leinster as the only Irish team still in the competition for the quarter-final stage.

SEE ALSO: The Internet Is In Awe Of Ronan O'Gara After This Interview 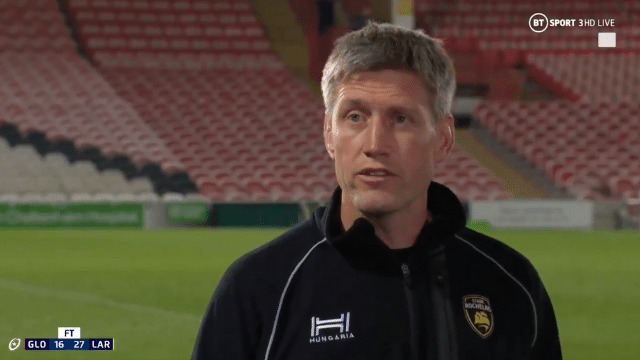