The Munster Player Ratings From A Bonus Point Win In Gloucester

A visit to Kingsholm was never going to be easy for Munster. A look at the scoreboard tonight might suggest it was just that though.

In truth, Munster had it slightly tougher than it seemed. They led 20-3 at half time, 41-15 at full time, and had a bonus point secured with just under 20 minutes remaining. That doesn't tell the full story and Munster weren't comfortable until the final quarter. They also had the help a referee in Roman Poite who the home fans weren't best pleased with.

That said, Munster were better than their opponents in every area. The scrum dominated throughout, the kicking game bamboozled the Gloucester back three and the defence was frantic. Even when beaten, like the first try for the English side, Munster came out in credit, holding out for an incredible 35 phases on the goal line before the line finally broke.

All in all, Johann Van Graan and the Munster fans couldn't have asked for more from a Champions Cup away game in England. A full strength team at last, 5 tries, putting a home quarter final in their own hand, and, without doubt, the best performance we've seen from out-half Joey Carbery in the weird green of Munster.

Carried well throughout, constantly involved and near the ball, as usual. Also did his part in a dominant scrummaging performance from Munster

Was furious with his pack after a mix up on his only lineout mix up late in the first half, but other than that, a fine lineout performance from someone often criticised for that aspect of his game. Lively in the loose and in defence, Scannell consistently dispayed leadership qualities in a pack full of leaders. 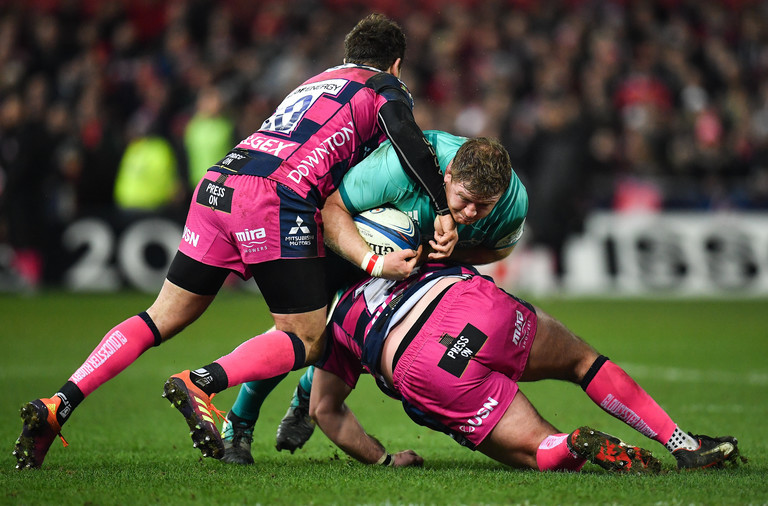 A huge scrummaging performance from Munster was down mainly to Archer, who made it a long night for poor Josh Hohneck. Made an outstanding goal line stop protecting his post during the second half too. Joe Schmidt will have taken note of Archer's performance tonight.

The Munster second row were simply outstanding tonight. For Kleyn at times was unplayable. In carries, big hits, and on the ground, he was phenomenal throughout, never far away from the action.

How many times has Kleyn stopped a Gloucester player dead and sent them backwards? Phenomenal performance. #GLOvMUN

Quickly becoming a real talisman for Munster, Beirne was everywhere tonight. Creating turnovers on a seemingly regular basis, his move into the backrow when Peter O'Mahony went off seemed to turn his performance into even more of a POM-like display. Unlucky to be told to move when it a legal position by Poite in the incredible 35 phases that Munster held Gloucester out for before their first try, his performance in those phases showed how Beirne has become the defensive leader of this team already.

Tadhg Beirne is everything Munster hoped he would be. And more. What a player.

O'Mahony didn't have his usual marquee moments in the game, but was involved in everything good Munster did for 46 minutes. Unfortunately, he wasn't available in the last half an hour, and for a while it seemed that Munster would miss him, until Keith Earls' try put the game beyond doubt.

A quiet performance from a player who hasn't seen much game time recently and Munster will be just delighted to have back on the pitch.

Huge carries throughout the game as usual from Stander. His first break, one of four in the move, for the first Munster try epitomised his impact he had on that move and the game in general.

Murray looks close to his best again. His box kicking made fools of the Gloucester back three, especially full back Tom Hudson. His quick thinking in watching Roman Poite's signal and turning over his opposite number at a ruck was a huge moment in the game, ending a run of pressure from the home team, and setting up Munster for what would eventually lead to the Keith Earls' sealing try.

Watching the Murray Carbery axis developing over the rest of the season is going to be one of the most enjoyable things to watch between now and May. 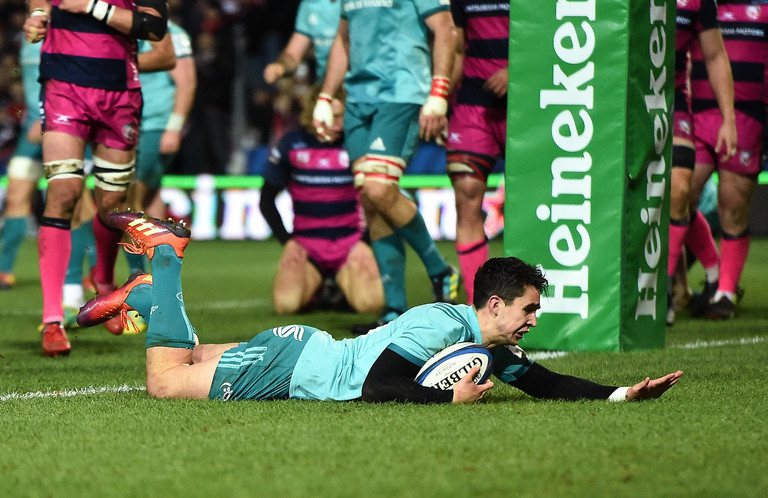 After a quiet start, a beautiful kick through to the corner caused mayhem for Gloucester after 15 minutes and seemed to settle both Carbery and Munster.

From there, he was everywhere. Another 100% kicking performance, his third in a row, summed up the kind of confidence the out-half is playing with. From his beautiful passing to his O'Gara-like defence splitting kicks, he had Gloucester on the back foot throughout. A moment of pure genius unleashed Conway to secure the bonus point try, and he finished it up, as you do on nights like this, running under the posts with a well read interception. 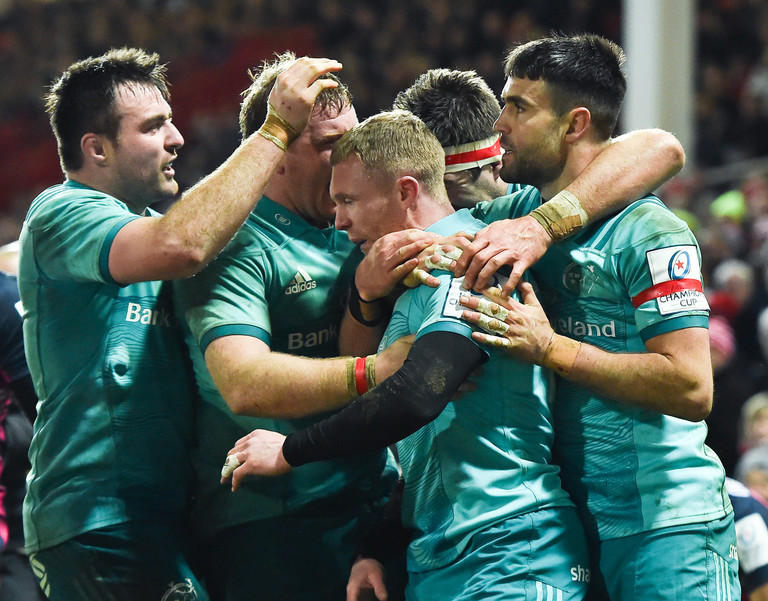 Didn't have much to do tonight, but when his chance came he was there. A winger's finish, his try came at a crucial time and the one time in the game when a comeback from the home team looked possible. Earls' try ended their hopes entirely.

42.33 was the time on the clock at the end of the first have when the other Scannell bounced off Charlie Sharples and went over for Munster's second try, effectively putting the game beyond Gloucester. It was a great finish in what an otherwise quiet, if solid, first half from the Cork man.

He continued in the same vein thoughout the final 40 minutes, showing why he's an automatic name on the Munster teamsheet.

The difference Chris Farrell makes for @Munsterrugby is incredible. Outstanding player. Unlucky with that offload #GLOvMUN

Munster fans have been waiting a long time to see Farrell back at this level. His role in the first Munster try, after a quiet start, showed the impact he has. Two huge, battling carries showed him to be the CJ Stander of the Munster backline, and opened up the vital space that would eventually send Carbery over for an easy finish.

He would continue to have high impact hits, and make high impact hard yards throughout the night. How happy are Munster to have this man back! 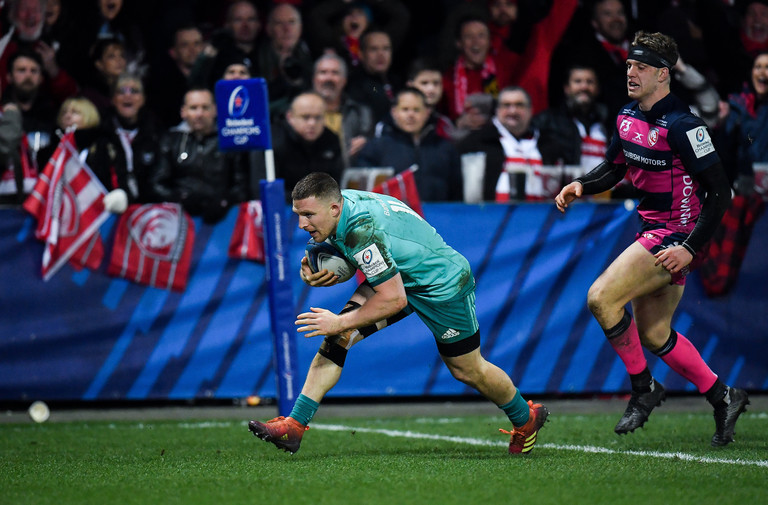 Conway created his own bit of genius in the second half, kicking on Chris Farrell's grounded pass to have a wonderful try cruelly disallowed. A few minutes later, it was Carbery's genius that finally secured that Munster bonus point. Conway though, as he was all night, was in the perfect winner's position for the finish.

The winger's brilliant performance was highlighted in the first half by his superb kick chasing. As good as Murray's box kicking was, Conway's chasing was just as good, and just as much a reason for the failings of the Gloucester back three.

Another solid performance from Haley who's locked down the number 15 for Munster this season.

The main impact came from Billy Holland, in the most unlikely of circumstances. After replacing O'Mahony, Holland's beautiful, aware offload to Earls created Munster's third try. Arno Botha had the most impact of the remaining replacements.