This Munster Side Now Has Its 'Northampton 2000', And Christ Knows They'll Be Back

Perhaps the most disappointing aspect of their defeat to Saracens was the fact that Munster barely threw a shot.

Their typical blood and thunder fare was prevalent in the first half but any modicums of momentum were curtailed by hesitancy, and an unwillingness - perhaps born of an inherent inability - to properly take this Champions Cup semi-final by the stones.

For the first time since October, Munster went to psychological war and, as a unit, were dominated by a superior collective force.

It's worth noting that Saracens left at least 15 points on the field due to gratuitous drops by Richard Wigglesworth, Chris Ashton and George Kruis respectively who, line agape, handed the home side three Houdini-like escapes. On such moments - one of them, even, not least three - do knockout ties tend to swing; we witnessed such ebbs and flows just three weeks ago with Willie Le Roux's inexplicable spillage onto the same Aviva Stadium turf, for instance, and we've seen similar on countless occasions throughout the history of this tournament.

But as many suspected prior to today's contest, Sarries are cut from a different metal to that of their Premiership counterparts Wasps - adamantium, perhaps, as opposed to steel. Not their own handling errors nor the thunderous Landsdowne roar - the latter which so recently contributed to the destruction of dominant English teams at both club and international level - left so much as a mental dent. The black tide was constant and merciless, and eventually engulfed the 15 red men paddling at its shores. 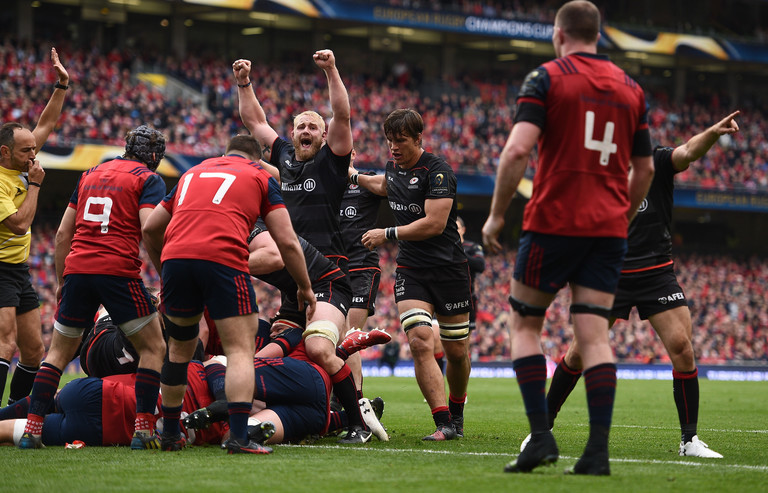 But for all their futility, Munster weren't out of their depth. Instead, they simply lost every juncture moment to an altogether wilier side who have partaken in five consecutive European semi-finals. A novel experience to many of Munster's matchday squad, such fixtures have been Sarries' bread and butter for half a decade. The Premiership and European champions had long since learned from Toulon having done to them in 2012 what they themselves inflicted upon Munster today.

The slings and arrows of a 15-minute spell to begin the second half would ultimately put paid to Munster's European season. After six minutes of unrelenting Saracens' pressure and a couple of poor clearance attempts by scrum-half Duncan Williams, Simon Zebo intervened as Sarries went wide, forcing a knock-on with a well-timed interception attempt only to deflect the ball forward himself. Had the Cork man gathered the ball as it bobbled skyward, he was home and hosed. A bone-shuddering roar greeted Munster's winning of a penalty from the resulting scrum - their first - and Tyler Bleyendaal marched them up the field.

This fleeting and fruitless visit, however, would be Munster's only possession in Sarries' territory for the first 14 minutes of the second half. Mere seconds later, they were back in captivity on their own goal line. An inexcusable botched clearance from Bleyendaal after expertly-executed blocking by his forwards appeared to form cracks in the dam. Moments later, Mako Vunipola burst it with a ferocious finish, and Munster were suddenly two scores behind. Even then, the deficit almost struck as insurmountable.

As for Bleyendaal, this was a proper nosebleed, and undoubtedly his poorest display in Munster red. Despite a sublime season, he suffered his own personal 'ROG vs Northampton' (the 2000 vintage as opposed to 2011), but his woes manifested themselves even beyond the tee.

Another juncture moment arrived on 65 minutes. Teetering on the brink and trailing by 13, Munster finally battled into Saracens land. Perhaps sensing they'd require more than brawn to will them over the line, a feverish home crowd took to its feet in unison, eyeballs protruding, fists aloft; one of the game's few 'come on ta fuck' moments of abandon in the stands. As soon as Munster's forward march stagnated somewhat, however, Bleyendaal desperately booted the ball almost vertically on two occasions to little avail.

Three minutes later, with Munster still down 13, he inexplicably attempted to drop a goal from all of 40 yards. Even with 12 minutes left, Munster might well have tipped the cap and extended their hands towards their adversaries as the Kiwi's kick dribbled short and wide of the right-hand post.

Bleyendaal's struggles were symptomatic of Munster's performance; Rassie Erasmus' men frequently shot themselves in the foot and conceded the ascendancy. And when Saracens bite your hand off, they tend to take the other one with it.

Conor Murray was undoubtedly a loss, although Duncan Williams' performance - kicking aside - was nowhere near as bad as the Twitter eejits made it out to be. Peter O'Mahony, too, was a loss when he was withdrawn, but even 80 minutes from both he and Murray might only have kept the 26-10 scoreline more respectable such was the magnitude of Saracens' performance. Munster's gameplan hasn't truly deviated all season, and even Murray's kicking game would likely have been rendered moot before long. 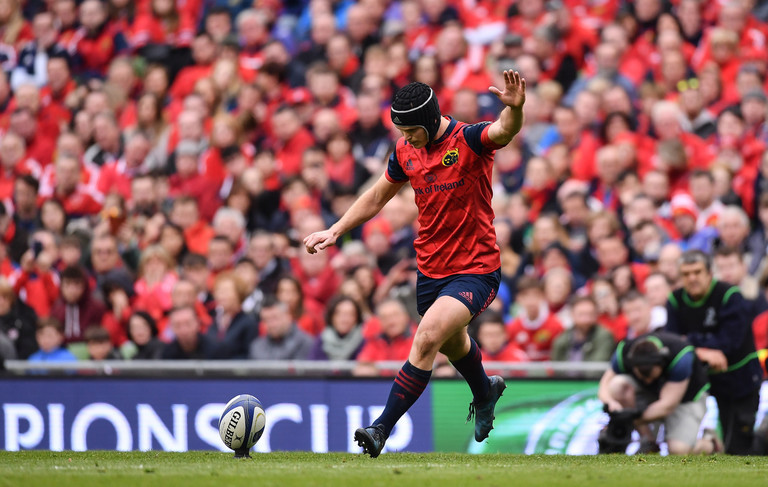 But with all of this taken into consideration, it's easy to forget that the disappointment which greeted Munster's defeat is a testament to their unforeseeable progress this season. Bleyendaal might have stunk the place out today, but has put both physical and mental fragility to bed to emerge one of the finest 10s in Europe. This was a man who, at a video session following Munster's woeful 24-7 defeat to Leinster at Thomond in December 2015, was forced to fight back tears such was the bollocking he received from an irate Peter O'Mahony, who faced the unenviable task of leading a soul-searching team meeting. Across less than 18 months, Bleyendaal's career trajectory in morphing from a quote unquote "10 that can't kick the fucking ball" into a formidable first five-eighth would suggest he'll respond in kind to inevitable criticism. His personal fortitude has been a microcosm of Munster's collective strength of character since October.

Munster's transformation in such gut-wrenching circumstances has been one of the year's most enthralling sporting narratives, but more importantly, such a platitude will mean literally nothing to them as they board the bus back to Limerick. To the credit of the players and Rassie Erasmus' coaching staff, Munster are now the team of winners that Anthony Foley was adamant they could become. Defeat to Europe's finest side doesn't change that, rather the reaction to such a defeat in the weeks and years to come may reinforce it. It did for Saracens in 2012. It did for ROG and Munster in both 2000 and 2002.

The melancholic chorus of Fields of Athenry which followed CJ Stander's consolation try might have been more reminiscent of Poznan in 2012 than Cardiff four and six years prior, but it was a watershed moment for this current squad. This was no boozed-up justification of the fans' journeys up the M50, and more a statement of intent from supporters who are ready for another decade-long European epic; an acknowledgement that, on countless occasions this season, their side had proved themselves worthy of the famous red shirt.

Make no mistake about it, Peter O'Mahony and Munster will be scarred by their shortcomings on such a stage, and particularly in front of such support. But as Munster have proved throughout their European history, scars are merely a reminder of past pain, and this particular Red generation has increased its threshold tenfold during an extraordinary season. The well into which they're forced to dip during future battles will be exponentially deeper.

Frankly speaking, they've recovered from far worse. For the men of Munster, this was merely the blot on the copybook which will drag an extra three yards out of heavy legs and tired minds in future campaigns. 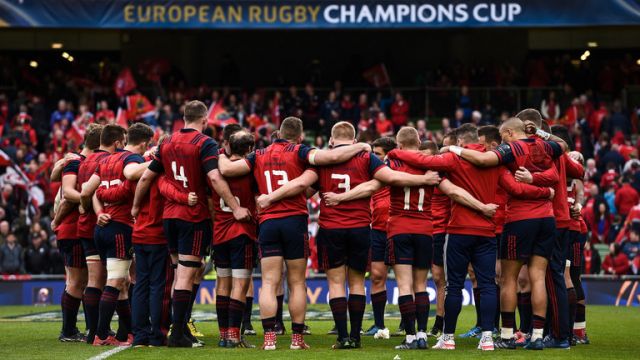