'Dreadful Way To Lose': Munster Bow Out On Placekicks

By the time kick-off came around, Munster fans and their players may have been thanking Ed Sheeran for his tuneful and addictive brand of music which had forced them to usurp their Champions Cup quarter-final clash with Toulouse to the Aviva Stadium in Dublin.

The Red Army was as loud as it’s ever been, as affordable ticket prices and accessible buses had paid huge dividends, and shades of Wasps 2004 in Landsdowne Road were in the air.

It wasn’t to be Munster's time however, and despite their best European performance under the tenure of the soon to be gone Johann Van Graan, it was a heartbreaking penalty shootout loss which decided their fate.

Munster And Toulouse Serve Up The Game Of The Season

It was the ‘home’ side who took an early lead as they capitalised on a couple of penalties given away by Toulouse and worked their way near to the opposition line. After a series of pick-and-go’s from the pack, it was 21 year-old Alex Kendellen who trundled over and set the tone for a what was a coming of age performance for arguably the brightest prospect in Irish rugby.

Luke Pearce going the extra mile for a view on a potential try 😂#HeinekenChampionsCup pic.twitter.com/oUgYoJCh6j

The variety and execution in Romain Ntamack's play meant Toulouse scored a try of their own just minutes later, with the outhalf orchestrating a linebreak and dotting down himself shortly after.

The Toulouse scrum then began to make itself known, and the territory and gainline advantage it gave them lead to a score from Matthis lebel who finished after a slick first phase move.

Toulouse threatened to pull away over the next 15 minutes but Munster held firm, and their mettle paid off when Keith Earls was put over in the corner by Joey Carbery after they had stretched the Toulouse defence to the point of no return.

The Toulouse scrum is something else 😬

A dominant foundation for a talented backline to go and attack...

Matthis Lebel touches down to give the French side the lead.#HeinekenChampionsCup pic.twitter.com/LzHn1dr54L

Can we take a moment to appreciate the hands from Josh Wycherley in the build-up to Keith Earls' try?

That momentum continued over to the second-half, and Munster began the next forty as they did the first with Haley going over in the 43rd minute after a fantastic linebreak from Christ Farrell. A Joey Carbery penalty then put his side 24-14 in front, and the feeling around the ground was that a semi-final was within their grasp.

What a brilliant @Munsterrugby try!

It started with a ridiculous take from Simon Zebo, then Chris Farrell makes the break and finds Mike Haley 🔥

Despite heroic defending Munster and huge turnovers from the likes of Josh Wycherley and Peter O’Mahony, they failed to stop a first-phase move from Toulouse as they went asleep at the back of a Toulouse lineout which allowed Lebel to go straight through before he put Simon Zebo on his backside with a perfect side step and went in for a try.

Further manic defence meant that Toulouse had to settle for just three points as their next addition to the scoreboard, and it was substitute Ben Healy who had the opportunity in the last play to kick Munster to a win. His long range penalty however went wide, and extra-time was called.

Ben Healy with a monster attempt from his own half with the clock in the red that falls just wide!

Extra-time was a tight affair, but neither side were able to turn the screw despite visits into each other's 22s. Thomas Ramos missed a drop-goal effort for his side before Ben Healy once again had the opportunity to win it for Munster with the last-play of the game. And once again his effort was agonisingly close to going over.

A penalty shootout ensued to decide the outcome. Both sides nominated three kickers who would battle it out from different areas of the pitch in a best out of six competition. For Munster it was Joey Carbery, Ben Healy, and Conor Murray. For Toulouse it was Antoine Dupont, Thomas Ramos and Romain Ntamack.

It is a cruel and arguably unjust way to decide a rugby match, and brought back memories of the last such instance when Leicester defeated Cardiff Blues in the 2009 Heineken Cup semi-final.

Whichever side could hold their nerve would be the victor, and in this case it was Toulouse who held firm in front of a sea of red. The french champions kicked their first four penalties while Ben Healy and Conor Murray missed one each, leaving Healy with a kick to keep Munster in the tie. He missed to hand Toulouse a 4-2 win in the shoot-out and a place in the semi-finals against the winner of Leicester vs Leinster.

It almost never happens in rugby...

Munster and Toulouse locked at 24-24 after 80 minutes plus extra time, it all came down to a 𝗽𝗹𝗮𝗰𝗲 𝗸𝗶𝗰𝗸𝗶𝗻𝗴 𝗰𝗼𝗺𝗽𝗲𝘁𝗶𝘁𝗶𝗼𝗻!

It was an epic game, and one which will go down in the pantheon of great Heineken Cup matches.

Given this and the effort and skill put in by both sides, it seemed cruel not to replay the fixture. It is an extremely rare thing to see a penalty shootout in a rugby match, and on RTE radio both Donal Lenihan and Michael Corcoran alluded to this and were critical of the outcome.

"This penalty shootout , it is awful, I don't like it," said Lenihan, to which Corcoran replied, "a dreadful way to lose a game." 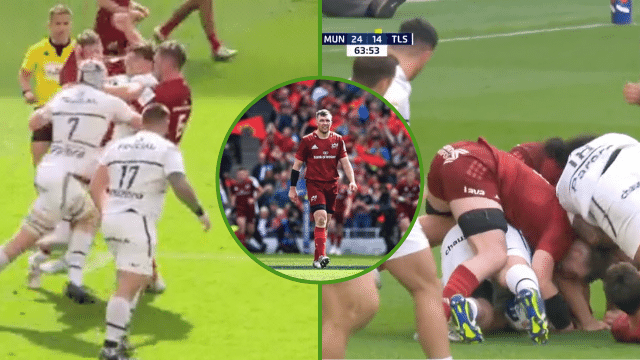