The Last Munster Team To Win A European Semi Final: Where Are They Now?

Ten years ago, Munster reached their fourth, and to date, their final, Heineken Cup final with a nail-biting victory over Saracens at the Ricoh Arena.

Ahead of yet another semi final for the men in red this weekend, we cast our minds back to that fateful afternoon in Coventry in 2008, as Munster squeezed past their English opponents en route to their second European Cup title in three seasons.

Here's what the old Munster cast are up to these days... 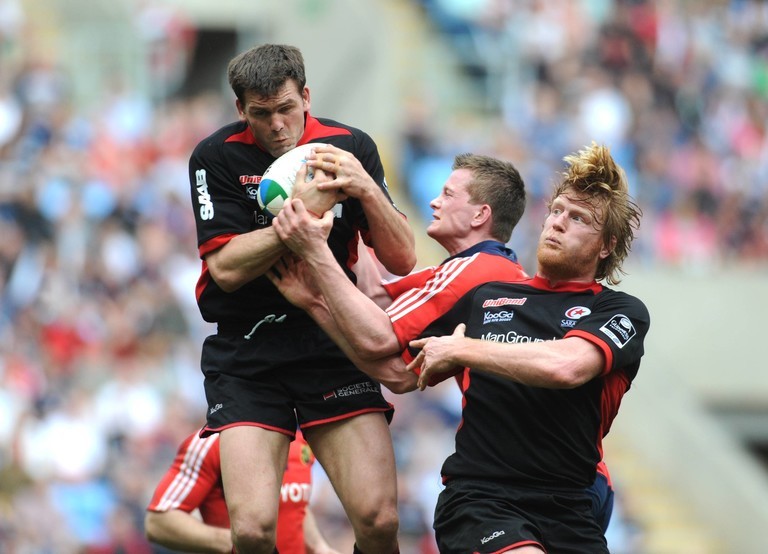 Hurley, whose father Gerry was on the bench versus the All Blacks in '78, almost repeated the feat 30 years later but for a late Joe Rokococo try.

With just seven senior caps to his name, the then-23-year-old started the 2007/08 Heineken Cup quarter-final clash with Gloucester at Kingsholm and kept his place through to the final against Toulouse. Eight more years as a pro saw him earn an Ireland cap in 2009 and a nomination for IRUPA's (now Rugby Players Ireland) Unsung Hero award in 2015.

Since his retirement in 2016, Hurley has done punditry for both Newstalk and RTÉ, and, after a stint as assistant coach at Cork's Dolphin RFC, he emigrated to Dubai, he is working as Academy Manager for the Dubai Exiles Rugby Club. 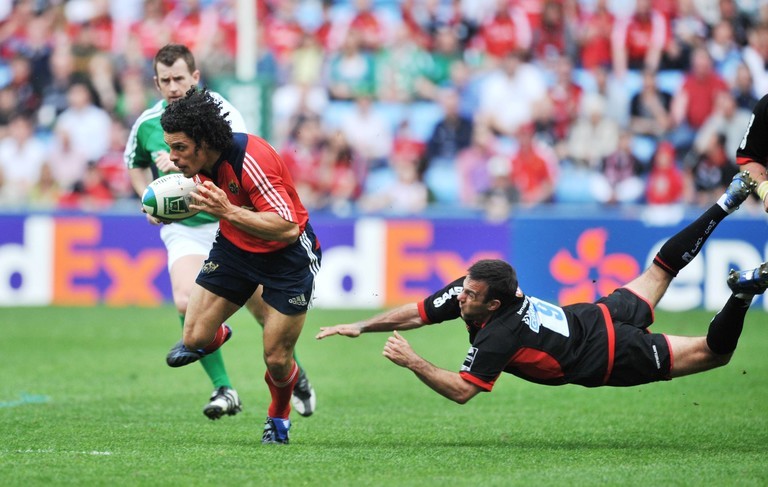 After capturing the hearts of his adopted province during the course of his five-year Munster stint - and picking up one Heineken Cup and two Celtic League medals to boot - Howlett returned to Munster in November 2013, six months after his retirement, and never left. He studied Enterprise in CIT while fulfilling his role as Corporate Ambassador at Munster before picking up a Masters in Business Administration at UCC.

Back in 2016, he became Commercial and Marketing Manager at Munster Rugby. Howlett is also the founding partner of a bio-diesel company in Argentina. 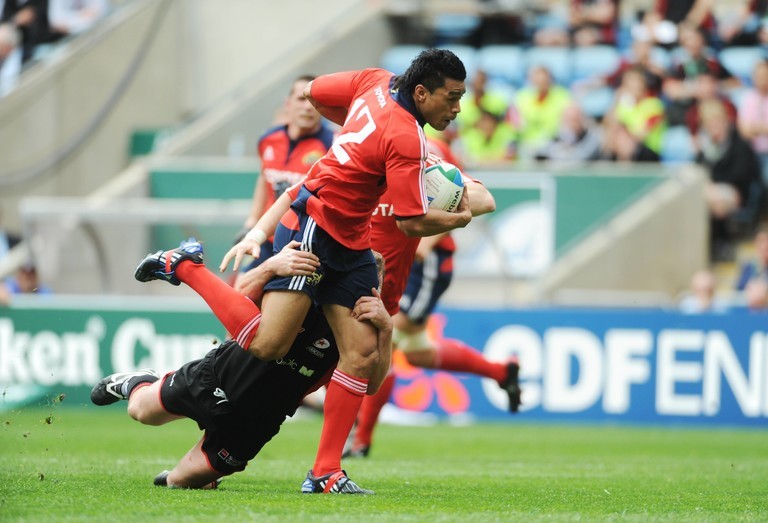 Mafi has spent six seasons at Perpignan since his departure in 2012. The 35-year-old 'Larry' has been a near ever-present since his arrival.

Perpignan, however, have been campaigning in France's Pro D2 for the past four years. They're currently in the semi finals of the promotion playoffs where they are due to take on Montauban. 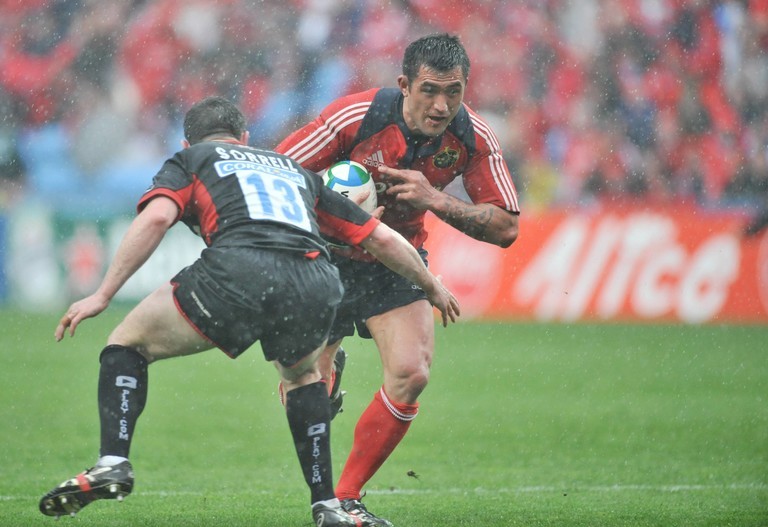 Having announced his Munster departure due to injury 11 months after winning the 2008 Heineken Cup, Tipoki returned to his native New Zealand and almost immediately signed up with the Nga Reo Tautoko (Voices of Support) programme, which is aimed at providing male role models for boys aged 14-16. Tipoki, whose family home was peppered with shotgun bullets when he was just five years old, stated his intention to keep Kiwi kids out of gangs.

Away from his social work, he made his rugby comeback in 2011 when he signed with for the Ruatoria-based East Coast team, captaining them to a Meads Cup the following year.

Tipoki made life-long friends in Munster; none more so than Ronan O'Gara, who went on to name one of his sons 'Rua', supposedly in honour of his old Maori mate. Tipoki returned to Thomond Park for the first time in seven years when Munster hosted the Maori All Blacks back in November 2016.

He currently works as a mortgage and insurance advisor. 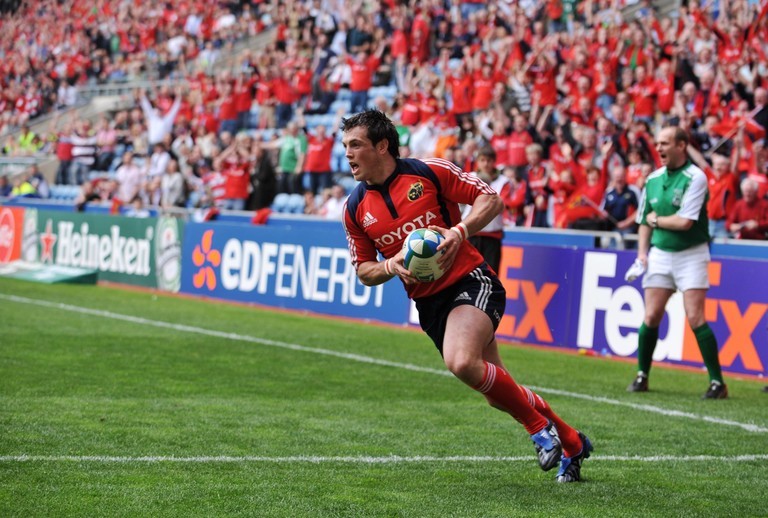 One of Munster's great cult heroes of the mid-to-late noughties, Dowling was forced to retire with a hip injury in 2011. He had studied Sports Science in UL six years prior, and was set to go on to do physiotherapy in Trinity before being awarded a development contract at Munster.

He currently runs Ian Dowling Physio in Raheen, Limerick city, and in late 2015 became physio for the Tipperary footballers - all of this despite being a devout Kilkenny man. He remains in that backroom role to this day. 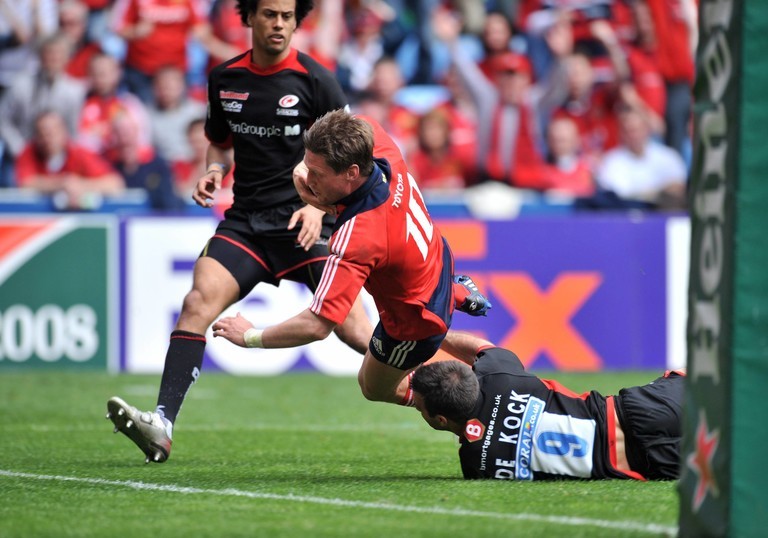 Radge drew the curtain on his record-breaking career in May 2013, announcing his retirement in his inaugural Irish Examiner column. Two months later, he joined Racing 92 as assistant coach.

After a hugely successful spell at Racing, where he initially coached his former rival Johnny Sexton, not to mention Dan Carter, he recently made the surprise move to New Zealand where he has become the Crusaders' assistant coach.

O'Gara has also made a name for himself as one of the best pundits in Irish rugby, and is seen as a future Irish coach, having even been a part of Joe Schmidt's backroom team during last summer's tour of USA and Japan.

SEE ALSO:The day ROG broke the hearts of the men who hired him in France; was this the moment Racing's coaches realised they needed to hire Ronan O'Gara? 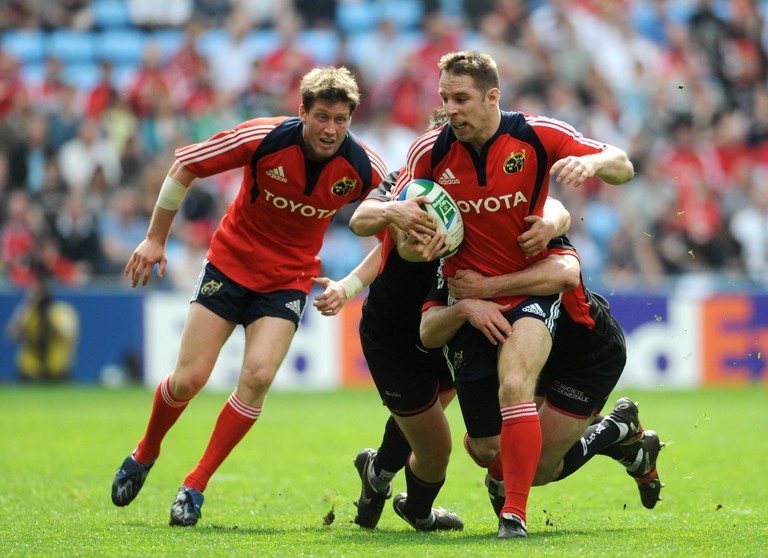 With two Heineken Cups to his name, the former Cork Minor hurler departed for London Irish in 2012 after an injury-plagued few seasons at his home province. Sadly, O'Leary was forced to undergo back surgery shortly after his arrival at the Madejski, which set his Premiership career back considerably.

He returned in 2015, making 18 appearances before joining Montpellier as a medical joker replacement for the injured Benoît Paillaugue. In January it was announced that O'Leary would remain at the Top14 club as opposed to return to Munster from what was initially a loan spell.

Following his time in France, O'Leary retired, and has returned home to Cork, where he is back playing a bit of football and hurling with his old club Erin's Own. The Grand Slam winner also appeared on this year's Dancing with the Stars. 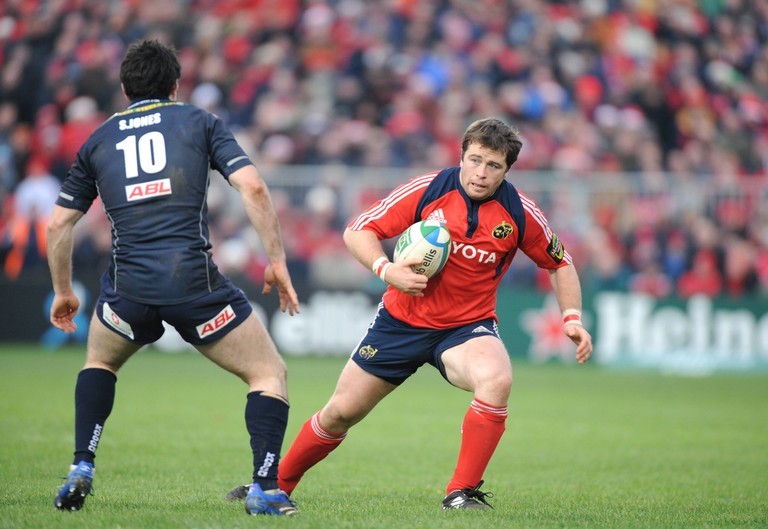 After retiring in 2013, Horan made a quick transition to underage coaching both at Shannon and Munster.

He has enjoyed three spells in his current role as Munster Rugby's Player Development Manager, combining this - and his recent Senior Head Coach gig at Shannon - with his popular punditry work for TG4, RTÉ and radio stations throughout the province. In his Rugby Players Ireland role as Player Development Manager, Horan provides career assistance to Munster players past, present and future.

He also owns and manages a number of properties in Limerick. 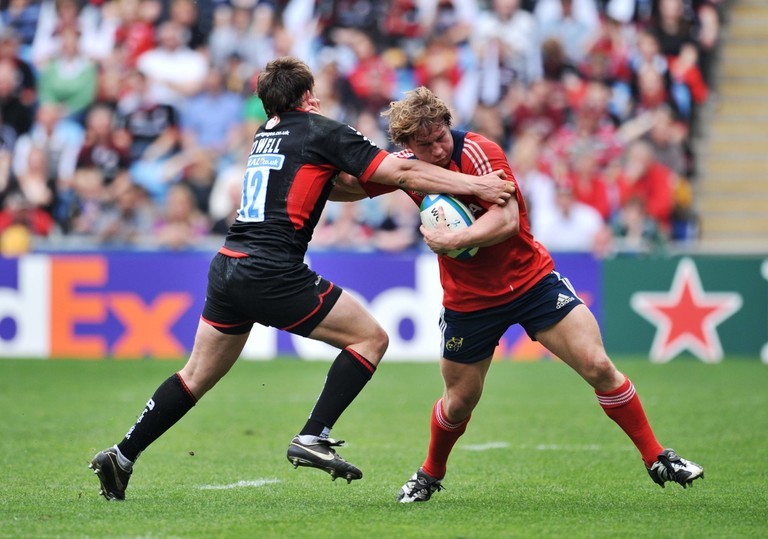 Following his rather heartbreaking retirement in 2012, Flannery completed a Masters in Sports Performance at UL. A year later and he was off to Arsenal, where he performed the role of strength and conditioning coach with the club's academy.

An iconic figure and missed back home, he returned to Munster as scrum coach under his dear friend Anthony Foley in 2014, and remains in that role to this day. He also owns a thriving pub in his native Limerick. 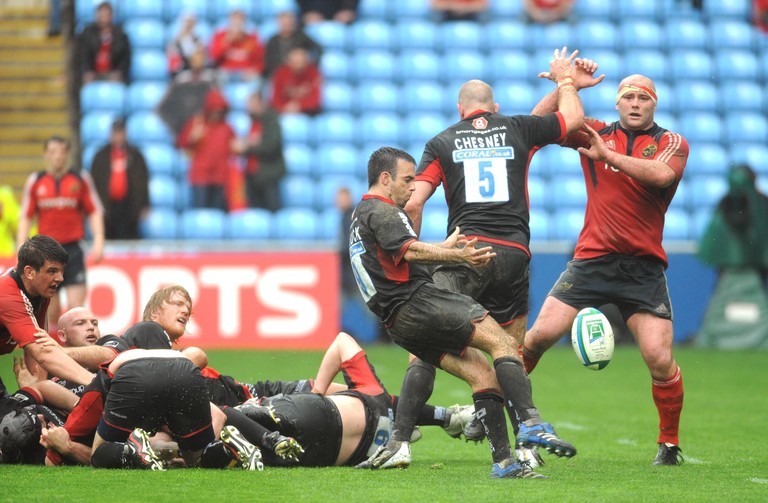 Still farming away and minding his own business, the legend. 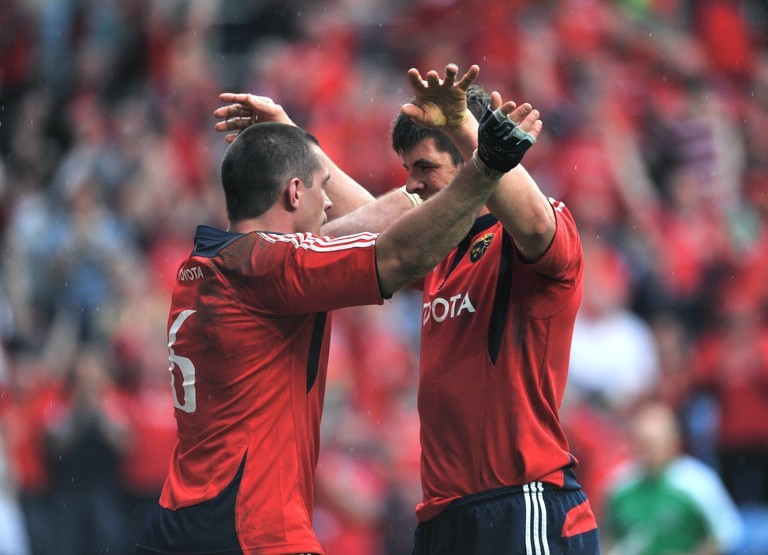 As he hits 40, Donncha has finally decided to call it a day at the end of this season, after a brilliant second act in England with  the Worcester Warriors, where his leadership and performances quickly established him as a club legend at his second consecutive side.

O'Callaghan won't be short of work when he calls it a day this summer. Between co-hosting TV3's The Clubhouse during the Six Nations and doing punditry work for Sky, Donncha's likability makes him a perfect candidate for TV gigs.

He also remains a long time ambassador for Unicef Ireland and is a founder of 4Impacts in Cork, 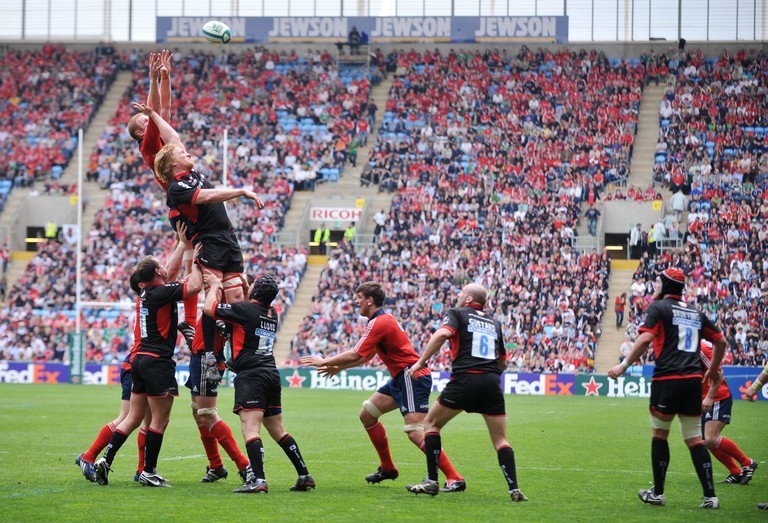 Naturally still a legendary Thomond Park figure, O'Connell rejoined the province in 2016 in a part-time advisory role with the Munster Rugby Academy.

In December, he was announced as part of the coaching team for the Irish U20s.

He's also gone straight in as one of the BBC's main Six Nations pundits and commentators, where he's not afraid to tell the English they're talking nonsense. 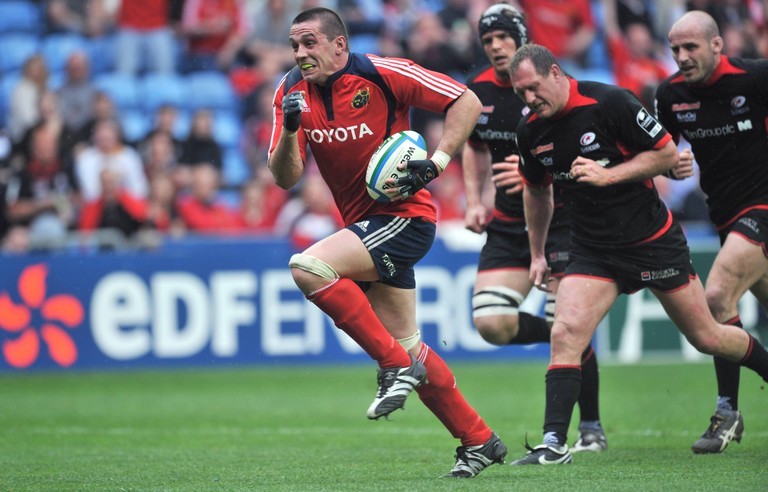 Since his retirement at the end of the 2010/2011 season, Quinlan has enjoyed a highly successful career in punditry.

Now a mainstay on Sky Sports, Quinlan also writes a weekly column with the Irish Independent and presents the sports coverage on Newstalk Breakfast.

He's also a brand ambassador for the Ulster Bank League, and embarks on a media tour of the country with the RBS Six Nations trophy every winter. 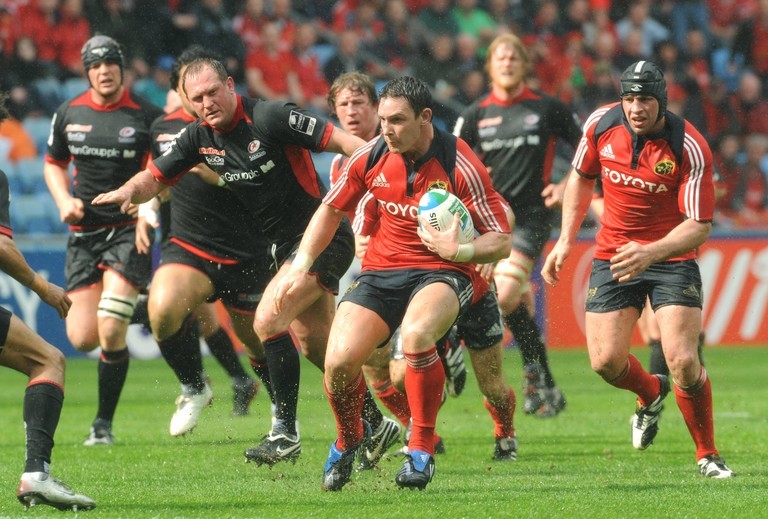 Having done rugby analysis and punditry with organisations such as Aviva and STATSports Technologies since his 2012 retirement, Wallace is now Bank of Ireland's Business Development Manager for the Munster region. Wallace's BOI appointment coincided with the bank extending its sponsorship of Munster Rugby until the 2023/24 season.

The back row great is also a shareholder in confectionary store firm Mr Simms Olde Sweet Shoppe, and a board member with Special Olympics Ireland. 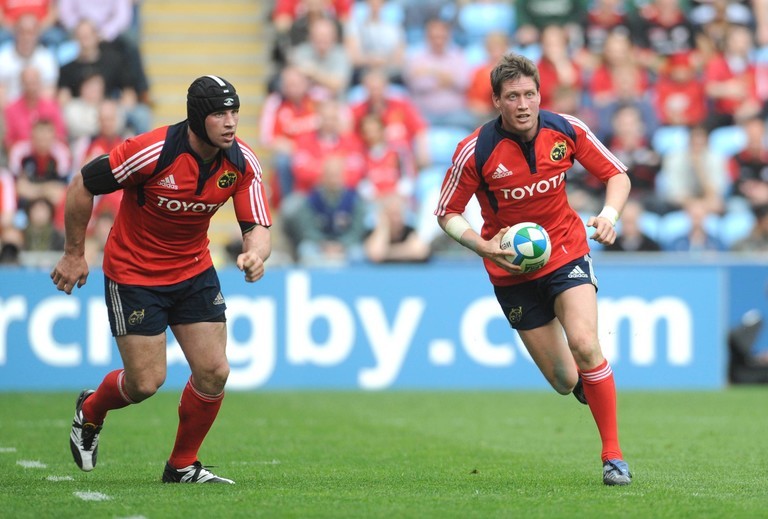 After the Cashel man's premature retirement due to a hip problem in 2012, Leamy returned to his old stomping ground Rockwell College, as assistant and forwards coach. He departed having coached Rockwell to their 26th Munster Schools Senior Cup in 2015, and took the reins as Head Coach at Clonmel RFC.

Leamy's stock as a coach has risen exponentially since. Now 36, Leamy led Clonmel to their third Munster Junior League Division 1 title on the spin in 2017, and this year, having taken over as coach of Cashel RFC, his team were cruelly denied promotion to Division 1B of the Ulster Bank League on points difference and a brilliant late season run.

He was also part of the backroom team as the Tipp hurlers won the All-Ireland in 2016.

Purchased property and founded the Pendulum Summit after his retirement in 2009.

'Freddy' owns the bio-diesel company in Argentina which Doug Howlett invested in.

Went on to coach his former school, Pres, and owns Home Instead Senior Care in north Cork.

The last man from this game to leave Munster, Ryan headed off to Racing last summer and will take on Munster for an incredible third time in the competition this year on Sunday.

Has enjoyed an Indian summer in the English Premiership, and reunited with Donncha O'Callaghan at the Warriors this year, but at 40, has decided to finally call it a day.

Retired aged 33 after suffering a concussion while playing for Worcester. Completed a Masters in Sports Coaching and is now Head Coach of Brisbane Grammar School in his native Australia.

SEE ALSO: Ranking The Top 10 New Zealanders To Ever Play For Munster

Rugby
10 hours ago
By Gary Connaughton
Watch: O'Driscoll And Dallaglio Speak Nothing But Sense On Saracens Mess
2

Rugby
1 day ago
By Gary Connaughton
Stunning Will Addison Offload The Highlight As Ulster Secure Quarter Final Spot
Rugby
1 day ago
By Aonghus Ó Maicín
Where To Watch Ulster Vs Bath? TV Details For Champions Cup Clash
Previous Next