Where To Watch Munster Vs Ospreys? TV Details For The Pro12 Semi-Final 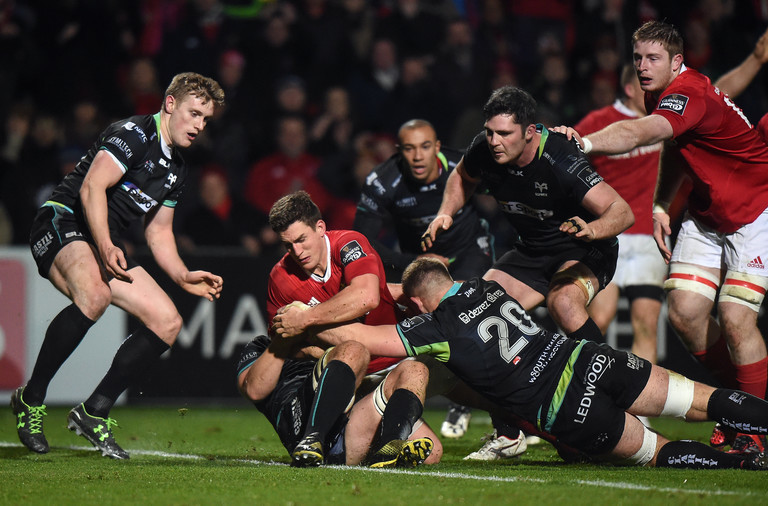 Munster play Ospreys this Saturday evening in the second semi-final of the Pro12 at Thomond Park. The winners will play the victors in Leinster and Scarlets' semi-final which will be played on Friday evening at the RDS.

Where to watch Munster vs Ospreys?

The game can be watched live on TG4 and on Sky Sports 1.

Coverage of the game starts at 6pm on both TG4 and Sky Sports 1.

What time is kick-off for Munster vs Ospreys?

What is the Munster team to play Ospreys?

Rassie Erasmus has made 12 changes from the Munster team which beat Connacht last weekend. Donnacha Ryan and Francis Saili start what will be their final game at Thomond Park.

Jaco Taute and Ian Keatley, both of whom signed new two-year contracts with the province during the week, are on the bench.

Rugby
1 week ago
By Gary Connaughton
Watch: Craig Casey & Gavin Coombes Put On An Absolute Show In Zebre Win
Rugby
1 week ago
By Donny Mahoney
Rainbow Cup Heads For Farcical Resolution As Munster's Final Hopes Dashed
Rugby
2 weeks ago
By PJ Browne
Darren Sweetnam Steps Off Bench To Score Twice For La Rochelle
Popular on Balls
GAA
24 minutes ago
By Donny Mahoney
Bernard Flynn Resigns As Meath U20s Manager Over Row Over Player Selection
Football
3 hours ago
By Donny Mahoney
How The English Tabloids Reacted To The Dispiriting Scotland Draw
GAA
6 hours ago
By Maurice Brosnan
Why It Is Wrong To Say The Art Of Defending Is Dead In Gaelic Football
Football
14 hours ago
By Emmet Bradshaw
Brady And Duff Dismiss 'Awful' England's Euros Hopes