Despite its poignant nature, there should be a vintage feel to Munster's European Champions Cup visit to Racing 92 in Paris on Saturday.

At Racing's invitation, both sets of fans are set to form a guard of honour for the two sides as they approach the Yves-du-Manoir - an ode to the late Anthony Foley, during whose playing career such gestures were commonplace; you'll have heard the stories about Cardiff in 2006.

Through Foley's tragic passing in Paris three months ago, Munster have reignited that once undefinable connection between club and fans. The official line from the club is that they don't expect many fans to travel to tomorrow's rescheduled fixture with Racing; the reality is that, regardless of expectation, there'll likely be more Munster fans in the stadium than their French counterparts. Like the good ol' days, then.

But it's worth remembering a time when Munster's visits to France were met not with expectation but trepidation; take, par example, their 60-9 demolition at the hands of Toulouse in 1996. 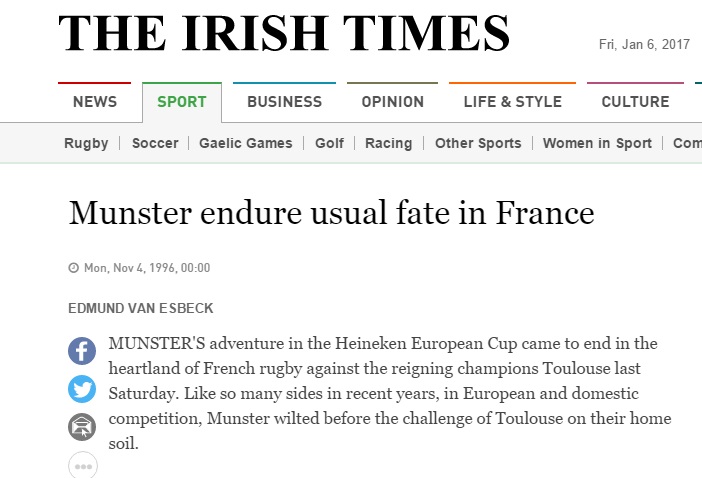 Indeed, it took the red men five Heineken Cup seasons to register their first ever win on French soil. From there, of course, they became one of the most feared visitors to French shores since World War II, developing a propensity for against-the-odds victories versus altogether more stylish and expensively-assembled sides.

Here are five of Munster's greatest wins on French soil. 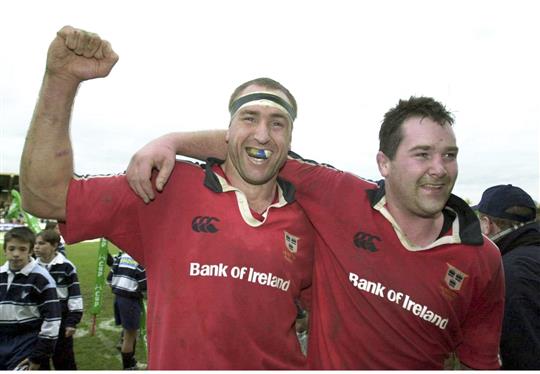 An understated and underrated victory considering its watershed nature. Munster got the monkey off their back with a stunning triumph over the 1998 European Challenge Cup champions, and Ulster's 1999 Heineken Cup final victims, at the Stade Selery.

Four tries, including two for Jason 'Dutchy' Holland and a score each for Marcus Horan and Keith Wood, saw off the French outfit who trailed just 12-14 at half-time.

Colomiers went on to reach their first French top division final the same season, losing 28-23 to Stade Francais. In the new millennium, Colomiers' fortunes took a directly opposing trajectory to that of Munster; in 2005, a year before Munster conquered Europe, the club from the Toulousain suburbs found themselves operating in the French third flight. They currently lie 6th in France's Pro Division 2.

Munster's Ronan O'Gara-inspired victory by the narrowest of margins at Thomond a week previous had sparked a curious reaction from Perpignan flanker Yoann Vivalda. That Limerick fixture, in which his side outscored Munster by three tries to zilch, had amounted to no more than an 'academy training match' such was Perpignan's supposedly lax approach to an Irish away day.

Considering the nature of their slim victory, however, the odds were naturally stacked against Munster for the return fixture in the south of France. Reigning Top 14 champions Perpignan had after all won 16 home European fixtures on the bounce, and had largely outplayed their Irish adversaries just a week previous.

As you might imagine, however, the Munstermen didn't take too kindly to being called out. They taught young Vivalda and his teammates one of the harshest lessons of their respective careers that warm evening at Stade Aimé Giral. Tries from Denises Fogarty and Hurley, Jean de Villiers from the bench and a last-minute crossing from Doug Howlett sealed what Mick Galwey maintains is Munster's greatest ever road victory, and top spot in their pool.

Not bad for an academy side.

3: Taking the biggest city in Europe 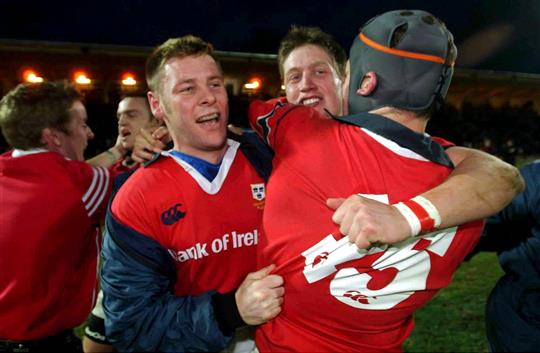 Despite the daunting task of a knockout fixture in Paris against the aristocrats that were Stade, 2002's Heineken Cup quarter-final amounted to a home game for Munster.

A ferocious wind interspersed with rain, healthily red terraces and various renditions of The Fields of Athenry seemed to unease the home side. The gust was at Munster's back for the opening half, and they used it wisely. A cut-back try from Anthony Horgan - who flew under the posts - and 11 points from the boot of Ronan O'Gara saw Munster lead their sky-blue opponents
16-3 at the turnaround. The Parisiens, to their credit, fought back with gusto in the second stanza. With the score poised at 16-14 to the travelling Irish province at the death, a remarkable rearguard action from Munster repulsed the home side.

Munster had banished the demons of the previous season, when the same opposition had seen them off by an eerily similar scoreline of 16-15.

With a mischievous glint in his eye, Mick Galwey told Robert Kitson of The Guardian, "A small Irish province has beaten the biggest city in Europe!"

Before being hoisted upon the shoulders of two invading Munster fans, Galwey concluded, "Two thousand fans made the financial effort to come and cheer us on, and this victory is our way of paying them back." 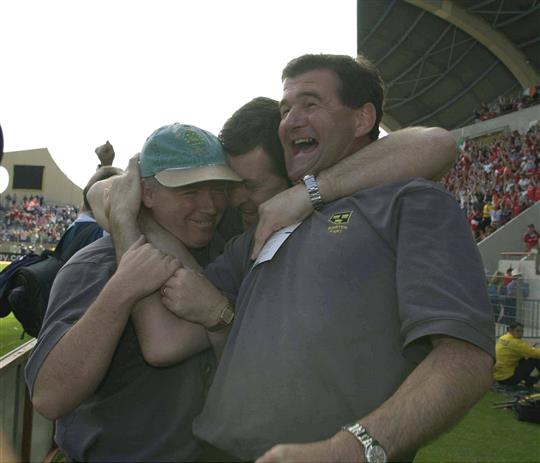 Munster's reward for a monumental effort in Paris was a trip to face Castres, whom they had met twice in the pool stages that same season. Munster had beaten the perennial French challengers at Thomond by a single score, before Castres returned the favour on a scoreline of 21-13 in January of 2002.

A date with destiny awaited Munster in Cardiff, but many predicted their dreams would be washed into the Mediterranean on a warm, breezy day in Béziers. Indeed, it was so warm, Paul O'Connell had to be plastered in Factor 32 sun cream prior to kick-off.

After the heartbreak of Twickenham two years previous, Ronan O'Gara caught all questions as to his bottle and sent them sailing into oblivion; having recently turned 25, the legendary out-half kicked six penalties while requiring 13 stitches in his knee. "How he managed to kick all those penalties is beyond me," Declan Kidney would say post-match, echoing the sentiments of referee Chris White to revealed O'Gara was howling in pain as he barrelled into contact in the dying seconds.

And it was in those closing moments when Munster closed the show. John Kelly crashed over the Castres whitewash with his side leading by the narrowest of margins. His try and O'Gara's afters extended the gap to eight, which meant curtains for Castres, and another extraordinary road win for Munster, in front of what many maintain to this day was a Munster-majority crowd. 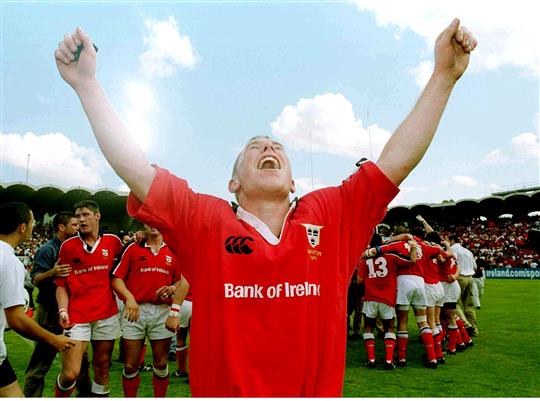 Inaugural Heineken Cup winners and 1999/2000 tournament favourites Toulouse welcomed Munster to the home of Bordeaux football on a sweltering day in May.

Table-topping Toulouse entered the contest on the back of nine consecutive victories, but his was the day Munster embedded themselves within European club rugby consciousness as an occasionally irresistible force. Declan Kidney's men ditched the up-the-jumper, forward-oriented game for which they were renowned, running in three tries to Toulouse's one on the rock-hard ground at Stade Lescure.

The creme de la creme of French club rugby, born of the only major city in France where rugby supersedes its round-ball adversary, were out-Frenched by 15 extremely red men who were supposed to wilt beneath the Bordeaux sun. Eight of them had lined out for the Brian O'Driscoll-inspired Ireland team who had toppled France at Stade de France just months previous, but Munster had been written off by a French media who viewed the fixture as Toulouse's procession to the final.

Tries from Jason Holland, John Hayes and a biblical, pitch-sweeping score finished off by Ronan O'Gara culminated in Munster's first true two-fingered salute to their detractors, and a tour de force-type performance on one of the most hostile Irish club rugby trips to France in living memory.

Bonus titbit: As per The Irish Independent, the late actor Richard Harris ecstatically phoned Mick Galwey in the Munster dressing-room following the victory, only to be greeted with the response, "Who the fuck is Richard?"

We leave you with one more look at that O'Gara try, which remains one of the finest in European club rugby history.