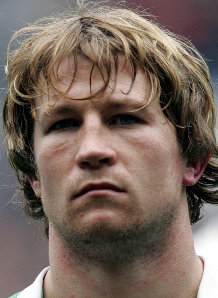 Eulogies are being written for Munster this morning, after Leinster beat them for the fourth time in a row at the RDS last night. But what role did a criminally-overrated comedy troupe of Scousers posing as Mayomen, aka the Hardy Bucks, and an unknown online's men magazine called Joe.ie, have in Munster's ultimate demise?

The facts are murky, but here's what we know.

On Monday, Joe.ie posted its second exclusive Hardy Bucks video. (The first was an overlong
video filmed at the Joe.ie launch, featuring cameos from Irish luminaries like Gerald Kean, the guy on after Ray D'Arcy and very briefly Jerry Flannery.)

Filmed at Munster's training ground at UL, 'The Munster Mash Part 1' featured speaking roles from Munster stars Jerry Flannery, David Wallace and Tony Buckley and promised a second skit that seemed to be shot mostly around the Munster weightroom.

It was a typically middling stab at comedy from the Bucks, though it was completely unoffensive, unless you're from Mayo. Jerry Flannery got in a mis-timed joke about how you don't kick a fellow player in rugby. Que sera.

Then out of the blue, in the middle of the week, the video disappeared from Joe.ie, victim of a mysterious Error 404. Adding to the intrigue was the strange-looking Munster side that Tony McGahan named for Saturday's Magner's League semifinal on Wednesday. Flannery, Wallace and, less surprisingly, Buckley were all starting on the bench. Pundits reckoned that McGahan was looking to use Flannery and Wallace as impact subs, or that Munster simply didn't rate the Magners League, but off-the-record speculation was more pointed. Perplexed posters on Munsterfans.com wondered if the Joe.ie video might have had something to do with it all.

Of course, the Flannery-Joe.ie-Hardy Bucks connection isn't as random as meets the eye. Flannery is employed as a director at Impact Media, which markets and designs Joe.ie (both of which are run by Niall McGarry) which recently signed up the Hardy Bucks to film the occasional comedy skit.

What wrong, if any, did Flannery et al commit? Did Flannery somehow impugn the name of Munster by allowing comedy skits to be filmed in and around their training area? Why did Joe.ie decide to spike their own video? The whole story remains untold.

Munster are denying that the video had anything to do with Flannery's benching. Either way, Flannery spent all of the Leinster match on the sidelines and Munster finished this season looking old and toothless. As Irish Examiner sports editor Tony Leen tweeted last night:

Maybe off the pitch interests are becoming more important for some Munster players.