The man they call 'Big Papa'.

Abraham Papali'i might not be a household name in this country but he's becoming a well-known entity in Galway.

The Connacht back row is enjoying his second season on the west coast. He first arrived in Ireland at the end of the first lockdown in 2020. Connacht's

Speaking to Stephen Murphy and Jonathan West on the Master Of None Podcast - 'Big Papa' spoke about adjusting to life far away from home.

A chat with Abraham Papali'i. We cover:

Plus much more. Can't recommend listening to this enough purely for how great Abraham is.#BigPapa #Connacht

— Master Of None Podcast (@MasterOfNonePod) December 2, 2021

"I had no clue about Connacht," Papali'i said. "The only team I think I heard of before I came here was Munster. I had a mate that played with Munster and he was Samoan as well."

While New Zealand is far from a tropical haven, Papali'i said the biggest adjustment for him was the Irish weather. Or in particular - the Galway weather.

Papali'i came from a rugby league background before deciding to make the switch to union. He said he started playing the equivalent of club rugby with Galwegians at home.

The Bay of Plenty Steamers would eventually be Papali'i's gateway into Connacht after bouncing around some teams. He tried to do his research on what life would be like in Ireland.

"I think I done a google search and I was just like, I looked at google maps and things to do in Galway," he said. "After high school, I was with the Cardiff Blues and I was in Wales."

"The picture in my head was thinking, 'Okay it's going to be like castles and old things. Game of Thrones!' So I just pictured the same thing. But olden dated stuff."

Big Paps has a message for the fans!👂

Abraham Papali'i,and the rest of the team are looking forward to having as many fans join us in cheering on the boys this Saturday 23rd at the Aviva!
Tickets are available on the https://t.co/vd0OkKN5Z7
.
#StrengthInNumbers pic.twitter.com/i8RhiSU7ta

One of the big draws for 'Big Papa' initially was Bundee Aki. Having also been born in New Zealand and of Samoan descent, Aki reached out to Papali'i before his move.

"Bundee gave me a call before signing, before coming over when I was in the thinking process. Just wanted to speak to me and have a good chat. He told me if I come then it would be really good for the team and things like that."

"He's been massive for me. Just helping me out and just when I first arrived and things. Getting to know the place and showing me around. It’s easy when you’re the king of Galway!"

Papali'i's received a warm welcome from the locals in his first few weeks and his teammates helped him settle into life in Ireland.

"The boys when I first came to meet the team - man. Just been so welcoming and just Irish people in general as well. Just going around, genuinely nice too."

"They go out of their way to help you and things like that. You just really get a good vibe whoever you talk to in Ireland."

Samoa come out to sing their anthem before the cancelled men’s barbarians match. Emotional. Such a shame for fans and this side. Women’s match still on @BBCOne 2pm pic.twitter.com/lTLi77Yd66

A Weekend That Got Away

While he's had fond memories of life over here so far, there has been some recent disappointment. Papali'i was called up to the Samoan team to face the Barbarians at the weekend.

Due to positive Covid-19 cases in the Baa-Baas camp - the game was postponed. Papali'i never got to mark his first cap for a country he's proud to represent.

"We didn’t know what we were going to expect with the Barbarians going out on the piss all week. They were going to get something."

The frustrations of the weekend were mostly overshadowed by pure emotion shown by the Samoan camp - as seen when the players took to the pitch at Twickenham.

Despite the cancellation - the players sang their national anthem and performed their patented 'Siva Tau' Haka. The scenes went viral.

'Big Papa' had a raw introduction in his first game for Connacht. It was none other than an inter-pro clash with Munster but things didn't all go to plan.

He was shown red after 25 minutes for a high tackle on Conor Murray in August of last year. In November, he served a five-week ban for a dangerous clash against Zebre.

Then in May of this year, Papali'i was given his marching orders yet again for a tackle made in a game against Benneton. He said it's something he's had to address.

Breaking: Connacht No 8 Abraham Papali’i has been handed a four-week ban following his red card against Benetton last week.

"As I changed from rugby league to union, even at my local men's comp, I didn’t change my tackle tech, " he said. "No one told me to change it. I never had problems with it."

"(The game's) going in the right direction in terms of protecting players and I understand that I need to do a lot of work, now that I’ve got three red cards already."

What's he doing to address it? He said he's been "wrecking" a training item called the 'sausage bag' which is like the big tackle bags but a bit smaller.

"When I get in trouble is when I get a bit too emotional and I get a bit angry. I should just save that for when I’m running the ball instead of on defense. I’ve had too many offences now."

At the time of writing - we're hours removed from a huge test for Connacht. They make the trip to the RDS to take on Pro 14 champions Leinster.

'Big Papa' spoke about how the coaching staff have implemented changes this season - which has been evident on the pitch and in some recent results.

"For me, I know what I need to do. Just to kind of be able to be mobile enough to get around the park and play just the style of rugby which has changed now."

"Like last season to our game plan now - it’s a lot different. I need to be able to move a lot more than I had to last season."

Hey Siri, what does Big Papa bring to Connacht?

"Pete Wilkins is our attack coach now and he brought a whole new game plan and Mossy (Lawler). Just a different style. Last season we were playing shape. This season he threw out the shape and just let us play whatever’s in front."

"We don’t have many big bodies, so I think the game plan works well because Connacht is a very fit theme. We have a big back row and then we have a fit back row."

Papali'i is hoping to make more of a mark this season and if the fans had any say - they'd put pen to paper on another year for him out west.

The New Zealand born player is becoming more acclimated to life over here and even a recent meeting with past players has helped him understand the culture.

"We had a players social and they got a few of the old heads to come in and speak to us about their experiences with Connacht before us or back in the day."

"Just how you know how everyone kind of sees Connacht as that team. They look down on Connacht ... the lads wanted to show up and prove everyone wrong."

"That was the kind of mentality and message we took and just the theme. It was really helpful because it just shows if you know who you’re representing when you put on that jersey."

"You go out with a battling mentality, you’re ready to go to war. Whoever we’re playing against. We wanna do our best."

You can listen to the full chat with Abraham Papali'i over on the Master Of None Podcast here. 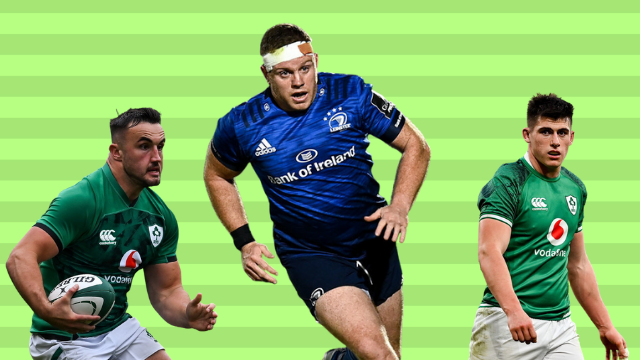