Forfeits seem to be a growing trend in society. There are embarrasing penalties for poor performances in FIFA, or even fantasy football efforts - but it's something that has been embraced by rugby tours for years. It's a bonding experience, and allows the players to keep themselves in check, and hand out sanctions when players get caught doing something.

Even Paul O'Connell. The Limerick man's legendary status doesn't absolve him from forfeits, and when he was caught doing something during the World Cup in 2011. What exactly he did is unclear, but O'Connell decided to waive his punishment in favour for rolling the dice.

The dice, which can let him off or punish him with something much worse rolled against O'Connell.

Six- Dip into a selection of forfeits.

The one he pulled obliged him to paint a cat’s nose and whiskers on his face and leave it there for 24 hours. So, he did.

Did it negate his presence amongst the team? Not so, says O'Callaghan:

Paulie spoke for 20 minutes, and for as long as he spoke I never noticed the cat’s whiskers and nose on his face. He was sitting there looking like something from a pantomime with a tough audience in the palm of his hand, setting the tone for one of the biggest matches of our careers. Only O’Connell could have pulled it off.

There aren't many things in the world that O'Connell couldn't pull off. 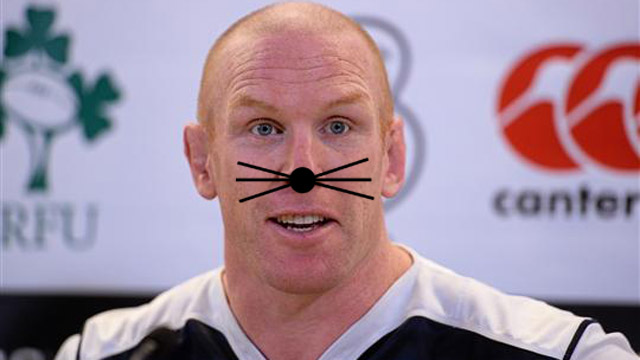 See Also: Paul O'Connell Is The Star Of The Amazing New Sport Of Rugby Golf

Rugby
4 weeks ago
By Gary Connaughton
Confirmed: Ireland Will Not Be Top Seeds For 2023 World Cup
2

Rugby
4 weeks ago
By Gary Connaughton
Confirmed: Ireland Will Not Be Top Seeds For 2023 World Cup
Rugby
10 months ago
By Balls Team
'I Just Felt A Wee Bit Let Down That It Looked Like I Threw Him Under The Bus'
Rugby
11 months ago
By Gary Connaughton
English Media Reaction To South African Humbling In Rugby World Cup Final
Popular on Balls
Other Sports
7 hours ago
By Mark Farrelly
Weekend Sport Guide: What Times You Should Eat And Go To The Toilet
2