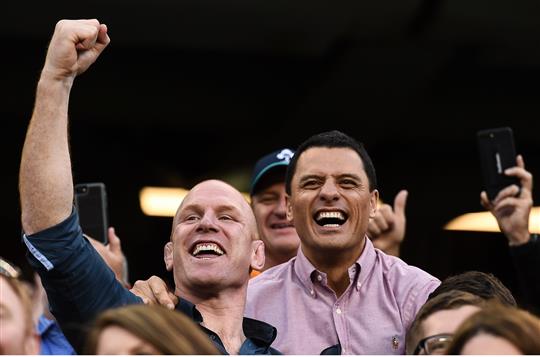 Paul O'Connell celebrated Ireland's victory over the All Blacks like every Irish rugby fan. One of the great images after the final whistle in Chicago earlier this month was of O'Connell, fist in the air, standing next to All Black and Munster legend Doug Howlett in the Soldier Field stand.

Speaking on Second Captains this week, O'Connell said that he does not believe that win against New Zealand will be a one-off, it can be replicated.

I don't think it's a one-off giant-killing moment. I think it's the product of a lot of hard work by the players and the staff and a lot of good planning by the IRFU.

Paul O'Connell on New Zealand going 'over the edge' against Ireland

O'Connell feels that the excessive physicality which the All Blacks brought to their second November encounter with Ireland was a result of pressure. That was pressure exerted by All Blacks management and the New Zealand media.

I think they were under a bit of pressure and they did go over the edge. A lot of teams do it. I suppose in recent years we kind of associated a perfection with New Zealand. It shows that the pressure gets to everyone. They really needed to win. They really wanted to win and in trying to do that they went over the edge.

I've been part of teams that have done it. I've done it myself before. It just goes to show that they're human.

They probably felt that conceding two tries off mauls against Ireland, they were probably dominated a little bit physically and they didn't want that to happen again. In doing that, they overstepped the line a little bit.

Despite admittedly watching the game with a major Ireland bias, O'Connell still saw moments which he felt All Blacks fans could rightly have felt irked about.

When Beauden Barrett nearly didn't dot the ball down or didn't dot it down, I think it's probably a penalty try because Johnny [Sexton] hit him high.

I think Trimble's knock-on - if that had been an All Black and we were going in under the posts, we probably would have reacted differently as well. I think he was trying to catch it but he did knocked it on and prevented a certain try.

O'Connell does not believe that there has been an overreaction from Irish fans and media to the game though - earlier this week New Zealand website Stuff.co.nz declared Ireland 'the new whingers of world rugby'.