'I've Been Beyond Impressed With Him, Particularly His Footballing Skills'

Peter O'Mahony believes that Caelan Doris will be a loss for Ireland as they head into this weekend's opening game of the Six Nations against Wales.

The back row, who was likely to start for Ireland at number eight, returned to Leinster earlier this week suffering with symptoms of concussion.

Ireland's plentiful back row options has made ploughing on without the 22-year-old a relatively easy task.

"You have six or seven back-rowers here that are fighting for three spots. The big thing about it is, you don't like to see one of your men go down.

"Caelan has been one of the outstanding Irish players of the last 18 months, two years. I have to say, I've been beyond impressed with him, particularly his footballing skills: his ability to catch, pass, his ability to move his feet in the line, to carry hard when he needs to, his tackling, his poaching. He has been exceptional, and he certainly will be a big loss. But, like I said, there are guys there who are hungry.

"We demand that when someone goes down, that there's someone there to step in, and it is as seamless as possible. It has to be at international rugby. You can't be waiting for people.

"Everyone in the group was gutted to see him go home. At the same time, there are guys there champing at the bit to get a go - myself included."

Doris's place in the Ireland squad was taken by O'Mahony's exciting young Munster teammate Gavin Coombes while Quinn Roux, ruled out by a neck injury, has been replaced by Leinster second row Ryan Baird.

"It's a good environment to come in and learn really quickly.

"There are guys that are very willing to help anyone when they come in. I trained with Ryan before the World Cup, and he's a man who is incredibly talented and hungry to learn and get stuck in since he arrived again.

"Coombesie has been playing some great rugby. He'll fit in well. There's a lot to learn, to be fair. These guys haven't been around the environment...

"You're expected to be up to speed like you've been in here a long time. But I think it is a testament to the group, the way they have rallied around and got the lads up to speed."

O'Mahony's contract with the IRFU runs out this summer. He confirmed that is in talks about a new deal.

"I've been in discussions with the IRFU now, at the moment," he said.

"That's where it is really, in discussion." 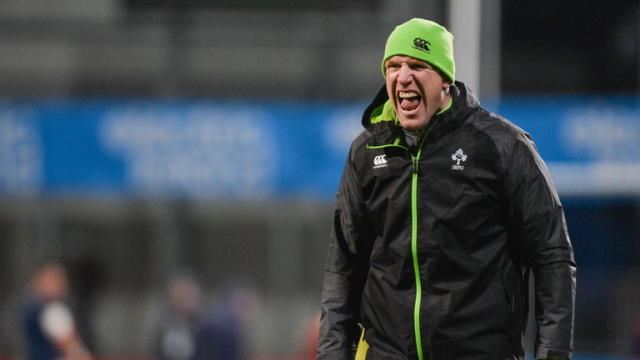 Rugby
3 months ago
By Jonathan Browne
The URC: The Round 3 Standout Performances From The Irish Provinces
Rugby
7 months ago
By Gary Connaughton
Watch: Ryan Baird Scores The Maddest Second Row Try You're Likely To See
Rugby
10 months ago
By PJ Browne
'He Was Always A Player That Stood Out Very Clearly From An Early Age'
Popular on Balls
Hurling
1 week ago
By Balls Team
A Tribute To GAA Players Who Looked Significantly Older Than Their Age
Rugby
2 days ago
By Colman Stanley
The Fascinating Journeys Of The 2012 Ireland's U20 Rugby Team
Football
1 day ago
By Gary Connaughton
Some Pundits Are Revelling In Rafael Benitez's Everton Sacking
32