Steve Hansen's side have never experienced a game like this. They had lost four games in the previous two years but never like this. Ireland had superiority in terms of their skill and their steel. A sustained performance of unprecedented dominance.

The significance of the result will be discussed extensively in the coming weeks particularly given the tremendous tournament coming down the tracks next year, but for now, let us dwell on the performance. Ireland were demented in defence and awesome in attack.

A set-piece that not only matched the All-Blacks but forced them to fold, literally. Midway through the first half, Karl Tu'inukuafe's anguished frame cracked up from his own scrum under Furlong's encumbrance. Shortly after half-time, Steve Hansen looked to Plan B with the score 9-6 and replaced his entire front-row.

Yet it was Ireland who responded first. Jacob Stockdale, with a moment of explosive magic, touched down to give Ireland a ten-point differential. From there it became about enduring rather than enjoying, but Ireland did not relent. 16-9, Ireland have beaten New Zealand in Dublin for the first time ever. 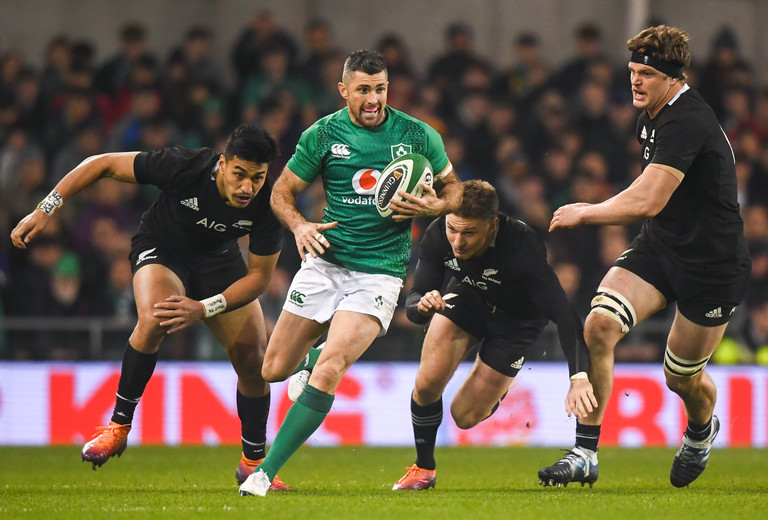 A tad fortunate to avoid the sin-bin for a collision in the second half but he brought the assurance Ireland needed in the air. One clean break and two defenders beaten.

A great catch and some really clever footwork meant he threatened the All Blacks defensive line early as they looked to kick deep. Unsurprisingly, Barrett redirected his aerial bombardment from Earls' wing to Stockdales. Made the most of what was available to him. 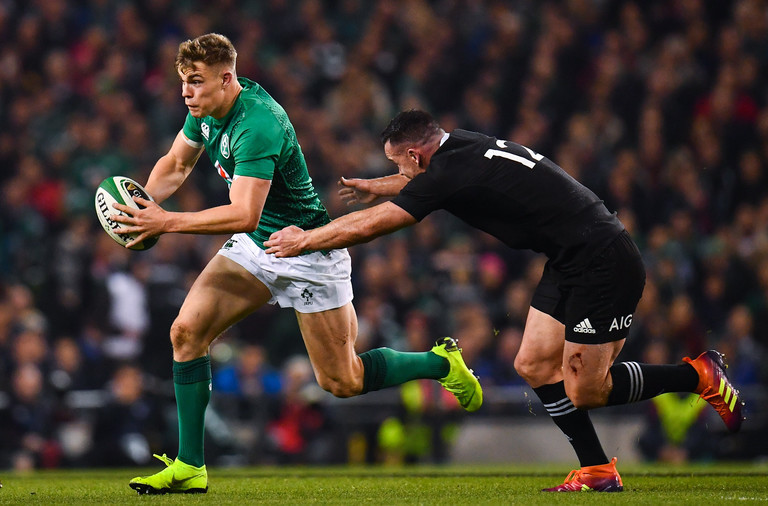 Andy Farrell is determined that Ireland's defensive line will suffocate any opposition and this is why he packs 14 men into it and leaves Rob Kearney with the considerable task of covering the entire backfield. Ringrose is quickly becoming the most vital cog in that machine. A defensive masterclass, 12 tackles with only one missed.

He was also going to be subjected to some personalised treatment and Ryan Crotty set an early marker as he shot out of the line and nailed the Connacht centre off Ireland's first attacking play. A constant willing ballcarrier and struck up a lovely tandem with Sexton that saw the pair run clever decoy lines for the other's carry. 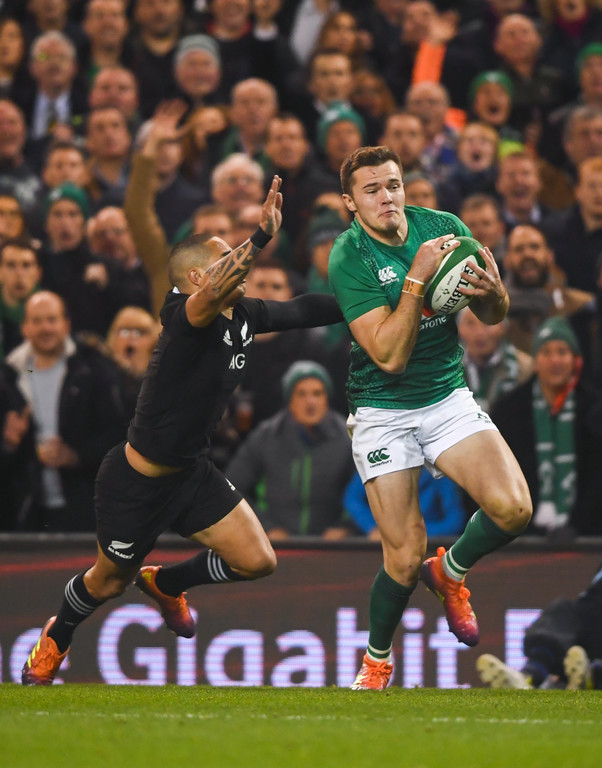 Really struggled under the first two high balls that came his way. Great chase for the second half re-start.  Playing with fire with a chip over Kieran Read which was blocked down but the Crusaders man knocked on. Then he produced the moment of magic Ireland desperately needed. Every team needs an x-factor finisher, Joe Schmidt has it in this Ulster flyer.

This was a performance that reinforces his claim to World Rugby Player of the Year. A game expertly steered by his leadership on both sides of the ball. His place kicking was peerless and he was the first Irish back to hit double-digit tackles. One minor blemish with a penalty conceded after a high tackle but responded with a great covering hit on Ioane. Peerless.

A shaky start as his first box-kick was too long and he contested a high ball that Rob Kearney audibly called. Sold O'Mahony short with a weak pass that was knocked on but recovered brilliantly to find his rhythm. Stood into the line defensively and came up trumps with seven tackles. Kept the New Zealand pillars honest all night long and was well able to mix it with a frequently infringing pack.

Any pre-match fears about a lack of depth at scrum-half have been well and truly put to rest.

Best needed a packed performance after some patchy form. Tried to force an offload and ended up spilling the ball which led to New Zealand's first points. Devin Toner's return shored up the line-out as expected. He conceded the penalty which saw Barrett utilise his free shot and hit a drop goal. A really loose offload out the back cost Ireland ten yards and Ardie Savea soon forced a penalty.

At the start of 2018, Karl Tu'inukuafe was working as a bouncer and looking for a job in rugby. He got a call from the Chiefs as they were injury-stricken, and ended up forcing his way into the All Blacks team and onto the shortlist for newcomer of the year. It says something about the culture in New Zealand that they could unearth a gem like this prop accidentally. Last week, he crushed Lions and English prop Kyle Sinckler in a head-to-head battle.

Tonight his atmospheric rise was grounded by the best tighthead in the world.

Furlong forced a huge penalty under the posts which Sexton converted to make it 6-3. Ireland's 'three to a pod' philosophy requires a ruthlessly efficient clean-out and Furlong had the best clean-out in the Irish squad. 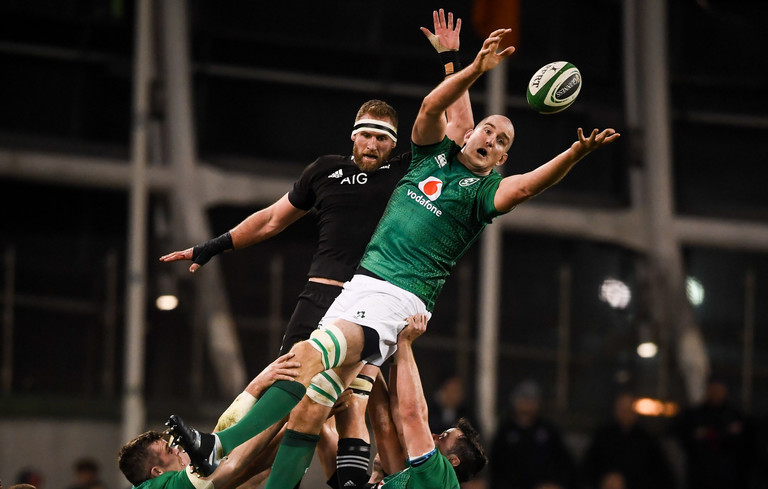 Hit Brodie Retallick with preposterous power to force a huge turnover shortly after Ireland's first penalty. Ireland have two other world-class line-out jumpers but Toner reigns supreme in the air. However, it would be unfair to limit his contribution to the set-piece. Toner uses his timber to considerable efficiency and has a real rugby brain. His ability to use his awkward frame in a defensive ruck to slow ball is an underappreciated trait and his 13 tackle count is striking.

The second most successful tackles of any Irish player with 14. One rare missed tackle aside, Ryan stood tall in the face of two of the best locks in the world and demonstrated he is every bit the match for them.

His inability to accept seemingly lost causes extends to his own bodily function as the Munster man fought on in the face of anguish due to a hip injury. A trojan effort at the breakdown that emphatically bossed his counterparts of Liam Squires and Scott Barrett. His loss to the line-out was obvious the second he left the pitch as Ireland aimed for Jordi Murphy and lost on their own throw. 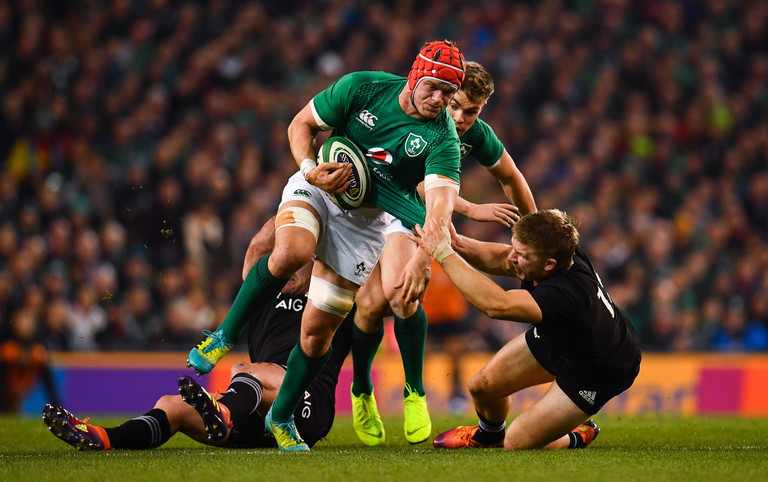 An explosive opening five minutes from the Leinster who set the tempo with a series of massive tackles and an assisted steal with CJ Stander during the All Blacks first visit to the Irish '22. An anstonishing 16 successful tackles without a single missed tackle. Today Irish rugby made history and Josh van der Flier was instrumental to it.

Stander came to play today. The 28-year-old was instrumental in establishing the base level for Ireland with a huge steal during the opening exchanges. Barrett kicked a second-half penalty and as New Zealand went in search of a vital equaliser, it was Stander who stood tall to force a huge turnover. 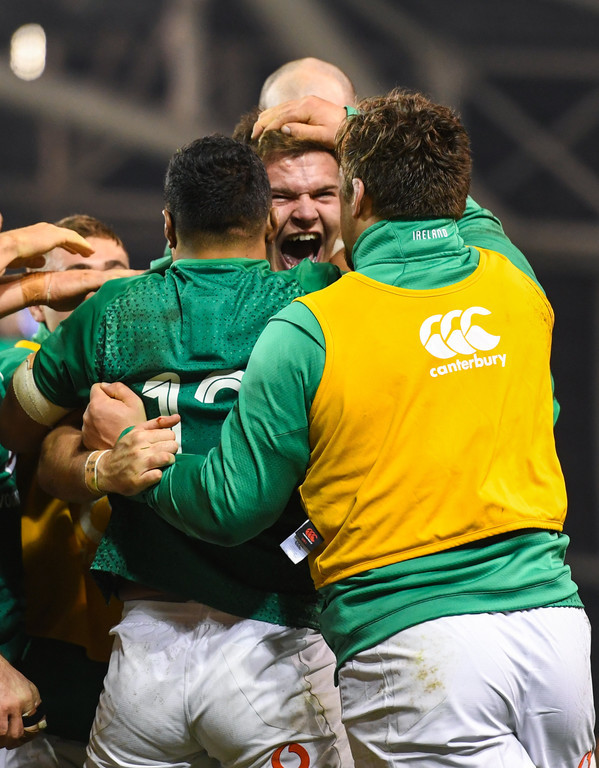 Ireland have a perfect tandem in their loosehead duo. Healy performed, McGrath carried it on and the role continued beat-for-beat perfect.

His darts were all over the place. Line-out really suffered in the later stages of the game.

Man on a mission. Relentless.

Came on after 65 minutes and contributed to a big defensive effort.

The greatest performance of Joe Schmidt's tenure and it is not even close. Commitment, precision, passion, control, the perfect recipe of for world-conquering rugby. This was a triumph of personality and prowess as Irish rugby came off age and announced itself as a true world power.