France beat a valiant Ireland 15-13 in the second round of the Six Nations on Sunday. In what was Ireland's first game without Johnny Sexton or Conor Murray in more than a decade, France claimed victory in Dublin for the first time since 2011.

Positioning play at fullback was good throughout. Solid under the highball. Combined well with James Lowe for a disallowed try in the first half.

A much better performance than last week against Wales by the Munster winger. Solid under the high ball. Won a couple of penalties. Still didn't see the ball out wide as much as he would like.

Replaced by Jordan Larmour in the 68th minute.

One of Ireland's most dangerous and creative players when he's allowed run with the ball. Just doesn't get enough space to show it. Still, he carried nine times for 77m.

Did not have the same influence as last week but it was still a good performance from Henshaw. Carried nine times for 57m and made six tackles.

Caught out badly when he jumped up in the line to tackle Bryce Dulin but failed to do so for France's second try.

So close to scoring a try in the 25th minute when he bulldozed over a French defender but his right boot just barely clipped the touchline.

His booming clearance kicks continue to be a bonus of his play. Perhaps should be taking the kicks close to the right-hand touchline instead of a right-footed kicker.

Looks far more comfortable with ball in hand than he does with the boot. Understandably - given last week's mistake against Wales - he was a little conservative with his kicks to touch. Kicked the ball a lot as Ireland looked to force France into mistakes in wet conditions. First penalty kick skewed awfully wide.

Replaced by Ross Byrne in the 42nd minute for a HIA and remained off.

On the wing for France's first try by Charles Ollivon. Perhaps not used to playing out there, he cut inside making the task much easier for the French. Like Burns, he kicked a lot, with mixed results.

Some good moments in defence late in the first half. Unluckily gave away penalty late in first half for not rolling away. Jalibert scored to make it 10-3.

Made more tackles than any other Irish player with 14 and won a turnover.

Replaced by Ed Byrne in the 42nd minute after clashing heads with Iain Henderson but came back on.

Lineout performed much better than against Wales. That Ireland had their full complement of jumping options likely helped. Peter O'Mahony being sent off last week hurt the set piece. The Ulster player did not contribute enough in loose play.

Part of a solid Irish scrum. Porter dominated French loosehead Cyril Baille while they were on the pitch together. Carried seven times for 30m and made 10 tackles.

Replaced by Tadhg Furlong after 52 minutes.

Quieter game than he had last week against Wales but was still very good. Perhaps Ireland's best player. Won three turnovers and was a reliable lineout option. Carried seven times for 35m and made 12 tackles.

Replaced by Ultan Dillane with eight minutes to go.

A very good performance in his first game as Ireland captain. Irish lineout worked well with Henderson a key option. Carried six times for 31m and made nine tackles 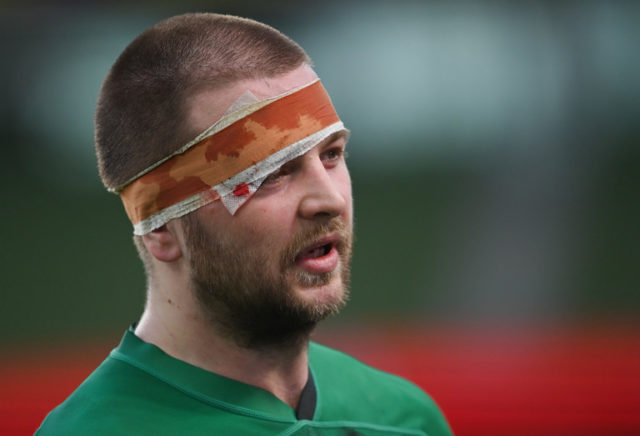 14 February 2021; Iain Henderson of Ireland following the Six Nations match between Ireland and France at the Aviva Stadium in Dublin. Photo by Ramsey Cardy/Sportsfile

Very nearly intercepted a French lineout in the 25th minute which would have led to a try if he'd caught it.

Replaced by Ultan Dillane in the 42nd minute after clashing heads with Cian Healy. Subsequently came back on.

Ruddock's 27th cap but his first start in the Six Nations. A good lineout option, both on Ireland's throw and as a jumper to disrupt the opposition.

Carried nine times for 49m and made seven tackles.

Won a turnover in 50th minute after sloppy French lineout but was not involved enough. Carried five times for 23m and made six tackles.

Another tireless performance. Carried 19 times for 93m and made eight tackles.

Knocked on with Ireland in a good position 14th minute and gave away penalty 35th minute for going off his feet when Ireland were also in a good spot.

Made an instant impact off the bench, scoring his first try for Ireland. Lineout remained solid when he was on. Contributed much more from play than Rob Herring, carrying three times for 43m (most of that his try) and made five tackles.

Played 26 minutes. Made two carries for 9m and made five tackles.

Carried four times for 18m and made two tackles.

Played 18 minutes as a blood sub for Iain Henderson and added another seven when he replaced Tadhg Beirne. Carried twice for 15m and made three tackles.

Played just 15 minutes but made notable contributions. Won an excellent turnover late in the game with Ireland in their own 22. Carried twice for 10m.

Surprisingly, the young Munster player did not make his international debut as Andy Farrell chose to stick with Jamison Gibson-Park for the full 80 minutes.

Came on in the 42nd minute as a HIA replacement for Billy Burns and stayed on the pitch. His boot, combined with Ronan Kelleher's try, got Ireland back in the game in the second half.

Made an excellent conversion kick for Ronan Kelleher's try and a knocked over a long range penalty in the 66th minute.

Ross Byrne with a big kick! 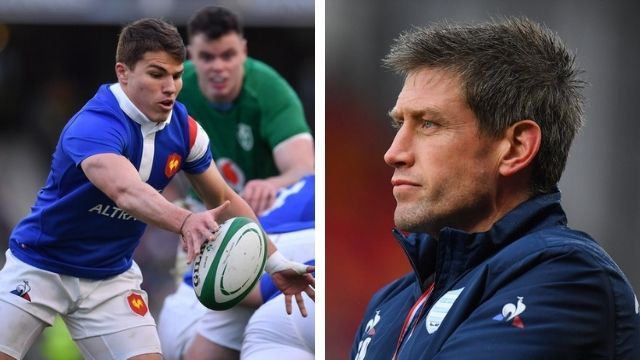