It was a performance every generation of Irish rugby fans wanted to see and will go down as one of the greatest of all-time. There were mistakes across the field but every Irishman did enough of what they needed to do in order to get the job done. Conor Murray was the pick of the bunch but there were heroes all over the field.

Missed his tackle for the opening try, but made amends in beating three men and bringing Ireland to the tryline for their opening five-pointer. Also made a superb take in the air, beating Ben Smith, in the first period. One of his finest performances for Ireland.

Marshalled Julian Savea excellently for the entire match, which was his task in chief today: stopping the best winger in the world. Job done. The one-legged tackle on 55 minutes was the pick of the bunch.

Cut apart for the opening try but thereafter spearheaded and marshalled the Ireland defence and kept George Moala quiet for the most part. He can’t display his attacking potent from 13 as he does from 15, but he gives an unequalled level of calm in midfield that makes him a sure-fire pick.

Cut apart for the opening try but thereafter gave a beastley display. Forced a scrum put-in for Ireland just before the half hour as he held up the runner. Made a huge tackle on Malaki Fekitoa in the first half as he continued an aggressive display in defence. His power and strength for the match-winning try summed up a superb performance.

Held a poor high-body position in his attempted tackle for the first try. And then had a chance to run with the ball and went straight into traffic. But his performance improved dramatically after that. Made an excellent clearance with the boot, as well as forcing Waisale Naholo into a knock-on from a grubber directed right at the ABs winger. When the chance came he took it with his try after the break.

Took his early points well, mixed his game well in terms of Garryowens, spreading the ball wide and using his forwards as runners. A missed conversion early doors was the only blot on his copybook. His penalty kick to the corner on 47 minutes, and his final pass out wide which led to Zebo’s try, were exemplary. Completely outshone opposite number Beauden Barrett.

Consistent in all aspects of the game. Brilliant snipe from a ruck at short range to score the opening try. Even stood in as place kicker when Sexton had to leave the field. Forcing Savea into touch in his in-goal area with a massive tackle led to Henshaw’s match-securing try. Best number nine in the world at present.

As ever solid in the scrum and combined brilliantly with Tadhg Furlong to force a turnover just before half-time. Also chipped in with an excellent and direct carry on 55 minutes. The man is a beast and getting better with every Test match.

Lineout darts were solid. Also made a huge contribution both at the breakdown and in the loose. Led from the front throughout. Will go down as one of Ireland’s best hookers and this performance will be one of his crowning achievements. 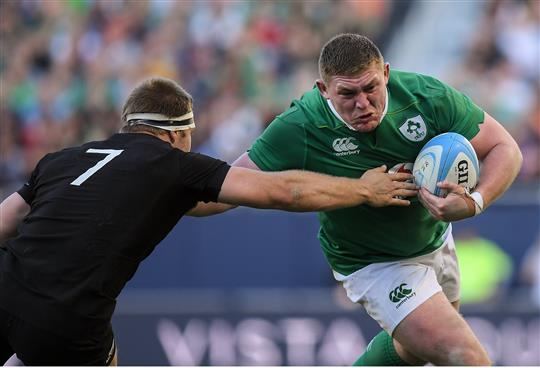 A massive tackle on Smith as the ABs fullback tried to play out of his own 22 took off the roof at Solider Field. Teamed up with McGrath to make another one of Ireland’s crucial turnovers just before the break. Another massive tackle on Kieran Read after the break stood out in a superb performance.

Like many of his team-mates Ryan made a huge first-half turnover as Ireland gave a defensive masterclass. Solid and dependable as ever. And people said his career was over a few years ago. He’s proved everyone wrong.

Has become one of the best lineout specialists in the world and showed that in Chicago. Also competed doggedly in the loose. An unglamorous player who deserves way more credit than he is given.

Tremendous work to get back and attempt to stop the first NZ try and very nearly did so. Claimed a valuable loose ball off the back of a New Zealand attacking lineout early on. Did superbly well to burrow over from close distance early on for the try with a combination of strength and low-body position. Involved with Henshaw and Best in forcing a vital turnover before the half hour. Another massive turnover just before half-time cut off the All Blacks final chance before the break. Blotted his copy book with two missed tackles second half, but this boy is developing into the complete package.

Was the man credited with Ireland’s first try as he marshalled the maul from the back. Got little chance to do much else as he was forced from the field after 26 minutes with what appeared to be a potentially serious injury.

Hugely industrious at the breakdown. Possibly should have done better in slipping off his tackle for the ABs second try, but Heaslip has become this team’s water carrier and is selfless in his workload and commitment to the cause.

Called into the tie for the injured Murphy early on. Didn’t have the same impact in the loose as he does at club level for Leinster but slotted in seamlessly as the back row worked tirelessly to win ball at the breakdown.

Solid and dependable. Developing into a fine player although was mainly called on for solidity today.

Brilliant kick to the corner with 15 to go relieved pressure on Ireland. Nailed a conversion from the final try and generally took the seismic shift up from being an AIL player last season to being part of a team that can beat the All Blacks. Plenty more to come from this lad.

Mised a vital tackle just after he entered the field which led to Scott Barrett’s try but did little wrong other than that.

Wasn’t on the pitch long enough to do much going forward as Ireland mostly manned the pumps in defence but made zero mistakes.

Got on for the last ten minutes and put his head down and defended for his life and got the basics right.