Reporting from the Aviva Stadium.

Take off in the capital. A Leinster team that looked to be meandering in recent times returned to roar. Their captain Johnny Sexton led them to it.

This weekend has seen two performances of quality that this stage demanded. It's no surprise they both came from Europe's top two teams in recent years. It's the only final pairing that could claim to pit the top two against each other and we'll see it next month.

In the sweltering heat, it was Leinster who matched it with cool heads. Very quickly Toulouse took the lead. It lasted all of four minutes. From there Leinster launched, Sexton slotted penalties and James Lowe blasted down the wing.

The mixture of forward dominance and back attack proved fruitful, never more so than when Luke McGrath dotted down after a driving maul made initial inroads.

The sides continued to exchange penalties but Toulouse never looked likely to mount a comeback. Scott Fardy added gloss towards the end. There are levels to this stuff and Leinster were a level above. It finished 30-12. 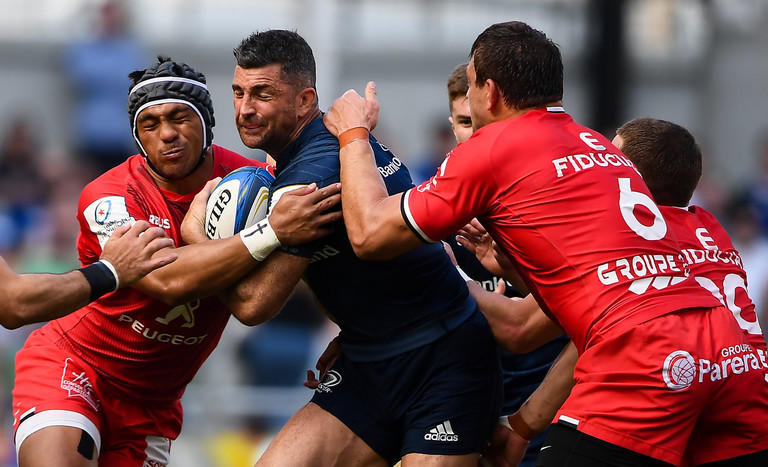 Kicked on again after his try-scoring brilliance last week. Safe as houses, per usual. Stormed into the line to carry well when called upon.

Touched the ball least of any Leinster back but that shouldn't be used as a criticism of his ability as he just wasn't needed on the day. One missed tackle aside did what he needed to in defence. Covered kicks behind very well. Brilliant intercept when Leinster needed it.

A day that hinted at how great the Sexton-Henshaw-Ringrose axis can be. A stand-out moment came with ten minutes on the clock. Shot out of the line and mis-tackled Kolbe but forced him back inside. Then bounced back up to make two quick tackles in quick succession.

If ever there was a phase that showed all Henshaw brings, it as midway through the first half in the boiling heat. A fantastic kick in behind to ping Toulouse back and followed it up with a great chase to counter the quick line-out. To top it off, pilled into the breakdown and forced a Leinster scrum.

Rightly sin-binned for a deliberate intervention with Leinster scrambling but as it turned out it only cost them three points when it could have been seven. A massive shift overall and lasted the guts of the entire game which is promising.

One of those days. An excellent try in the corner to kick things off. His kick-chase is constantly well-timed. The perfect Leinster response to Cheslin Kolbe. Even tried his hand at jackling late in the game.

Has to be in the team for the final. 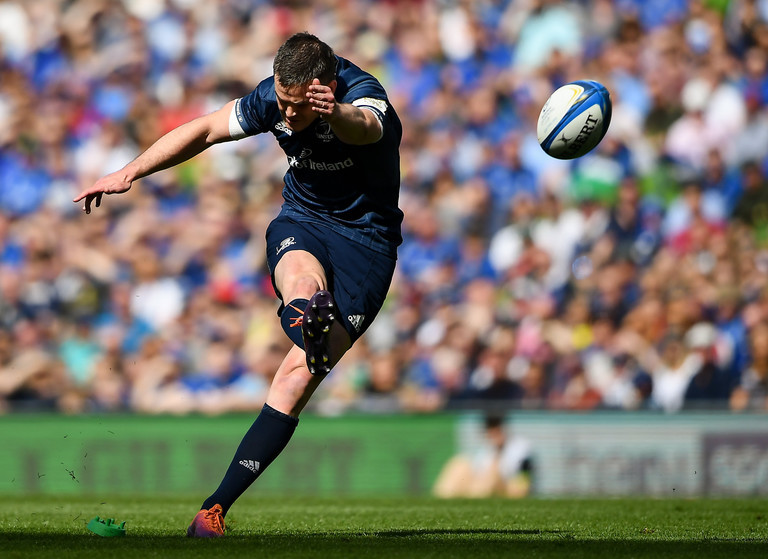 Showed why an on-form Sexton has been sorely missed. Started with a pinpoint conversion, followed it up with a strong carry right to the line in the build-up to Lowe's try and nailed the conversion from the touchline afterwards.

In every facet, he delivered. Continued to get every inch out of his touch-finders. Sprayed the ball wide with real accuracy. When he's on it there's few who can match him.

Becoming a really intelligent rugby player. Shot up in defence when needed to force Toulouse back inside, stood into the backfield to cover when numbers were short and hunted around the breakdown in that Faf de Klerk type fashion.

Had Faumaina in real trouble at the scrum from minute one and as fatigue set in started to make bits of him. Forced a penalty just before half-time that should have ended in a try but the TMO ruled it out due to an infringement off the ball in the build-up. Taken off to a standing ovation before the hour mark.

Looked lively early on as he got on the ball in the wide channels but limped off soon after. Replaced by James Tracy. 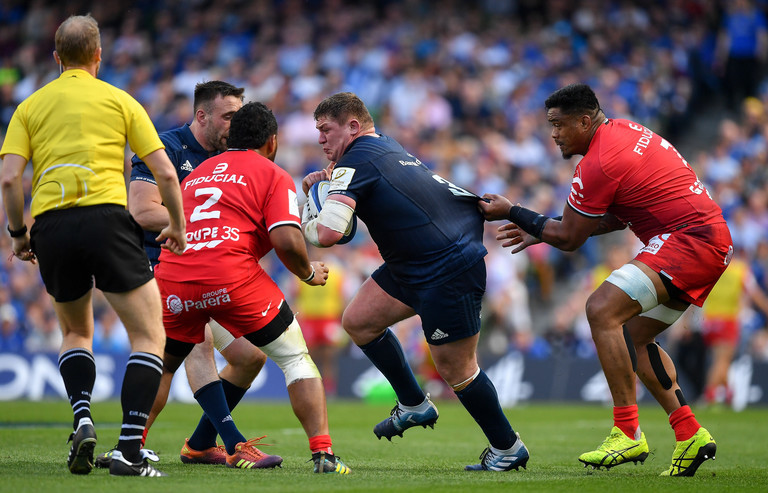 Delivered the now trademark Furlong off-load in attack and proved a serious menace at the breakdown in defence. 100% in the scrum. Replaced by Michael Bent midway through the second half.

Despite a monstrous pack he still managed to have a seismic impact on the line-out.

There are semi-trailer trucks that carry less than James Ryan does. When pundits took of the new breed the Leinster look epitomises it. Just consistently a brilliant all-around operator. Line-out, breakdown or loose, performs expertly in everyone.

Came in as a late replacement for Rhys Ruddock. Finished his tries very well after a real team effort. Came off temporarily with a blood sub but it did little to hinder him as he stormed back into the game on his return. Made the call to go to the corner late in the game which ended in his own score.

Big call between Gibson-Park and Fardy for that other foreign spot in the final.

Three missed tackles but only one was really costly. Only one big break going forward which came after a clever line in the second half. Could maybe use his footwork more before contact but moving in the right direction in terms of coming back to form. 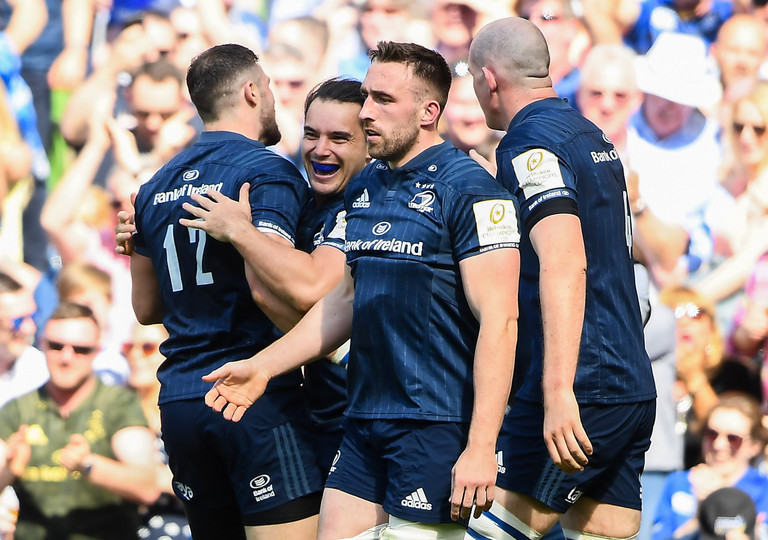 Leinster faced a huge front eight today and met it head-on. They were shrewd in doing so, moving them around the pitch and keeping the tempo high in hot conditions. Conan's quick taps and clever lines off nine were a big part of that. The first player to make it to double-digit tackles as well.

Darts were on point and his contribution around the field was strong. Impressive in defence.

Kept the temp high and his kicks were on the money.

Ed Byrne came on midway through the second half with the game as good as over. Max Deegan, Caelen Doris, Hugh  O'Sullivan and Rory O'Loughlin came on with little over a minute left.

Johnny Sexton said after the game Leinster must "prepare now for the biggest battle of their careers." That's telling.

Rugby
3 weeks ago
By Sean Meehan
The Champions Cup Could Be Set To Revert To 24 Teams Next Season
Rugby
1 month ago
By Balls Team
Bernard Laporte Has Proposed A Radical Change To Club Rugby
Rugby
3 months ago
By Gary Connaughton
Saracens Could Be About To Be Booted Out Of The Champions Cup
Popular on Balls
GAA
10 hours ago
By Gary Connaughton
Confirmed: We Now Have An Official Date For The GAA's Return
11