Rassie Erasmus has not shied away from the mind games with Lions head coach Warren Gatland during the tour to South Africa, with both men putting pressure on officials as they seek to swing things in their team's favour.

Most of Gatland's talking has been done in press conferences and interviews, but Erasmus has often used social media to get his point across.

We have already told you how he appeared in the Twitter replies of the Irish Examiner in order to call out the Kiwi, but that has not been the only example.

Yesterday, Erasmus replied to a faceless account operated by 'Jaco Johan' that had uploaded high-quality video analysis of where South Africa had possibly been hard done by by the referee in the opening test against the Lions.

The 48-year old seemed gracious in his quote retweet, and shared the footage with his 35,000 followers.

Thanks. This is rugby - sometimes calls go for you and other times they dont https://t.co/ONZp0uoWJF

The retweet has captured the imagination of many rugby journalists following the Lions tour. Despite joining the social media account in 2016, Jaco Johan has tweeted only twice. Both came over the last couple of weeks, and both times provided analysis of refereeing mistakes in Lions fixtures. Erasmus has retweeted both Jaco Johan tweets.

Many rugby journalists have used their own Twitter accounts to note how unusual it is that Erasmus would retweet Jaco Johan.

I mean, yes, it certainly seems like Rassie Erasmus is RTing his secret alt account and having a conversation with himself in the process… but what would I know about Rassie having conversations with Rassie?

Interestingly, Erasmus today uploaded a video analysis clip to his own personal account analysing a tackle on Cheslin Kolbe, and criticising Mako Vunipola's response to the incident.

Speaking at a media event today, Lions coach Steve Tandy replied to Erasmus's tweet saying: "It is his viewpoint, we thought the officials did a good job at the weekend, and if there is anything we need to bring up we will go through the appropriate channels."

UPDATE: Erasmus has formally denied being behind Jaco Johan account at a press event on Tuesday. He said:

No, I am not Jaco Johan, I am Rassie Erasmus.

“So he’s a very big supporter, a really funny guy and I quite enjoy the things that he does.

“Why I am so active on Twitter, well I retweeted two or three that I really thought were accurate and then I tweeted twice myself for simple reasons.” 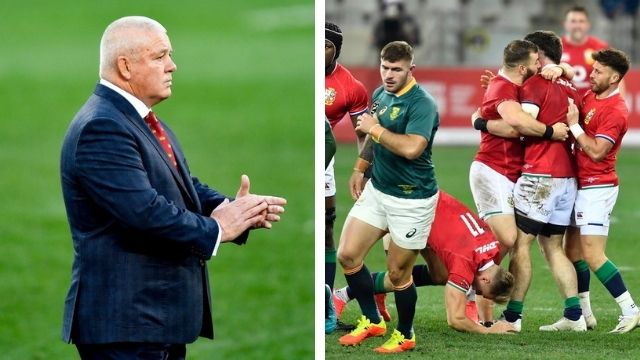 Rugby
2 months ago
By Colman Stanley
Rassie Erasmus Explains Why Modern Rugby Is 'Impossible' To Referee
Rugby
2 months ago
By Gary Connaughton
Rassie Erasmus Admits He Would Be In Favour Of South Africa Joining The Six Nations
Rugby
9 months ago
By Gary Connaughton
South Africa Captain Kolisi Launches Scathing Attack On Lions Test Referee
Popular on Balls
GAA
1 day ago
By PJ Browne
The Draw Has Been Made For Tailteann Cup Opening Rounds
GAA
2 days ago
By PJ Browne
Donal Óg Cusack Defends Dublin Hurlers After John Mullane Criticism
The Rewind
3 days ago
By Eoin Harrington
Watch: Brilliant Dermot Morgan Dublin Segment From 'The Travel Show' Resurfaces
Football
3 days ago
By Eoin Harrington
Alan Shearer Says Roy Keane "Ran Away" From Him After Famous Clash