A Reminder: The Referees Who'll Be Controlling Ireland's 6 Nations Games In 2017

The referees list for the Six Nations was released in early December but it's worth a reminder of who's taking charge of the Ireland matches.

At the time of their release, the headlines were hogged by the fact that Wayne Barnes had once again been assigned to referee the Wales-Ireland game.

The Six Nations Council clearly love what he's done with the fixture. This will be the 6th time in ten years that Barnes has refereed Wales-Ireland.

It's a tawdry business totting up a team's win-loss ratio under a specific referee. It's unbecoming of rugby men. There is always a whingy subtext.

Of the previous five, Ireland have won on two occasions. He was in charge on the historic day when Ireland claimed the Grand Slam in Cardiff. Though the penalty count went heavily in Wales's favour that day, Brian O'Driscoll - an admirer of Barnes's refereeing - was quick to praise the ref for twigging there was a chance he had grounded the ball under a forest of bodies for the opening try. Other refs might have missed it. Barnes was also referee when Ireland demolished Wales 26-3 in Dublin in 2014.

Notwithstanding these successes, Barnes remains deeply unpopular with Irish supporters. Two years ago, a fair proportion of the Irish fanbase decided that Barnes had screwed them over in Cardiff, costing Ireland the Grand Slam. This naturally had its roots in sour grapes but there were plenty of penalties shipped in the early stages.

In 2012, he alienated the home support when he failed to send off Bradley Davies for a blatant and very dangerous spear tackle on Donnacha Ryan. Late in the game, he handed Stephen Ferris the same penalty after very dubiously interpreting a tackle on Ian Evans as a tip tackle. 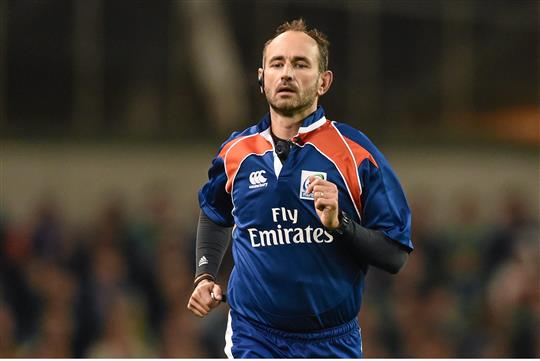 This weekend at Murrayfield, Romain Poite is the man with the whistle. A decade ago, when the Frenchman emerged as a new hot shot referee he evolved a reputation for rewarding the dominant scrum. He also became especially unpopular in Munster for a couple of displays in European games. He earned the admiration of Stephen Jones in the process.

The Ireland-Italy match will be refereed by none other than the 2006-07 Guinness Premiership Player of the Season. Glen Jackson played at out-half for the Waikato Chiefs between 1999 and 2004 and then Saracens from 2004 to 2010. He quit that year and returned home to embark on his refereeing career. He is much less well known among northern hemisphere rugby fans than the other four. Refereed Ireland's 3rd test in South Africa last summer.

The Ireland-France game will be reffed by the wildly popular Nigel Owens.

Unlike Wayne Barnes, whose every call against Ireland is recalled with savage vindictiveness, Owens is forgiven for any contentious or costly decisions. In 2012, he was drawn into a Twitter battle with Liam Toland after awarding a penalty against Ireland late in a tight game against New Zealand in Christchurch.

Ireland were drawing 19-19 with the clock winding down and appeared to be enjoying supremacy in the scrum. After a couple of restarted scrums, Ireland pushed the Kiwis backwards. Owens surprised people by adjudging that Ireland had run around the scrum. New Zealand had the chance to mount one last attack from which Carter nailed his second attempt at a drop goal. Heavily praised for his communication skills and his commitment to a flowing game. 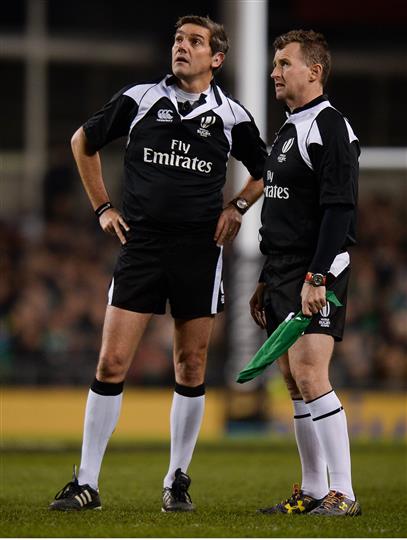 Our final game of the Six Nations against England will be refereed by Jerome Garces, another official well known to Irish fans. Has also been assigned to referee the Wales-England game. Generally popular and well respected, he refereed Ireland twice in the 2015 World Cup, overseeing the narrow win over Italy and the demoralising quarter-final defeat to Argentina.

More recently, he refereed the recent Ireland-Australia November international on a day when the officiating performance displeased Michael Cheika.

Read more: "Deary Me, I Used To Feel Sorry For Ireland" - Most Memorable Moments From Ireland v Scotland