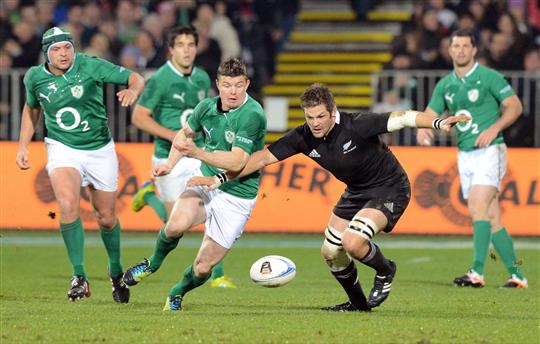 Probably Ireland's best ever rugby player - Brian O'Driscoll broke a lot of records in his career, and more than a year after his retirement still holds some of them.

Probably the most important of which is his 141 international test caps for Ireland and the Irish & British Lions which means his name is at the top of the list of all players in the world.

But, that record is under threat.

This weekend, New Zealand travel to Sydney to face Australia to decide the Rugby Championship. They will be lead by their captain Richie McCaw. McCaw will be earning his 141st cap for New Zealand, and will equal O'Driscoll's record.

While O'Driscoll held the record from when he broke it against Italy in his final Irish home game until this weekend, McCaw is likely to keep his name at the top for even longer. The next active player on the list is fellow All Black Kevan Mealamu at 125 - who has already announced that he will retire after the World Cup. Neither Mealamu, or the next few active players on the list - Victor Matfield (122), and Gethin Jenkins (119) aren't likely to gain enough caps to break it.

This really just emphasises how impressive the careers of McCaw, O'Driscoll and former record holder George Gregan really had.

You have to go down to the likes of Alun Wyn Jones (95), or Stephen Moore (94) who have enough years left to be able to reach the impressive figure. Paul O'Connell (108) is the highest active Irish player, but he has also signalled his international retirement after the World Cup.

Rory Best (83), Jamie Heaslip (72), Rob Kearney (62) are next in line for Irish players who could challenge McCaw in several years.

See Also: The Where The What And The When - Your Essential Brian O'Driscoll Infographic