Former Ireland international Ronan O'Gara has spoken out about the lack of excitement on this year's Lions tour, and has suggested that a strong close to the test series is needed to "save" the tour.

The second test between the Lions and South Africa was mired by several stoppages, with two large scale shuffles breaking out during the first half. The first 40 minutes alone took 62 minutes to complete, and the reviews from spectators and pundits were widely damning.

Ronan O'Gara thinks that, for the sake of the Lions series, a repeat of the second test cannot be afforded this evening in Cape Town. He told Rugby Union Weekly:

The series is 1-1 and I don't feel any positivity or excitement about this weekend which is startling when you think about who is playing and what's at stake. It's very easy to understand the aggrievements of supporters because unfortunately there have been very little positive actions on the pitch.

It is very disappointing because you are talking about the best of the best of the British and Irish Lions against South Africa. There has been cynicism, anger and frustration. The rugby needs to be really strong at the weekend for this series to be saved.

It has been a tough few weeks on tour that will have done no favours for future PR of Lions tours. Springboks coach Rassie Erasmus has engaged in some extraordinary social media takedowns of both the Lions and the officiating on tour, while there have been COVID scares aplenty against the backdrop of mass civil unrest in South Africa.

O'Gara, who played on the last Lions tour to South Africa in 2009, fears that the two sides are going in opposite directions, with the Springboks growing in confidence after taking the series lead in the second test.

South Africa are building. They will inevitably be better whereas all of a sudden the Lions is almost a split personality - what are we?

Do we now change our philosophy, change our style and try and exploit the space that is inevitably there? Or do we double down on this type of play that we've seen? I think that is what Gatland has done in his selection.

I don't think it's the smartest way to get a result, but perhaps it is in the last Test. When you try to play the way the Springboks play and you don't get results, it ends up pretty ugly.

This is the third Lions tour Warren Gatland has taken charge of, and it is the third that has gone down to the final test. He has yet to lose a Lions series yet but, if Ronan O'Gara is right, he will have his work cut out to conjure up an "ugly" series win this time around. 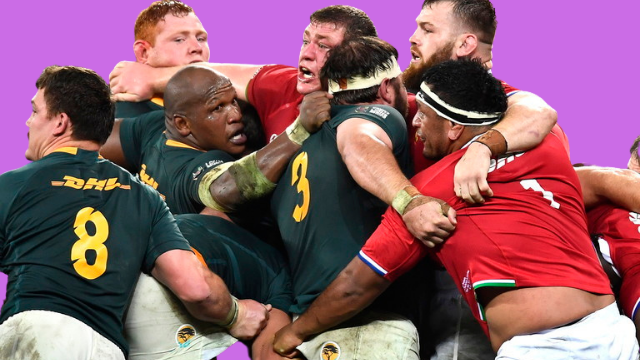