After Ireland's win against England on Saturday evening, the RTÉ panel of Brent Pope, Eddie O'Sullivan and Shane Horgan picked their Lions XV for this summer's tour of New Zealand.

The effect which Lions selection had on Saturday's games should not be underestimated according to Shane Horgan, the former Ireland winger suggested it certainly affected both Irish and Welsh players.

Horgan said that he would have preferred Sam Warburton at openside. However, he was outvoted by Pope and O'Sullivan. Horgan also added that Warburton could yet be named Lions captain by Warren Gatland. That's despite not currently being Wales captain.

Eddie O'Sullivan believes Jonathan Joseph at outside centre is not up to the level required to face the All Blacks. He suggested even Jared Payne, for his defensive organisation skills, could play at 13. 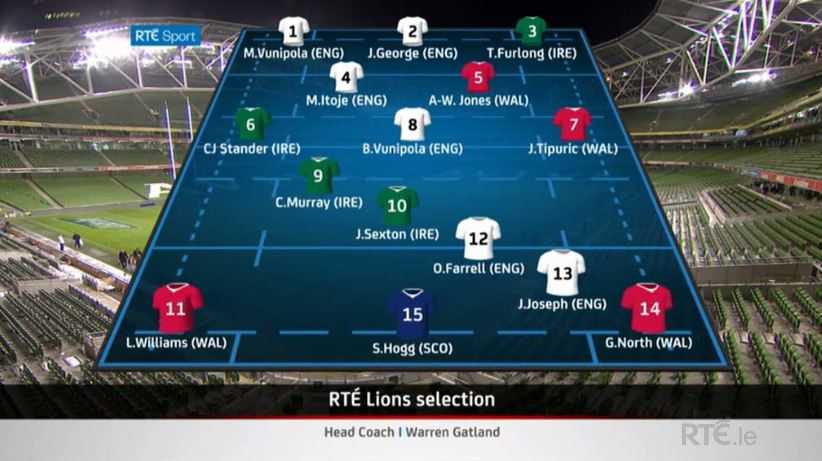 Rugby
5 days ago
By Gary Connaughton
O'Sullivan Worried About Future Of Rugby If Six Nations Goes Behind Pay Wall
Rugby
2 months ago
By Balls Team
A Tribute To Eddie O'Sullivan's Delightfully Weird One-Liners
Rugby
1 year ago
By Maurice Brosnan
'It Was Carnage' - The Day That Forged Ireland's World Cup Anxiety
Popular on Balls
MMA
5 hours ago
By Donny Mahoney
Ireland's UFC Fighters: Where Are They Now?
Football
23 hours ago
By Gary Connaughton
Watch: Frank Lampard Launches Strange Unprovoked Attack On Journalist
33