The Dog and Piano in Carmerthen, Wales should have been a place of high spirits and good natured banter this weekend as Wales beat Scotland in the opening match of the Six Nations. As it turned out the mood in the Welsh pub turned sour as a punter randomly decided to drop his kacks and let fly on a table in the pub following the match.

Speaking to Wales Online, owner of the Dog and Piano Nicola Morris, recounted her recollection the incident:

There was a group of around 12-15 men who had come in after the rugby. I was walking around the pub when a member of staff came over and alerted me to what had happened. Someone had defecated on the table at the front of the pub. Another one of the group had then got an empty pint glass and stuck it in the ‘mess’.

Morris went on to say how she had never come across something like this working in a pub before and how her career and how the offender managed leave the pub without being found out:

Nothing like this has ever happened before - working in a pub, you have to clean things up in the toilet from time to time, but not this. My dog is better behaved. Some left straight away, but even the ones that did must have stood by while he was doing it. I didn’t know it at the time, but the last one to leave was the person who did it. He even gave me a hug before he left. What happened is beyond belief and it sickens us to the pit of our stomachs.

The perpetrator of the deuce did post a letter to the pub apologising profusely for the incident, blaming too much alcohol on the *ahem* lack of judgement. He has also offered to clean the pub or make a donation to a charity of their choice: 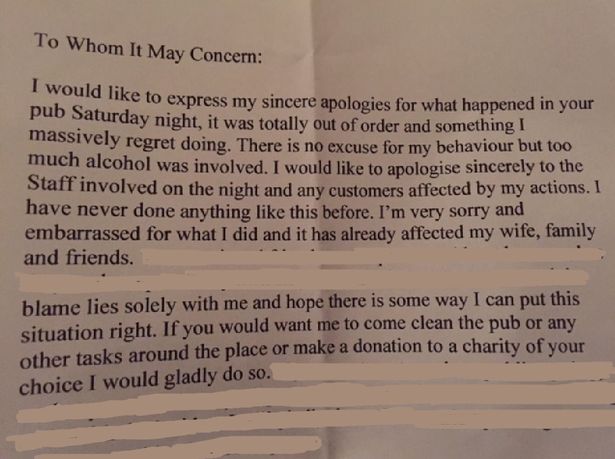