Is Rugby Really The 'People's Game?' Here's What The Numbers Say

Rugby Country sloughed off the snow and ice to last night proclaim its Declaration of Independence from a slightly elevated platform in a Montrose Studio. "Rugby is arguably the people's game" pronounced anchor Daire O'Brien, beginning a debate which was met with a predictable mixture of bemusement and derision from The Football Men and The Gaels.

O'Brien admitted that participation and attendance figures are dwarfed by other sports in Ireland, but used the fact that "everyone has an opinion" on the Six Nations and The Rugby as the kernel of his argument. Conflating opining with ownership or reverence is flawed, but it is undoubtedly true that the Irish rugby team have a sizeable hold on the nation's attention.

But how popular is the sport in Ireland, overall? We've taken a look at the data under four headings to ascertain as to whether we are all living in Rugby Country, regardless of our postcodes.

Participation-wise, rugby is well down the list of sports in Ireland.

The most recent Annual Report by the IRFU totalled the number of registered players at all levels in Ireland at 194,387, including those who play tag and social rugby.

In terms of the number of people playing rugby of Ireland relative to other sports, however it barely registers. There are two relevant reports here: an ESRI Report from 2015 and figures on the Central Statistics Office website from 2013.

To start with the most recent report, Rugby is not included in the list of the Top 15 most-played sports in Ireland. Perhaps troublingly, this report classed snooker, ten-pin bowling, pitch and putt and fishing as sports. 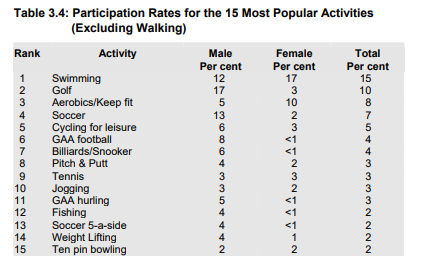 More satisfying are the figures on the CSO website, from 2013. Of those who replied and were aged 15 or over, 72.5% say that they partake in sport and physical activity. 37.8% said that they play a sport along with walking recreationally, with rugby ranked bottom of the 12 sports named. It's below Yoga/Pilates, Dance, and Tennis.

Remarkably, of all the rugby players who responded to the CSO, 5.1% are either professional or semi-professional. Compare this to soccer, which comes in at 0.2%.

The CSO figures are slightly skewed, however, by the fact it does not include anyone under the age of 15. Even allowing for that, however, it's pretty clear that it lags way behind the major sports for participation.

The most accurate and most recent attendance figures were published by Sport Ireland in 2015, and show that rugby is the fourth-best attended sport in the country. They show that Gaelic football is by some distance the best-attended, followed by soccer. Hurling and Camogie are third, well ahead of rugby in fourth.

Here they are presented below, compared to figures from 2013 and 2011 along with the totals of the other major sports. The sharp decline between 2013 and 2015 for rugby, by the way, is partly due to the fact that there were no home November internationals owing to the World Cup. 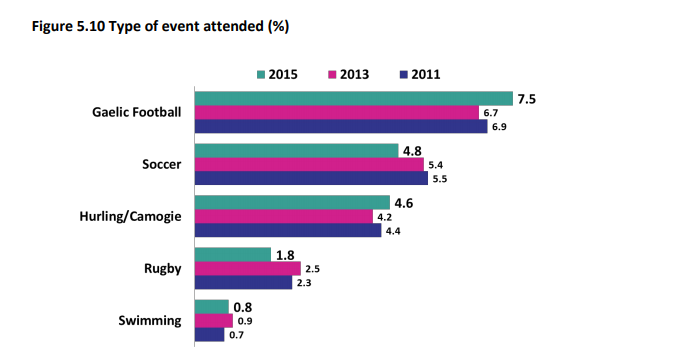 We'll get to the biggest games in a moment, but for an impression of the week-to-week figures, TG4 kindly sent us figures pertaining to the Allianz Leagues vs the PRo14. Their highest rugby rating this season was for Munster/Connacht in January, which reached 140,000. Their highest Allianz League game last season, by contrast, was the Division 1 Football Final between Kerry and Dublin was watched by 354,000. The hurling final attracted 209,000 people.

Their average viewerhip for the Pro14 this season (prior to the Six Nations) was 71,000; that figure for last year's Allianz Leagues was 125,000.

The deductions to be made from this are that the majority of Irish TV viewers are, essentially, event junkies. So Ireland's games in Euro 2012 and 2016 topped their respective years, while the All-Ireland finals are consistently among the most-watched broadcasts of the year.

While a high-profile Irish soccer international will always outperform a Six Nations rugby game, the former is rarer. So the  average ranking for the most popular rugby game in these lists over the last six years is 6th, football and GAA are third and second respectively.

The Rugby World Cup, meanwhile, topped the ratings in 2015. Irish fans will dutifully watch the Six Nations, with all of Ireland's games bar the clashes with Italy making the top 20 each year.

Overall, there seems to be a higher general interest in football than rugby - while the World Cup final and finals of Euro 2012 and 2016 appear in the lists, the Rugby World Cup final is nowhere to be seen.

Let's run down how rugby ranked in these lists, beginning with 2012.

In a stacked year (the Olympics; the collective national psychodrama called Euro 2012) rugby's highest-ranked position was ninth - the Six Nations game between Ireland and Wales. Six Nations games against England, France and Scotland were ranked 12th, 13th, and 14th respectively while the coverage of the postponed game with France came in at number 20. 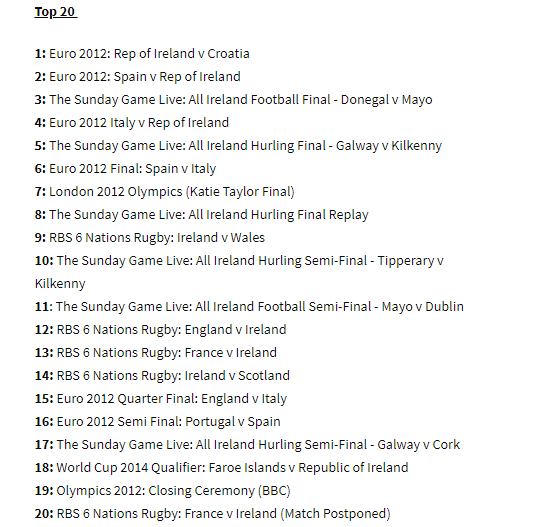 In the absence of the Euros and the Olympics, only the All-Ireland finals and the Dublin/Kerry semi-final was more popular than the most-watched rugby game: the Six Nations clash with England. In total, there are six Irish rugby games in the top 20, (once again all of the Six Nations games bar the Italy game, along with autumn games with Australia and that one against the All Blacks). Full details here.

Rugby topped the charts in 2014 - the amazing Six Nations crescendo in Paris was the most-watched Irish sports programme of that year. It finished ahead of the World Cup final in second, and the All-Ireland finals in third and fourth. The Six Nations clash with England came in fifth. Overall, there were seven Irish rugby games in the top 20. 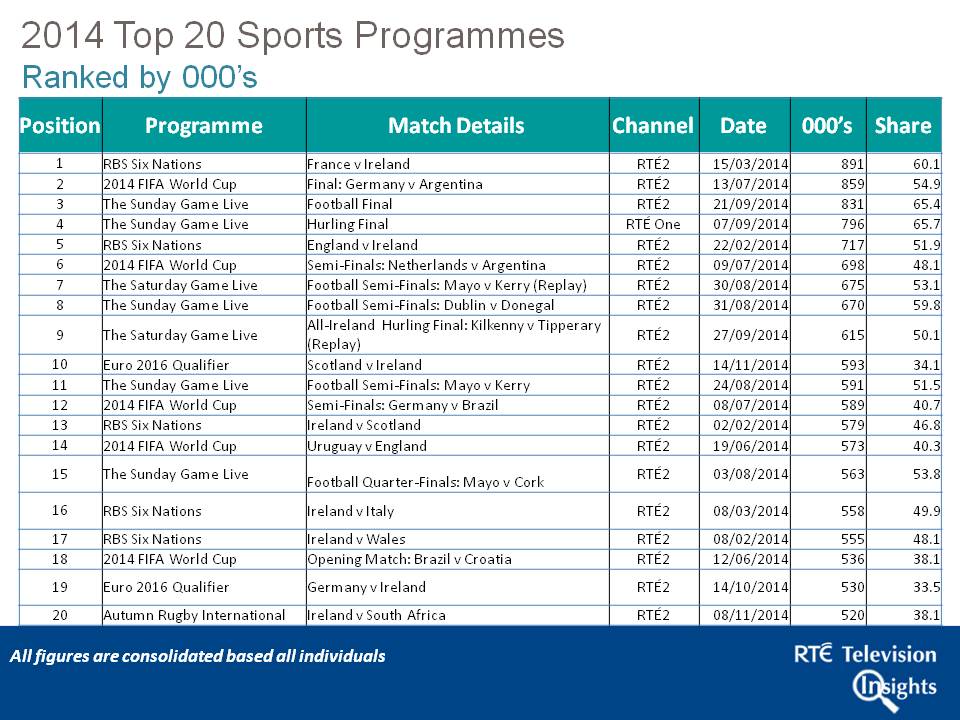 Here, the sports programmes are bundled in with all other, lesser programming in Ireland. Thanks to the World Cup, Ireland's clashes with France, Argentina and Italy come in at second, third and fourth. The All-Ireland football final was ranked fifth. For the first time, a rugby match not featuring Ireland breached the top 20 - England and Australia at the World Cup ranked 16th, ahead of a couple of  Dublin/Mayo clashes in the championship. 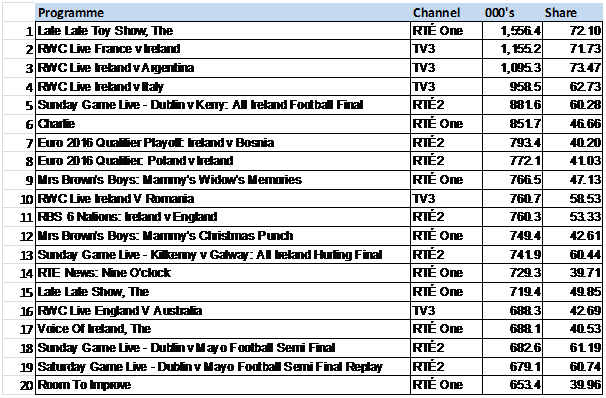 2016 was a very different year, as Euro 2016 monopolised television. The November defeat to New Zealand was the highest-ranked rugby game, at 16th, while Six Nations games with France and England squeezed into the top 20. 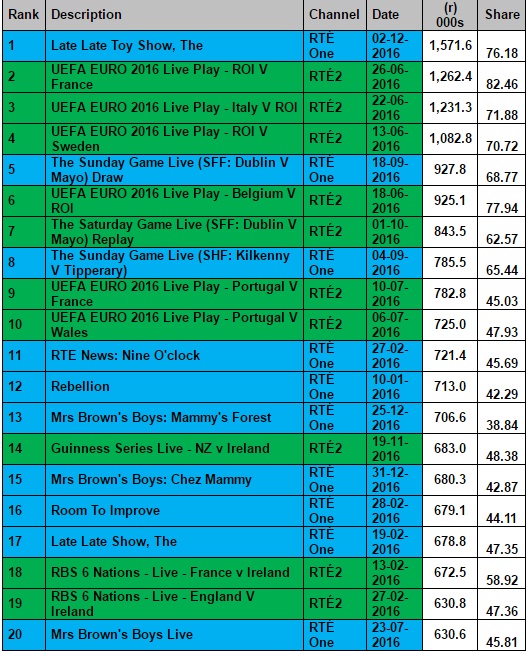 Last year once again saw rugby eclipsed by the All-Ireland finals and the collective national psychodrama of the World Cup playoff defeat to Denmark. Once again, however, the Six Nations games aside from the Italian clash made the top 20. 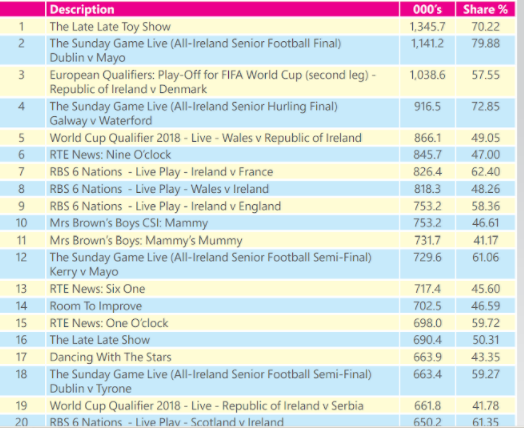 Irish rugby is miles out in front of everyone when it comes to Social Media.

That Irish Rugby's social media following is more than the GAA and the FAI's combined is incredible.

It's wrong to say that rugby is the people's game - it is evident that there are myriad sports more popular in terms of participation and attendance, but the Irish Rugby team are phenomenally popular.

Much of this has to do with the place of the Six Nations in our hearts. (TV figures show that Summer and Autumn internationals rarely engender much support). The Six Nations, though, is a highly-respected competition which we have a chance of winning.

Also, it offers us an annual chance of beating England.

That, you feel, is the people's sport.

Rugby
1 week ago
By PJ Browne
'My Son Played GAA And Rugby. He Met People From All Aspects Of Northern Ireland'
Football
1 month ago
By Balls Team
11 Of The Most Memorable On-Pitch Conversations In Sporting History
Previous Next