The RDS was able to welcome back 1,200 Leinster supporters to the ground for tonight's Rainbow Cup, and while it wasn't the most important of fixtures, it was great to finally see a decent amount of fans return to a sporting event in this country.

Those who managed to get their hands on a ticket were treated to some excellent rugby from the home side, with Leinster running out 38-7 winners over Dragons.

The likes of Scott Penny, Garry Ringrose, and Jordan Larmour all touched down for the hosts, but the try of the night undoubtedly came from Ryan Baird.

The big second row produced a remarkable winding run in midfield, playing a bit of a one-two with Jamison Gibson-Park before burning the opposition defenders with his pace.

Ryan Baird starts the move with a pirouette in midfield, then gets on the end of Jamison Gibson-Park's pass.

Decent feet for a big man.

At only 21-years old, Baird has proven he is a player of massive quality. He has already made an impact at international level and is likely to add to his three caps during the upcoming summer tests against Japan and the USA.

Another memorable moment came in the second half as Scott Fardy and Michael Bent walked off the pitch for the final time as Leinster players, receiving a nice ovation from the supporters.

"That's what you from people who come in to the province from outside."

"They buy into it, they become fans' favourites."

The RDS says farewell to Michael Bent and Scott Fardy on their final appearance for Leinster.#LEIvDRA #GuinnessPRO14RainbowCup pic.twitter.com/6pee9yZIpQ

They will be delighted to have had a crowd there to wish them well. 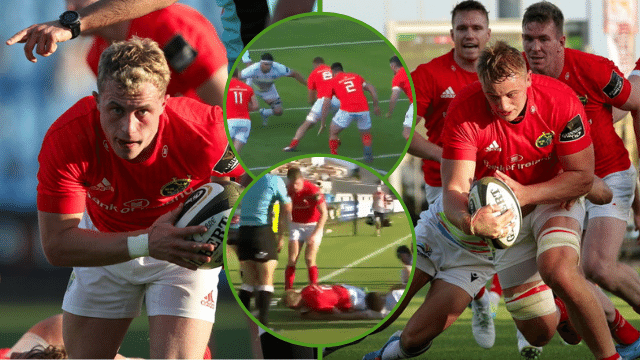