France hammered Italy 50-10 in Rome on the opening day of the Six Nations of Saturday. It was Italy's 28th consecutive defeat in the tournament.

Speaking on BBC, former Wales and Lions captain Sam Warburton called for there to be promotion/relegation playoff game in the Six Nations.

Italy's #SixNations struggles continued yesterday, as they were handed a heavy defeat by France.

So, is it time that promotion and relegation was seriously considered for the championship?#bbcrugby pic.twitter.com/u6MQkkj71A

"There's got to be a change," said Warburton.

"It's not just throwing your toys out of the pram off one game. For quite a few years now Italy haven't really been competitive. I personally think there's got to be promotion and relegation in the Six Nations.

"Say if it was last year, Georgia, who won the second tier competition... We can't keep putting a glass ceiling on these teams in Europe because otherwise how do we know what the growth in Europe is going to be like?

"If that's the case, Italy come bottom and Georgia win, in the next international window, Georgia should travel to Italy - so Italy still get home advantage and a chance to stay in the competition - for a playoff game. That would get some pretty good TV viewings, I'm sure. I'd like to see that.

"I think enough is enough. Italy just don't have the strength in depth from a player pool point of view. They're just not good enough to compete at this level right now."

"It was far too easy for France. We're sitting here cringing.

"Even when we've beaten Italy in the past, they've always made it a game. You had to go and beat them, and they were tough defensively. They were physical. They made it very difficult for you. They kept hold of possession and kept it away from you." 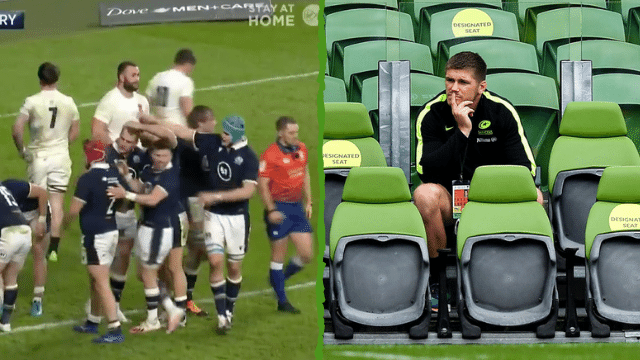 Rugby
1 year ago
By Gary Connaughton
The Crazy Shooting Scandal That Engulfed Georgian Rugby This Year
Rugby
1 year ago
By PJ Browne
The Ireland Team To Play Georgia On Sunday Has Been Named
Rugby
3 years ago
By Eoin Lyons
Ireland U20s End Miserable World Cup With Shock Defeat To Georgia
Popular on Balls
GAA
1 day ago
By PJ Browne
The Draw Has Been Made For Tailteann Cup Opening Rounds
GAA
2 days ago
By PJ Browne
Donal Óg Cusack Defends Dublin Hurlers After John Mullane Criticism
The Rewind
3 days ago
By Eoin Harrington
Watch: Brilliant Dermot Morgan Dublin Segment From 'The Travel Show' Resurfaces
Football
3 days ago
By Eoin Harrington
Alan Shearer Says Roy Keane "Ran Away" From Him After Famous Clash