Leinster hooker Sean Cronin was full of praise for both Rob Herring and Ronán Kelleher after a hard-fought win for Ireland against Scotland.

The 34-year old was the special guest on Balls’s post-match show The Takeaway With Chicago Town, alongside former Ulster and Ireland centre Darren Cave.

Paul O’Connell’s influence on the Irish line-out has been well-documented, but Cronin thinks that Andy Farrell’s team selection also deserves praise – as well as the performances of both Irish hookers.

Farrell picked Rob Herring from the start and subbed Ronán Kelleher in with 17 minutes to go – a move Cronin thought worked well.

I thought Rob Herring had a really good game – scrummed well, threw well. He put a lot of pressure on the breakdown, won a penalty at one stage.

And then when you can bring a player on of Ronan [Kelleher]’s quality with his carrying and his tackle work, like you said, I think Andy Farrell got that right – bringing the energy from the bench when you have the opportunity.

I thought both guys went really well today. I think we dismantled the Scottish lineout which starved them of first phase possession.

We dominated the breakdown and the scrum went pretty well as well – they’re all key areas of the game where if you’re getting the upper hand, you’re ultimately going to win test matches and you’re going to win close games.

Kelleher’s quality off the bench was plain to see in the post-match stats. In just 17 minutes, he managed four carries for 20 metres and six tackles.

It was a hard-fought win for Ireland, but Cronin felt that the nature of the win spoke well of the team’s qualities, despite the lack of exciting attacking play.

But test matches are there to be won, there was a lot of pressure on the team to go over there and get a result and that’s what they did.”

Cronin and Cave were both in agreement that Ireland will have to be ready for another tough game against England next week, with the Leinster player saying Ireland will have to focus on driving home their advantages from winning positions and being “a little bit smarter”.

Though Cronin acknowledged Ireland “let Scotland back into the game”, he felt that there was the right balance of positives and negatives to take into next weekend’s game.

It was a massive win in terms of the pressure they’re under. Lot of positives to take, lot of work-ons as well.

Though it was hard-fought, Ireland’s win at Murrayfield was deserved and the stage is set for a big final game against England at the Aviva Stadium next Saturday. 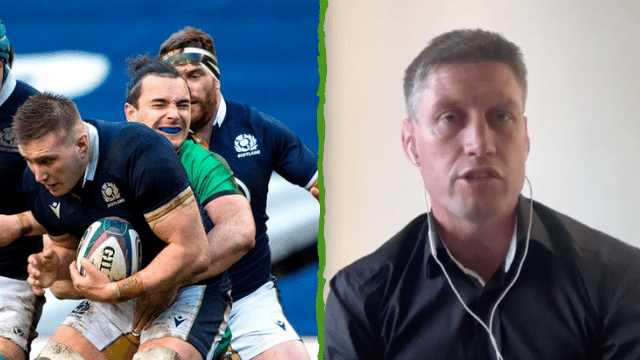