'I'd Say I Put My Hand Up For Lions Selection': Seán O'Brien Has His Eye On New Zealand

Seán O'Brien sits back in his chair a confident man, arms the girth of a normal man's thighs stretched behind his head, a satisfied smile betraying his typically unbending demeanour.

The Six Nations' curtain call brought with it a vengeful end to England's world record-equalling unbeaten streak, and the Leinster back row feels he stormed back into Lions contention with a marauding display versus Wasps - the type we've grown accustomed to where 'The Tullow Tank' is concerned, but haven't seen with as much regularity during a particularly injury-marred season.

He's been chosen as the face of Tipp24's Irish launch, but is more than willing to reflect on a potentially season-defining victory at the weekend.

"Flying, so they are," he says. Not of Leinster, but of his local side Tullow RFC, who overcame Ashbourne in Sunday's Towns Cup semi-final.

O'Brien coaches Tullow in his spare time, and was in Kildare to roar Richie Nichols over the line for a last-play score at Edenderry RFC's headquarters.

They made hard work of it but got there in the end, anyway, thankfully.

I'm doing a bit with them. Doing a bit of defence and some work with the forwards. It was a good win for them.

I'd say they're so used to seeing me down there they don't blink an eye. I've been involved in the club my whole life, so I don't think it's new for them. Even the younger guys coming up, they see me all the time there on Tuesdays. Maybe they're a bit spoilt having me there all the time! 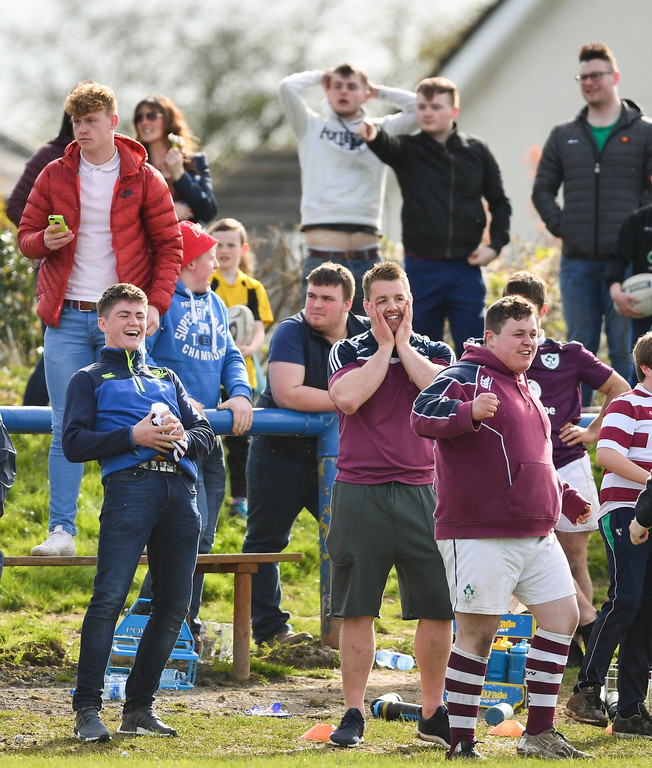 At least equally important was Leinster's frequently spectacular and ultimately emphatic victory over cash-rich London Wasps at Landsdowne Road just a day prior. It struck as somewhat of a 50:50 clash in the run-up, the Premiership table-toppers visiting their Pro12 equivalent in red-hot form. Their cavalier 'attack from anywhere' approach, however, was quickly stricken down by an oncoming blue plague.

For the second time this season, Wasps were stung on Irish soil, while for the first time this calendar year, O'Brien produced a display worthy of comparison to the SOB of old, injury woes seemingly finally behind him.

A timely return to his near-best, then, with Warren Gatland's Lions squad due to be announced on April 19th.

I'd say I put my hand up for selection, definitely. I'd like to think so, anyway. It's something probably that you don't think about that much, but all I want to do is keep playing and stay fit. If I'm playing really well the rest of it looks after itself.

We'll know in a few weeks exactly who's selected and who's not.

The idea that O'Brien wouldn't actively be assessing his Lions prospects is frankly unusual, particularly when he describes the potential opportunity as "massive." Given the 30-year-old's injury profile, it might strike as unlikely that he'll be in South Africa in 2021. This summer might prove his last chance to rejoin the pantheon of Irish and Lions greats, having already won a Test series versus Australia in 2013.

Brian O'Driscoll has spearheaded a vocal campaign for the Carlow man's inclusion, and O'Brien admits that - despite tunnel vision where Leinster duties are concerned - the mind can wander, at least fleetingly, towards Gatland's decision.

Maybe in the back of your mind you'd have that there. But, you know, if the team is performing well, you can express yourself a lot more as an individual. And that's what happened at the weekend - we had a really good team performance. As a result of that, some of us played very well.

But yeah, Lions selection is in the back of your mind. You would have little thoughts during the week of who you're coming up against and the permutations of not playing well.

The little bit of fear drives you on.

"There's no phonecall," he laughs, recalling his Lions summons four summers ago. "You watch it like everyone else on the tv, and that's the way it works."

That afternoon, O'Brien sat on his own at home, glued to his television. He admits he was bricking it, and he'll be in the same frame of mind in a fortnight's time. For now, he's completed his part of the bargain.

So too have Leinster, and indeed their mates to the south, keeping alive the dream of an All-Ireland final in Murrayfield.

It would be unbelievable if it worked out that way, there's no doubt about that. It'd be a great occasion - supporters over there in their droves. It'd be special to have two Irish teams in the final.

[Munster] had a great win as well at the weekend so, who knows? It could work out that way.

While the Munster-Leinster rivalry hasn't remotely subsided when red and blue collide on the field, O'Brien admits the playing contingents from both provinces are in frequent conversation with each other, friendships forged on international duty and otherwise.

He and Munster captain Peter O'Mahony might well have done battle for the same seat on the plane to New Zealand over the weekend, albeit 200 kilometres apart. The pair remain close off the field, however, and there'll be nothing but hearty congrats exchanged on Whatsapp should one be selected and not the other.

I speak to Pete a good bit, I'd be chatting away to him.

Is he all right after the weekend?

Jesus, I dunno. I think he only came off with a dead leg or something, did he? I don't think it was anything major. He'll be grand.

Regardless of what transpires live on Sky Sports on April 19th, both men will already be feverishly focused on the following weekend.

Leinster and Munster head into their Champions Cup semis as underdogs, perhaps, such is the form of their respective opposition in Clermont and Saracens, but O'Brien feels the very concept of such a tag - from the players' perspective, at least - is moot when you reach the last four.

For one thing, Leinster have a wealth of experience to draw from when it comes to winning in France, and the barreling back row maintains his own nous and that of his more senior teammates might instil similar belief in the Blues' form young guns.

Underdogs? It doesn't matter what you're perceived as. You've no second chance at it so you have to perform every opportunity you get. I don't think we'll be looking at who's underdog or who's favourites. It doesn't matter where you are - whether you're home or away - at this stage of the competition. You have to beat them all anyway.

Obviously there's a lot of us who've been involved in some huge games over there, and that will bring a lot of experience to the table. And we'll speak about that - we'll make sure everyone knows what we're going over there to do. That'll help some of those younger guys as well that are in the squad, and make them understand what it's going to take to win over there.

It'll be great, so it will. A great occasion for us, and great for the club to be back at that stage.

Having swatted a pre-tournament favourite in Wasps to one side at the Aviva, there lingers a sense that Ireland has become a hoodoo destination for English teams, perhaps akin to Ireland's own international failings in France for over a decade in the Six Nations.

It was, of course, Dublin where England's undefeated run came to a thunderous close three weeks ago - this despite Ireland having already lost two games in the Six Nations.

Such a victory evoked its own questions of Ireland, with some theorising that Joe Schmidt's side require 'the emotion of the occasion' to go hell for leather with the world's best teams. Written off, they tore into England with a similar ferocity to that with which they threw at the All Blacks in November. Sandwiched between both monumental performances, however, were massively disappointing defeats to Scotland and Wales - games which Ireland frankly should have won.

O'Brien reckons we're all overthinking their defeats, and that the 'emotion' theory is a load of nonsense.

I wouldn't say it's that at all. We got caught on the hop in Scotland - we didn't start the game well. We were chasing and put ourselves back into a place to win the game, and then we give away a few stupid penalties.

The Welsh game was a bruising affair as well. There was a few bits and pieces that we were a bit sloppy on which could have went either way.

So we had to put in a performance in the last game and make sure we left ourselves in the best place possible. And you take a lot of positives out of that for the next time you pull on a green jersey.

England's record didn't come into it. We were just looking to put on the best performance possible because we'd let ourselves down the week before. That's all it was about. Of course [you want to stop them]. That's what you want to every year, really, when you go out, you know? Yeah, the world record and all that stuff... But it nearly goes over your head a little bit, all that kind of stuff. When you're preparing for a Test match, everyone else is talking about that stuff but not the players themselves. It's a bit strange.

But when you look back on it then, you kind of go, 'Actually, yeah, that probably was a factor in it too'.

Such a realisation tends to manifest itself when O'Brien is back home after games, reflecting on his performance and that of his team.

He likes to warm down on his own, rather than hop in an ice bath at the stadium or training ground. This approach has seen him develop a highly unusual post-game quirk, and one which you might have seen on his social media channels. In need of physical recovery, he hops into a particular section of his local river.

It's kind of like a man-made tank, so it is, on the edge of the river at home. Water flows through the middle of it, so rather than filling up an ice bath I get into that every time I'm home. I feel great after it.

I'm just making sure I tick all the boxes recovery-wise after the games!

He'll be hoping he ticked enough of them on Saturday to test the natural springs of New Zealand this summer.

O'Brien was speaking at the launch of Tipp24, which has launched a dedicated new Irish service giving consumers here access to an unprecedented range of lotteries and games via its website www.Tipp24.ie.

Rugby
10 months ago
By Michael McCarthy
Quiz: Name Every Full Irish Rugby International Of The 2010s
Previous Next

Rugby
2 months ago
By Michael McCarthy
Ireland's Best Novembers And How They Fared In The Following Six Nations
Gaming
3 months ago
By Balls Team
Remembering The Monster That Was 99 Overall Brian O'Driscoll In EA Sports Rugby 06
Rugby
10 months ago
By Michael McCarthy
Quiz: Name Every Full Irish Rugby International Of The 2010s
Popular on Balls
Basketball
1 day ago
By Eoin Harrington
Kieran Donaghy And Tralee Warriors Claim National Basketball Cup Title In Tallaght
Football
1 day ago
By Gary Connaughton
Carragher Reveals Unhappy Instagram Message From Lionel Messi After MNF Comments
The Rewind
1 day ago
By Gary Connaughton
Quiz: From Which Irish County Did This Company/Product Originate?
Football
2 days ago
By Jonathan Byrne
Women Footballers Call Out 'Embarrassing' Sun 'Exclusive'