Shane O'Leary always wanted to be a professional rugby player. It is an aspiration that has taken him from Ballina to Young Munster, to Grenoble, to Connacht, to Canada and now to Nottingham.

His first exposure to the paid ranks was with Munster's academy and u20s, but after missing out on a contract and an Irish u20 call-up, a burgeoning career began to falter. However, O'Leary got creative and persevered.

Speaking to Balls.ie's rugby show, World In Union, O'Leary explains how his yearning for an international career took him to North America: "When I didn’t make Irish 20s back in 2013, I enquired about playing with the Canadian under 20s as my Mam was born in New Brunswick. So I emailed the coach at the time, Mike Shelley. He brought me over and I got stuck in there."

Soon after that, he signed an academy deal with Top 14 side Grenoble, and after a season in France he returned for three years with Connacht. When his time in the west of Ireland ended he once again returned to Canada and got his just reward last week when they beat Germany to qualify for the 2019 World Cup.

I was looking for a new club and decided I may as well crack on with the international scene as the coach, Mark Anscombe, was keen to get me over. I went over and played. (I've) 10 caps now and loving every one of them.

O'Leary is one of several Irish plying their international trade abroad. Former Blackrock and Connacht out-half AJ MacGinty and Greystones man Dylan Fawsitt are just some of the names playing for the United States right now. It means the North American derby can sometimes feel like an AIL tie: "It is funny, sometimes you are listening to accents and it sounds like a club game at home rather than an international in Halifax and Nova Scotia!"

The is a curious phenomenon that dominates how Ireland consider players playing abroad. Generally, it is framed in relation to the senior team. How big a loss is it? How do we keep players here? But there is another cohort of talented sportspeople who exist outside of this bracket.

These are the players forced, not seduced, abroad. Players with the courage to embrace the unknown. Players like Shane O'Leary, Duncan Casey and Jerry Sexton, who initially joined foreign clubs to survive and now thrive.

It was the club game, not the schools' system, that produced Shane O'Leary, and he is quick to urge Irish rugby to recognise the talent there.

"When I got back from Canada 20s, I went back to the Cookies (Young Munster) and started playing with them. I didn’t get any academy contract at home. I was always going to play professional rugby in my own head. It didn’t matter where I had to go."

I rate the club scene highly. The club programme has been building that exposure. I think it has got a good reaction. There are a lot of lads in the league who could step up to professional rugby. Every year lads make that step up, look at Neil Cronin last year who has been really impressive. 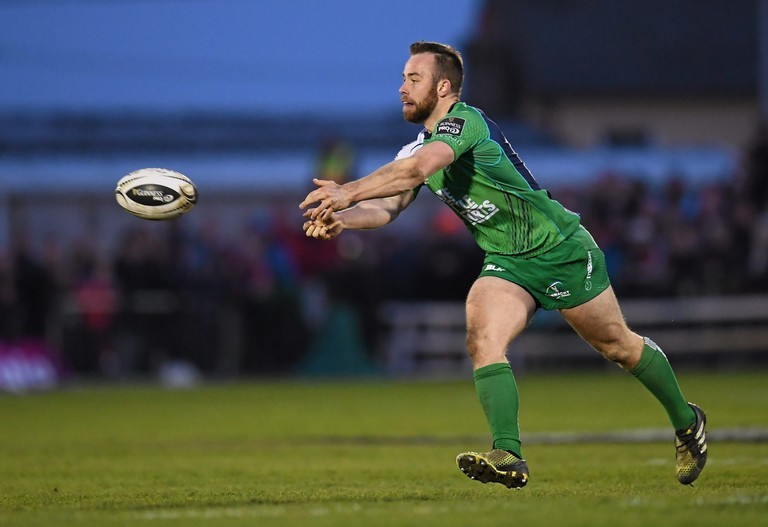 One of the sport's greatest underdog stories saw Connacht make history with Pro12 success in 2016. O'Leary was a significant part of that and played in both the semi-final and final. An injury to Tiernan O'Halloran saw the out-half forced to play in the unfamiliar position of winger, but once again it was a situation he embraced: "I would have played fuckin' tighthead in that game if they wanted me to!"

Now playing his rugby in the English Championship with Nottingham, that extraordinary triumph is something that stands with Shane O'Leary to this day.

One of the biggest ones (learnings) was you got to back yourself. Even if you are not playing well. Confidence can carry you through. It is a big thing for me. if I have missed a few kicks in a row or am not playing well, I try and think back because I know I can do it. I've done it in training and past games. Water off a ducks back, you have to drop it and get on with it.

It is something he hopes to carry with him to the 2019 World Cup, as Canada prepare for the formidable challenge of a pool containing South Africa and New Zealand.

"Obviously, it is a pretty difficult group. But this is what you play for. You want to play against the best players in the world. I want to start at 10 and line up against Beauden Barrett. I want Sonny Bill (Williams) to run at me a couple of times. It's what you play for. As a kid, I would have always dreamt of going to a World Cup. Hopefully, I will be on that plane when it travels and I am absolutely looking forward to it."

You can watch the full interview here, or listen to it here.

SEE ALSO: Six Coaches Who Are Important For Irish Rugby In 2019

Rugby
2 weeks ago
By Emmet Bradshaw
Watch: Connacht Use Late Captain's Challenge To Win Cracker At Ulster
Rugby
3 months ago
By PJ Browne
Andy Friend Signs New Deal To Stay On As Connacht Head Coach
GAA
4 months ago
By Maurice Brosnan
Inside The Most Dramatic Declines In Irish Sport
Previous Next