Should There Really Be So Many Ireland Players In RTÉ's Team Of The Six Nations?

Daire O'Brien, Eddie O'Sullivan and Shane Horgan sat down after England's Grand Slam victory in Paris to name their Six Nations team of the tournament, and the prominence of the colour green may well raise a few eyebrows.

Or, perhaps more so, the absence of Welsh red aside from the reinvigorated freight train that was George North, who ended his try drought and then some.

Here's the lads' team in full: 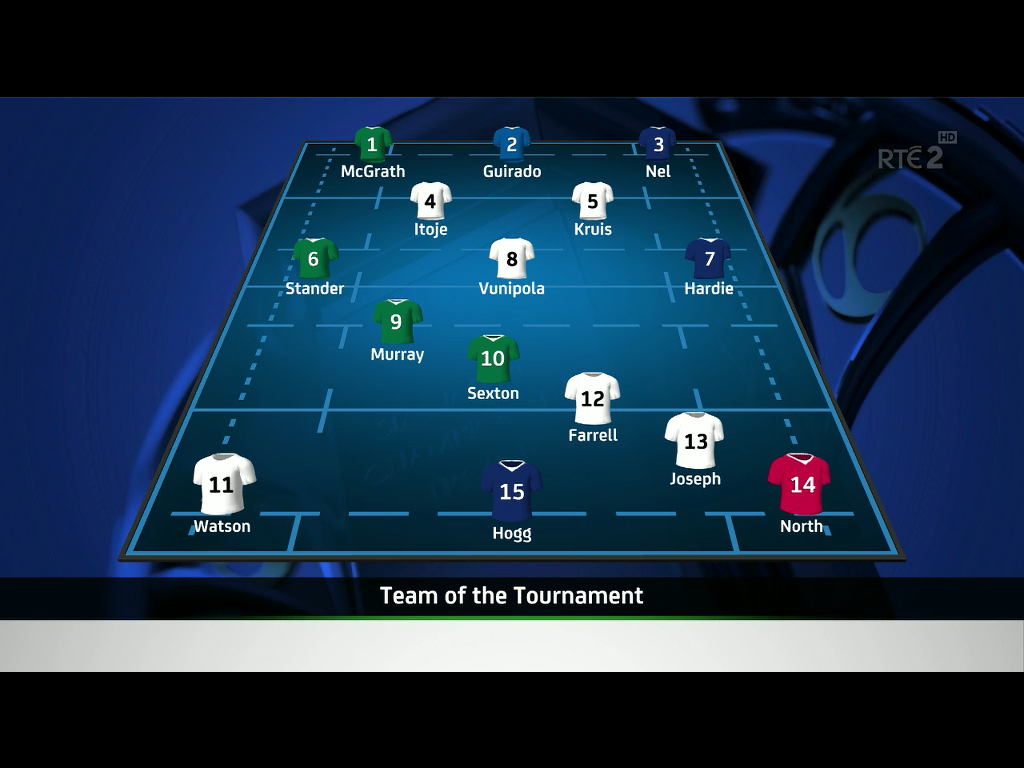 At first glance it seems odd to have four Ireland players compared to the single Welsh representative considering Ireland's season, and the fact that they finished in third place behind Wales.

If he watches RTÉ, Welsh scrum-half Gareth Davies can certainly consider himself unfortunate to miss out on a place ahead of Conor Murray, whose three tournament tries and admittedly fine performances versus Italy and Scotland surely mask the fact that his form as a whole was patchy.

In his first Six Nations, Davies continued his five-try form from the Rugby World Cup with two more, one of which was a 50-yard dash home against the Scots:

You get the impression we'll hear a lot more of Jonny Sexton's battle with Dan Biggar this time next year when the Lions tour rolls around, but on the basis of this year's championship, you could make the argument for either man edging it. We'd lean towards Biggar's form over the tournament as a whole, but opting for Sexton is no major crime.

The lads in the studio, however, almost lost the arse when making a case for Robbie Henshaw's inclusion ahead of Owen Farrell at inside centre.

You could put your mortgage on Henshaw becoming a more effective player than the England 12 as the pair's careers progress, but - regardless of Irish people's weird ill-feelings towards Farrell - Henshaw finished the tournament tryless and was found wanting when Maxime Médard crossed the whitewash in Paris last month. But that's not to suggest the Leinster-bound center had a poor tournament; he once again proved himself one of the most exciting prospects in rugby, and also broke out this incredible handshake with Simon Zebo.

Thankfully, O'Sullivan and Horgan went with Farrell, but spare a thought for Jamie Roberts who had one of his better tournaments for Wales, finishing with two tries and a couple of outstanding performances - not least in Dublin.

We're not necessarily criticising RTÉ's final selection, but just wondering aloud if it's entirely fair. It would seem that the inclusions of Davies for Murray and perhaps even Biggar for Sexton would probably offer a fairer reflection of this year's tournament.

What changes would you make to RTÉ's team, if any? And who was your player of the tournament overall?