If there has been one theme running through the Lions' tour to South Africa thus far, it is the discussion around officiating.

The coaching teams from both sides have been banging on about refereeing decisions non-stop, but it has ratcheted up even further in recent days.

Yesterday, Rassie Erasmus would release a frankly bizarre hour long video in which he would launch a tirade on Nic Berry, who had refereed the first test against the Lions.

His accusations included he was affected by a narrative created by the Lions in the media that South Africa were too physical, as well as claiming his captain Siya Kolisi was not treated in the same manner as his counterpart Alun Wyn Jones.

Erasmus has been known to use tactics such as this in the past, but Kolisi himself has now joined in on the action.

Speaking at a press conference ahead of tomorrow's second test, the 30-year old claimed he did not feel 'respected' by the referee last week.

I didn’t feel respected in the first Test.

I didn't feel I was given a fair opportunity or was respected at all.

When asked to clarify on his remarks, he simply pointed back to the video Erasmus released yesterday.

Of course, this all seems to be a ploy to pile the pressure on the officials ahead of the second test.

The accusations also seem to be largely baseless.

The ever brilliant 'Squidge Rugby' pointed out how off the wall Erasmus' video really was, breaking down every single incident in the game in search of an infringement.

Rassie says "It's almost like [Berry] is laughing at Siya", not that he *did* laugh at him. Suddenly a legion are outraged a referee mocked Kolisi. It didn't happen.

O'Keefe (Saturday's ref) won't be able to avoid this. Come Test 2, he'll need to hang on every word Kolisi says.

The South Africans know exactly what they're doing here.

It remains to be seen if the officials will be affected, but there will be certainly be plenty of scrutiny on every decision they make from both sides after this buildup to the test. 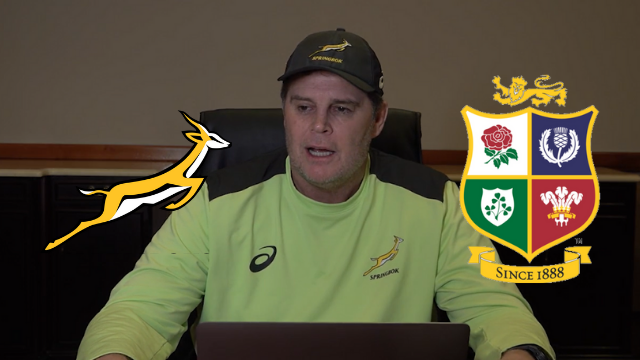