With all of the Lions' warmup games now out of the way, the debate over who should start the first test against South Africa will now kick into overdrive.

The XV is very difficult to call at the moment, with few players nailed on for a place in the side at this stage.

Some certainly helped their chances during this evening's 49-3 over the Stormers, a game in which four Irish players started. One of them may have put himself in a very strong position ahead of next weekend.

Speaking on Sky Sports after the game, Maggie Alphonsi said she believed that Tadhg Beirne has to start in the back row against South Africa based on his performances in the tour up to this point.

I think based on what we saw on Wednesday Curry is nailed on (for the back row)...

I know the opposition wasn't much today but I thought Beirne was very good. He is one of those players you call 'mr consistent', he does everything well and is always in the right place.

The reason why he's so good as a number six is because he offers you a line-out option. He also is very good at the breakdown.

We talk about Luke Cowen-Dickie being good in that area, but you need a flanker that is able to do that.

He had 12 carries, so he carries really well, looks for the offloads. Some of the tries that were scored today, he was involved all the time. If he makes a pass, he works hard to try and get back on the ball and make that offload again.

For me, at number six you want that person to do all the dirty work, be aggressive and strong, but at the same time offer you the option as a link play.

He would be my six now and I would have Curry at seven.

That is an opinion shared by Ian McGeehan.

The former Lions coach said that Beirne has been the most consistent player in his position since the turn of the year.

Tadhg Beirne for me has been the one that has been so consistent. He was good in the Six Nations and has been good for the Lions every time he has played.

You need that big six, particularly for the first hour of the first test at least. I think he has done everything. I have been really impressed with him I have to say.

Beirne would have been an unlikely Lions test started 12 months ago, but you certainly couldn't argue against his inclusion after his stellar from since then.

As for the back three, Ronan O'Gara thinks there is a clear trio emerging.

Nailed on for me are Liam Williams, but I don't know where to play him.

I think you need a goal-kicker from distance because test rugby is very different in that if you have a guy that can give you six points from two penalties that 50+ metres, it is such an asset to the forwards.

I think Liam Williams, Elliot Daly, and Anthony Watson will be the back three, but I don't know where to play them.

It will be interesting to see what way Warren Gatland goes ahead of next week's fixture. 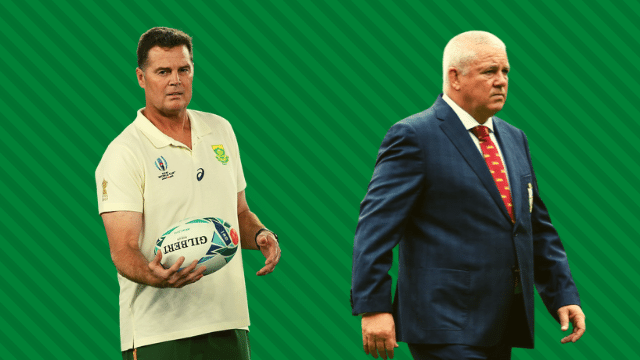 Rugby
3 months ago
By Colman Stanley
Mike Ruddock On The Greatness He Saw In Tadhg Beirne When Few Others Believed In Him
Rugby
10 months ago
By Michael McCarthy
What Irish Lions Will Warren Gatland Pick For The First Test?
Rugby
11 months ago
By Donny Mahoney
Making The Case For Seven Irish Players To Start The First Lions Test
Previous Next

Rugby
3 months ago
By Colman Stanley
Mike Ruddock On The Greatness He Saw In Tadhg Beirne When Few Others Believed In Him
Rugby
10 months ago
By Michael McCarthy
What Irish Lions Will Warren Gatland Pick For The First Test?
Rugby
11 months ago
By Donny Mahoney
Making The Case For Seven Irish Players To Start The First Lions Test
Popular on Balls
Football
14 hours ago
By Gary Connaughton
Watch: Neil Lennon Had Furious Reaction To Being Sent Off In Cypriot Cup Final
Football
11 hours ago
By Gary Connaughton
Watch: Remarkable Fan Footage Emerges Of Manchester United's Famous 1999 Nou Camp Comeback
Football
15 hours ago
By Gary Connaughton
Frank Lampard Reveals Seamus Coleman's Huge Role In Turning Everton's Season Around
GAA
2 days ago
By Luke Delaney
Jackie Tyrrell Baffled By Brian Cody Selection Decision In Wexford Defeat