So the Ireland gameplan hasn't exactly been executed to perfection. The victory over Scotland was heartening, but since Japan's surprise victory in Shizuoka Joe Schmidt has struggled to lead the ship back to safer water.

Heading into the final game of their pool on Saturday we remain just as clueless as we were in the immediate aftermath of that shock result. A 35-point win over Russia was a step in the right direction but it wasn't exactly the great leap forward we were hoping for. The Irish performance was, alas, still riddled with shortcomings.

However, Stephen Ferris has noticed a worrying statistic which may hold the key to Ireland getting their groove back should Schmidt rectify the issue. That may be easier said than done.

Speaking to Balls.ie on The Buildup podcast, the former back-row claims the metres Ireland gain per carry is far short of where it should be.

"Ireland, on average, have around 135 carries per game and over those 135 carries they're averaging 433 metres per game," explained Ferris.

The only teams below that are, on average, Russia, USA, Tonga and Samoa. Then, Ireland are next.

So all these carries that we're making we're not actually making any ground. And these other teams that I've mention are the only teams behind us.

But if I go back to the gameplan, I feel if Ireland go on this multi-phase [approach] - seven, eight, nine, ten phases - that will play into their hands because this Samoa team will tire and they won't be able to keep up with that. And it doesn't matter if they're making one-and-a-half metres per carry that will burn them out.

Ferris also made an interesting prediction ahead of the other game in the pool on Sunday between Japan and Scotland. The threat of Typhoon Hagibis means the game could yet be cancelled, meaning Japan would sail through to the quarter-finals with Scotland likely to be knocked out. 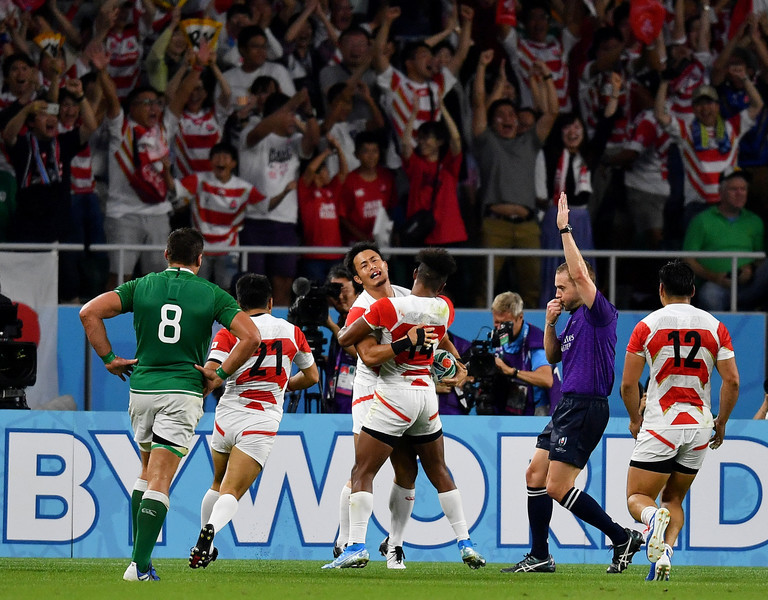 Regardless of adverse weather conditions making their way to the country the former player, who represented Ireland at two World Cups, believes the host nation could topple yet another home nation.

[Scotland] have a really quick turnaround to play Japan. Japan have, I think it is, eight days rest from their last game to the Scottish game. For me, that is huge - absolutely huge.

You look at the games that have went by. Australia have played Fiji - it was a pretty tight game for the most part - and four days later Fiji had to play and they get turned over by Uruguay.

These really, really quick turnaround have a massive impact on the level of performance. For me, to hear that Scotland are favourites, considering  the way firstly Japan are playing but also the quick turnaround, I'd be backing Japan all day long.

You can listen to the full podcast - which also includes Kevin Doyle's preview of the Republic of Ireland's clash with Georgia - here or by searching The Buildup on Balls.ie on all good podcast apps.

Rugby
4 months ago
By PJ Browne
'Getting That First Kick Vs England Was Huge. 8 Years Ago I Couldn’t Kick For My AIL Team'
Previous Next

Rugby
2 weeks ago
By Paul Moore
RTÉ And Channel 4 Will Have Free To Air Coverage Of Ireland's Matches In November & December
Rugby
2 months ago
By Mark Farrelly
James Lowe Confirms New Leinster Deal With World Cup In His Sights
Rugby
4 months ago
By PJ Browne
'Getting That First Kick Vs England Was Huge. 8 Years Ago I Couldn’t Kick For My AIL Team'
Popular on Balls
The Rewind
10 hours ago
By Mark Farrelly
A Beginner's Guide On How To Speak Like A Cavan Person
18