'I Was Playing The Best Rugby Of My Career. I Felt That I’d A Lot More To Offer'

In 2009, the world was at Stephen Ferris' feet. Ulster and Ireland had a 23-year-old beast in the backrow, and he was only getting better. An ever present in Ireland's Grand Slam team, the next step was being selected in for the Lions tour of South Africa, and going on to cement his name as a world figure by dominating the world champions on their own turf.

It was looking likely too. Ferris's first couple of games in red produced displays that suggested he had a serious chance of bolting into Ian McGeechan's test squad. Cue a freak training ground injury, and that was that.

Four years later, the Lions went to Australia while Ferris was recovering from an ankle injury that would keep him out for 15 months and ultimately end his career at 28. This was his one taste of The Lions.

Of course, it wasn't always certain that he would be picked for the squad. While Ireland had won the Grand Slam, Ferris was relatively inexperienced, having played just 13 times for Ireland, and had only really established himself in the team the previous November. Many pundits thought if he was picked, his physicality would be perfectly suited to South Africa and he would play his way up the pecking order, but it wasn't certain Ian McGeechan would see things the same way.

It was predominantly Welsh and Irish that were on that tour. There was very few English and even less Scotsmen. Once you won that Grand Slam and you were on top of the tree and you were playing really well of course you thought about it. Of course you were in that shop window.

I was a starter for Ireland. I wasn’t somebody that was coming in and out of the team. I started all 5 games during the 2009 6 nations. I suppose I realised I had a chance but Ulster weren’t particularly doing that well.

I’d some fantastic games and some rubbish games and I can remember we played Cardiff in Belfast. I think it was maybe the penultimate game before the Lions squad was selected, and Andy Powell of course was playing for Cardiff. Andy Powell played amazing and I can remember going into the changing room after. “We just played Andy Powell onto the plane for the Lions." If he had a bad game he might not have made the tour and Tom Croft might have been in ahead of him, before Quinny obviously (was suspended) with the eye gouging of Leo and that.

So its very fine margins but of course it’s in the back of your head especially when you’ve had the success in the Six Nations with your country.

Ferris maintains his form on the tour wasn't a fluke. He had pushed himself to be in the best shape of his life and was determined to make an impact in South Africa.

“I was hugely disappointed at the time for Rory Best because he was a fellow Ulster man, he didn’t make the cut but then there was sort of a selfish side of me that just goes, ‘you know what? This isn’t about anyone else apart from you here getting on this team.’ I put in so many hours on the training pitch. My preseason started at the end of the season, if that makes sense.

“Johnny [Davis] and I pushed ourselves to the limits. It was the fittest I’d ever been. I knew I was hitting the ground running that I almost felt that I was half a step of the other lads because I pushed myself so hard. Maybe I did need to be that half a step ahead to give myself a chance. I think I proved that I was that little bit ahead in the couple of games that I got given the opportunity to wear the red jersey of the British & Irish Lions."

There was a lot of competition for test places in the backrow, but Ferris felt good about getting a spot on the blindside. In a weird twist of fortune, bad luck for an Irish teammate was also something that worked in his favour .

In the lead-up to that tour I never thought I was going over there to be a mid-weeker or to be making up numbers. It was just a time where I knew there were a couple of lads that were maybe just ahead of me but in saying that they were Number 8 and Number 7, so I felt like obviously the Quinny thing, he’ll hate me for saying this, it probably played into my hands a little bit as well with a new face coming into the squad. Tom Croft had to play catch up.

Alan Quinlan had been suspended for a gouging incident on Leo Cullen in a Leinster Munster game at the end of the season. It cost him his Lions tour. It raises an interesting question. You're there as a team, but you're also competing in a large squad for very limited test spots. How does that competitiveness merge with team unity?

It was only on the field that I felt there was real competitiveness. That was it. Only on the training pitch, only in live mauls, scrummaging, physical contact, a little bit in the gym. But as soon as the whistle was blown at the end of training we all just seemed to come together.

It was amazing. I remember Pennyhill Park and I was standing around in a bar with Mike Phillips, Lee Byrne, James Hook and even the strength and conditioning lads, having a few beers and having the craic. It was just brilliant, there was no shoulders puffed out, 'I’m going to take your place'. None of this.

The likes of Joe Worsley, who was getting to the latter end of his career, he was someone who put his arm around me and was taking me under his wing. “Stevie, do you want to do ten minutes low tackling drills after training?”

We were all helping each other out and trying to make each other better. I think if you can get that in a squad it goes a long way to being successful. You obviously watched the Sam Burgess stuff with George Ford not talking to him and look how their World Cup ended up. I think you need a happy camp and ours was certainly very happy.

Unfortunately, after a particularly brilliant display against the Free State Cheetahs, in which Ferris scored a brilliant try and set up Keith Earls for another in a very tight game, it was all over.

"I felt at the top of my powers and unfortunately just a training ground incident. It could happen any single day in training, I just tweaked my MCL and that was it over."

An MCL. A four to six week injury. If it had come sooner, he made have made the Test series. Ferris held out hope for a while, even hanging around for the first test, but there was no way back. Watching the first test, a cracker in Durban where the Lions staged a late comeback but were beaten by five points, wasn't the most pleasant experience for the flanker. He should have been out there.

I love matching fire with fire and certainly in that first test the conditions were absolutely perfect. The atmosphere was electric. I was high up watching it. Bird’s eye view.

You always have this feeling could I have made a bit of a difference? Could I have put in a tackle that dislodged the ball to set up a try or to kick three points? I always have these things running around in my head.

Maybe I wouldn’t. Would I have been on the end of the ball that Brian O'Driscoll offloaded to Tom Croft to get one of the tries? I might not have been there. He was there.

So there’s all these outcomes that could have happened but I definitely feel that I was playing the best rugby of my career. I was the fittest I’d ever been and I felt that I’d a lot more to offer. 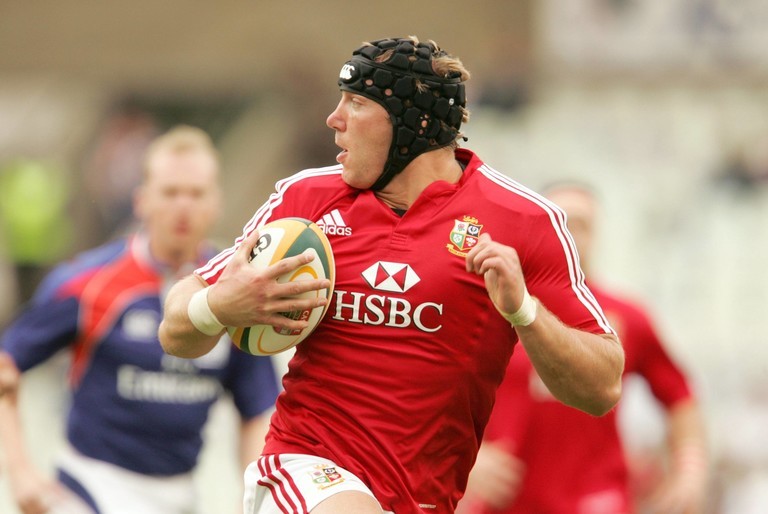 Not one to live with regrets, Ferris looks back on his time with the squad with nothing but positivity.

Honestly guys it was the best time in my life. It was amazing. It was so fun. You talk about teams and successful teams and everything else. It was just a great place to be with good lads.

My Lions number is 768. 7,6,8. I played all three positions. No 7, No 6, No 8. Of course the middle number is number 6. It was just really cool to have. I didn’t even know what my Lions number was until I got it posted through.

The memories that I have with the lads. With Andy Powell. The fitness staff. Lee Byrne, Hooky, Tommy. Standing in night clubs with their tops off. Swinging them round and round. Smoking a Marlboro Light, then getting up for training the next day.

The Lions would lose the series in Pretoria a week later in one of the best Lions test matches ever played. Seven Irish players started the game with another coming off the bench. Morné Steyn kicked a winning penalty with 81 minutes played. Would things have been differently if an Ulster man had made it an all-Irish backrow? We'll never know.