Tadhg Leader Is Trying To Make It As An NFL Kicker

One afternoon last spring, at the height of the pandemic, Tadhg Leader had a brainwave. Like many of us, the Galwayman was sitting around his house in Massachusetts, bored. Leader, who plays outhalf with the New England Free Jacks in Major League Rugby, had always been a phenomenal kicker of a rugby ball and he decided that day he wanted to try kicking American footballs.

The thought of playing the sport had been at the back of Leader's mind since he arrived in the US in 2015. When he was on a rugby scholarship at Lindenwood University near St Louis in 2015, he'd do some kicking with football team, who trained nearby.

'The football guys were like 'shit, you can kick a ball', Leader says.

Leader is also now a coach of a rugby team outside Boston known as the South Shore Anchors. One of his players coached a high school football team in the area. Covid has paused all rugby activity in America, and Leader felt it was finally time to try this out.

'I rang him up and said 'can I kick a few footballs?'

Leader soon found out he hadn't lost the gift. His technique might have been starkly different from other kickers and the flights of his kicks unlike anything you'd ever see in the NFL, but the end result was the same: they split the uprights from distance.

'Back yourself and enjoy the journey'

Former Connacht player @TadhgLeader is trying to make it as a kicker in the NFL.

Big interview with Tadhg coming up on https://t.co/Ymmo2N0gCz later today. Here's a taster, with some of Tadhg's pigskin kicking. pic.twitter.com/hQf4vkqNKC

That day, Leader got the kicking bug. He connected with a kicking coach in Connecticut who told him he had the leg for the NFL, but said his technique was 'very raw'. Leader was then put in touch with John Carney, one of the best NFL kickers in the 1990s. Carney is a legend of the kicking game, having played in the NFL for 23 seasons.

The former San Diego Charger now runs an elite kicking camp in southern California for aspiring NFL kickers. So Leader went to kicker camp a few weeks ago, where he received an rapid indoctrination into the placekicker community from Carney and his kicking peers.  He was exposed to all the technical detail behind the position. Inevitably, it was explained to him how difficult it is to get, and hold a job, in the NFL as a kicker.

'I said I'd stack myself against the lads who are getting trials with pro teams. I could tell from kicking around these lads that I was in touch already.  I called my family after the camp and told them I feel I can do it. I had a good talk with the coach. He's one of the gatekeepers of kicking in the States. He said I could do it,' a quietly confident Leader said last week, over a call from Asheville, North Carolina.

The odds are against him: no professional rugby outhalf has become a kicker in the NFL. But Tadhg Leader is on a fascinating trip through American sport that's as much about the journey as the destination. 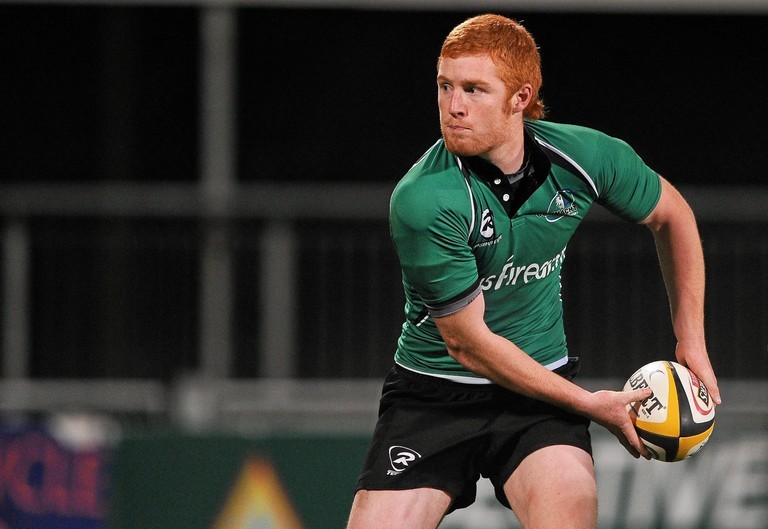 Tadhg Leader (photographed above with the Connacht U20s in 2011 ) comes from a sporting family in Galway. Like his brothers Darragh and Greg, Tadhg came through the Connacht academy. But Tadhg went on out in his own to forge a different career path. He left Connacht to play rugby in Italy in 2014, before moving to the US to study in the Midwest. From there, he ended up in Major League Rugby, playing in St Louis, San Diego and Boston and was capped twice by the USA, against Chile and Canada. His career has been dogged by injury, which has made him open to experiences outside of professional rugby. But his success in the game has been driven by a powerful boot.

'Kicking was always my thing. Whenever I played rugby or gaelic football, I loved kicking.'

When Leader arrived in American rugby, he discovered a cultural phobia against kicking that he believes is linked to American football.

'The level of kicking here isn't great from rugby guys. I think it comes from a mentality of kicking the ball away on fourth down. Kicking is negative. I think that seeped into rugby. Teams would be attacking from their own 22 all the time. When I came out here, I caught people's eye. They'd say 'oh you can actually boot a ball.' I'd tell them it was standard back home.'

But just because he could kick a ball 55 yards didn't mean he had the technical ability to be an NFL placekicker. Over the past few months, Leader has been educating himself in the nuances of placekicking in American football. In doing so, he's been exposed a level of technical detail he's never encountered in his time as a professional athlete.

'There's a lot more to process. I'm measuring out inches. For instance, I had never got out a tape and a rope to measure out my kicking set up in rugby. I just knew four (steps back) and four (steps over). Getting protractors and getting my angles are things I've never done before. In the bare minimum I'm going to be a better rugby kicker because of this.'

There's a perception that placekicking in the NFL is easy because field goals and extra points are relatively straight (an NFL kicker, for instance, would never have to attempt a field goal from the touchline as an outhalf might have). Not quite, as Leader has learned recently.

'You're approaching a ball that's not there. All of this has to happen in 1.2 seconds. Take more than 1.33 seconds, and you're blocked. I was working with free agents and they were so accurate. I just didn't appreciate the skill level. It was impressive. The ball's not even there yet.'

If an Irishman is going to break into the NFL in the next few years, he'll likely be a kicker. Dubliner Neil O'Donoghue - the only Irish-born NFL player - enjoyed a successful career in the NFL in the 1980s, kicking with the Tampa Bay Buccaneers and others.

There are, however,  a few obstacles standing in the way of Tadhg Leader's American dream.

Firstly, it is really, really hard to get gametime reps as an up-and-coming kicker. It's one thing to boot a ball from the halfway line of an empty pitch on a windy day and upload it to Youtube. Building an actual CV if you haven't kicked in high school or college is not simple. Hypothetically, if an American placekicker wanted to make it as an outhalf in the PRO14, he could move to Ireland, join an AIL team and slowly build a reputation. But American football isn't a participation sport. It's too violent and expensive to be played by the masses.

Making things even harder for Leader is that the NFL's covid restrictions mean that teams can only have 5 free agents in their building at any one time. Given the size of NFL rosters and the attritional nature of the sport, kickers are generally the last people to get a trial.

Outside of the 32 NFL franchises, professional opportunities only really lie in the Canadian Football League. Vince McMahon's XFL is set to return in 2022 . There aren't many other options.

Leader is confident his boot speaks for itself. With a bit of luck and some hustle (Leader now has Jesse Foreman of Pro Source Sport representing him), he hopes he could find himself brought onto an NFL team's extended squad for training camp next year (with Covid hopefully no longer an issue), where he and a few kickers would vie for the full time job.

Delighted to have signed with @ProSourceSport, an agency with a impressive track record! Looking forward to working closely with @nflagent1 as I attempt to navigate the American Football world. Excited to see where the journey takes me! #longroadahead #ForTheBrand pic.twitter.com/691497QZWI

And while Leader has never worn the helmet and shoulderpads in an actual game, his experience in professional rugby does stand to him.

'The good thing for me is I've played professional sports and I've played for the US team and my biggest thing was kicking a ball. Kicking a ball in stadiums where people are calling you a ginger fucker and the ginger guy from Harry Potter. A lot of coaches see that as a positive.'

Leader is 28, which is not necessarily a bad thing considering the NFL's best kickers liked Adam Vinatieri and Morten Anderson have kicked well into their 40s.

He may also benefit from the NFL's efforts to be more international. In the last few years, the NFL launched the International Player Pathway, which means teams are allowed an extra roster spot on their practice squad for non-American players. Leader has also taken snaps as a punter and is willing and able for any kicking role on an NFL team.

You have to admire Leader for having the chutzpah to take this challenge on. He's following in the footsteps of so many Irish people before him who arrived on American soil and started dreaming bigger.

'Once I left Ireland and once I left Connacht. I moved to Italy, played out there for a little bit, then I moved to St Louis to study, then I signed for San Diego, then moved out to Boston, and now I'm doing this. I know that cliché, 'land of opportunity', but I have been presented with a lot of opportunities here. And if I didn't do this, I'd be kicking myself, no pun intended. I'd be fuming if an NFL veteran with 23 years experience said 'you could probably do this' but I decided 'nah, it wasn't meant to be'. I wouldn't be able to live with myself.'

Leader still plays for the New England Free Jacks, of course, and has their backing to pursue this. His rugby career will continue and be enhanced should he not receive a trial with an American football team.

It's clear that, in spite of the odds against him, Leader believes he has a chance of making it, if an NFL team would give him an opportunity.

'I was saying at the start there's nothing to lose, but my mentality has shifted a bit now. I'm talking about it here.  Im being a bit more open about it. I think that's an Irishness maybe, where you're hesitant ... not to put your head on pedestal, but be a bit more open about things. Even when I first talked to my family about it, they were a bit like 'What? Why are you going to do that? What happens if it doesn't work out? What if you fail? But from talking to my girlfriend or talking to American friends. they say you'd be mad not to do this.

'Back yourself and enjoy the journey.' 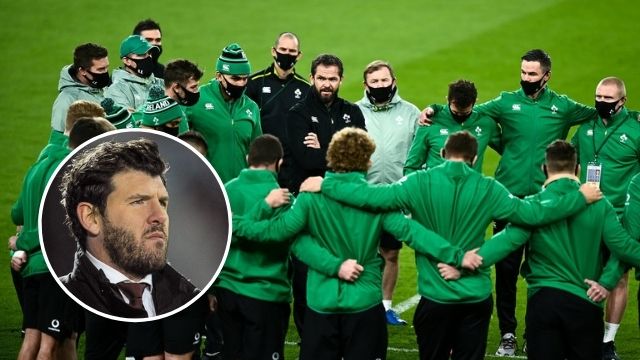 GAA
3 weeks ago
By Maurice Brosnan
Inside The Most Dramatic Declines In Irish Sport
Rugby
1 month ago
By Gary Connaughton
Connacht's Abraham Papali'i Handed Five-Week Ban After Zebre Red Card
Rugby
2 months ago
By PJ Browne
Quiz: Can You Identify These 10 Connacht Overseas Players?
Popular on Balls
Football
18 hours ago
By Emmet Bradshaw
Spanish Media Sharpening Their Knives For Struggling Eden Hazard
2