Tale Of The Tape: Ian Madigan Versus Paddy Jackson

In a weekend of personal clashes across the Champions Cup, one particular battle between out-halves was perhaps the most engaging from an Irish perspective, that was of course Bordeaux’s Ian Madigan versus Ulster’s Paddy Jackson. The exiled Leinster man, collecting a handsome €500,000 paycheck down south, versus the player who appears to be the second in command to Johnny Sexton for the Ireland No 10 jersey heading into the November internationals. We tracked both players head-to-head to ascertain who gained the upper hand.

Jackson was the first of the two called into action and it wasn’t the one he wanted as he fumbled forward a pass from Ruan Pienaar. By contrast, Madigan had the best possible start to his encounter, slotting over a penalty inside the opening five to steady the nerves and give his Top 14 team the early lead.

Nerves were evident from both No. 10s early doors though, in Jackson’s defence, as Madigan, attempting to spin a relatively straightforward pass from right to left to Jean-Baptiste Dubie, sent the pass forward with Bordeaux in a good attacking position.

Early domination for Bordeaux, inevitably led to Madigan having the better of the early exchanges, with some flat passing releasing centre Romain Lonca, and a further loop pass attempting to give winger Blair Connor space to attack down the left flank. Blackrock College man Madigan was attempting to pull every rabbit out of the hat in the opening quarter, with a grubber into the left corner coming to nothing. In fact it looked as though he was blowing too hard early on given that the midfield was literally packed to the brim.

Madigan has made his name on being the cavalier five-eighth and to expect different of him would be a thought process without justification given what we’ve seen of him so far in his career.

The perfect response to Madigan’s dominant start would have been Jackson leading Ulster in front in the counter; and Ulster did do that, however, it was Pienaar who stood in as the halfback to release Andrew Trimble for the Irish province’s opening score; Jackson was caught up in the breakdown from an earlier phase of play but did land the conversion. 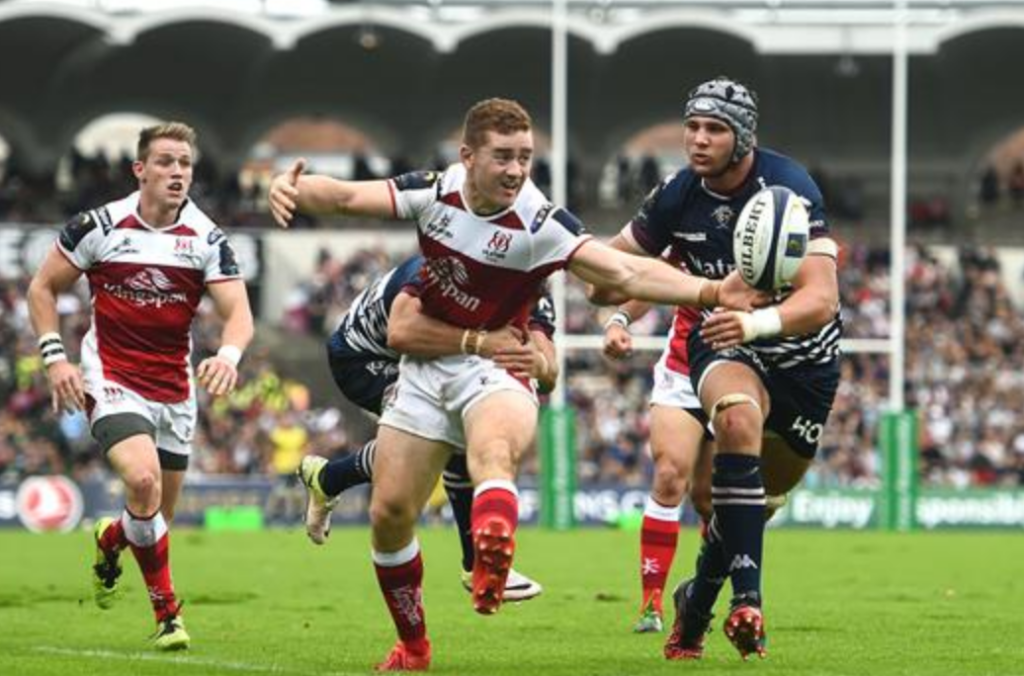 Post-Ulster’s try both sides played a territory-based game with neither of the two Irish 10s exerting dominance on the opposition backline. Jackson was more notable for his punting; however, kicking an Ulster penalty to the corner for his pack to dominate the 22 for a five-minute period. When he did get his hands on the ball he was interspersing inside passes to pack runners, before spinning wide to his back three to attempt to exploit the wide areas of the red zone. Through Jackson’s control of the game, and a very composed and patient pack performance ahead of him, his penalty nudged Ulster further ahead in a half that he started poorly but finished with composure. 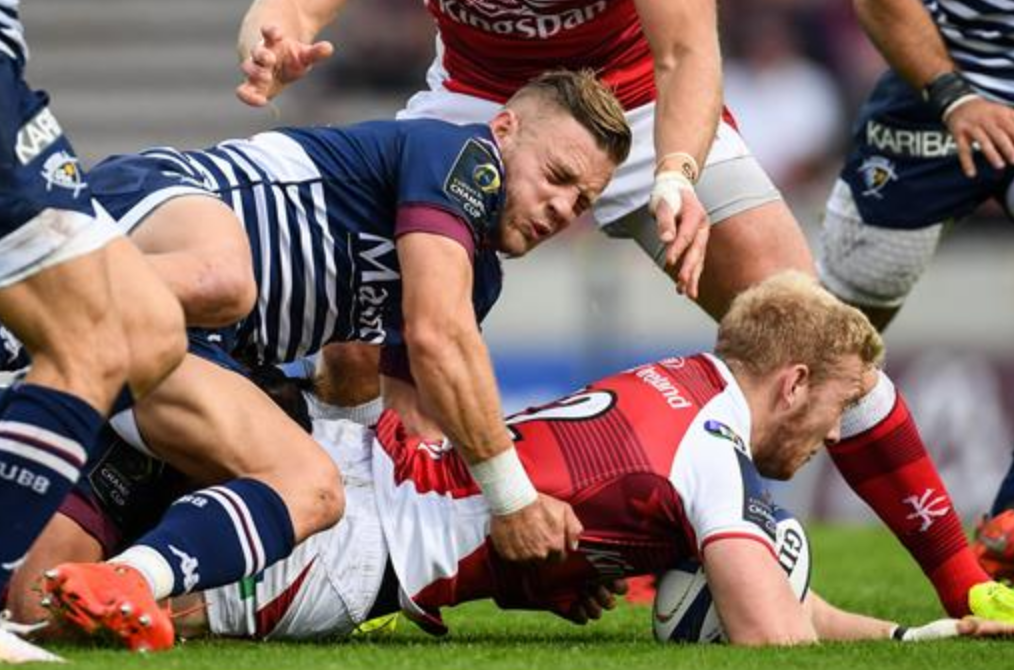 After the interval, Madigan saw plenty of ball kicked down his throat as Ulster looked to move the point of contact downfield. The outhalf opted for direct running lines himself, carrying as the first point of contact into the tackle as his Bordeaux pack set the platform around him. That strategy, combined with other backliners doing the same, coughed up a long range-penalty which Mad Dog smashed over from near halfway.

The head-to-head came to and end on 52 minutes with Madigan called ashore for Lionel Beauxis by Bordeaux assistant coach Emile Ntamack; the replacement promptly kicking over a penalty from close range after an Ulster scrum collapse.

With a fresh opponent in front of him, Jackson was given an immediate opportunity to readdress the balance from Beauxis’ peno and from near halfway landed a massive boot. 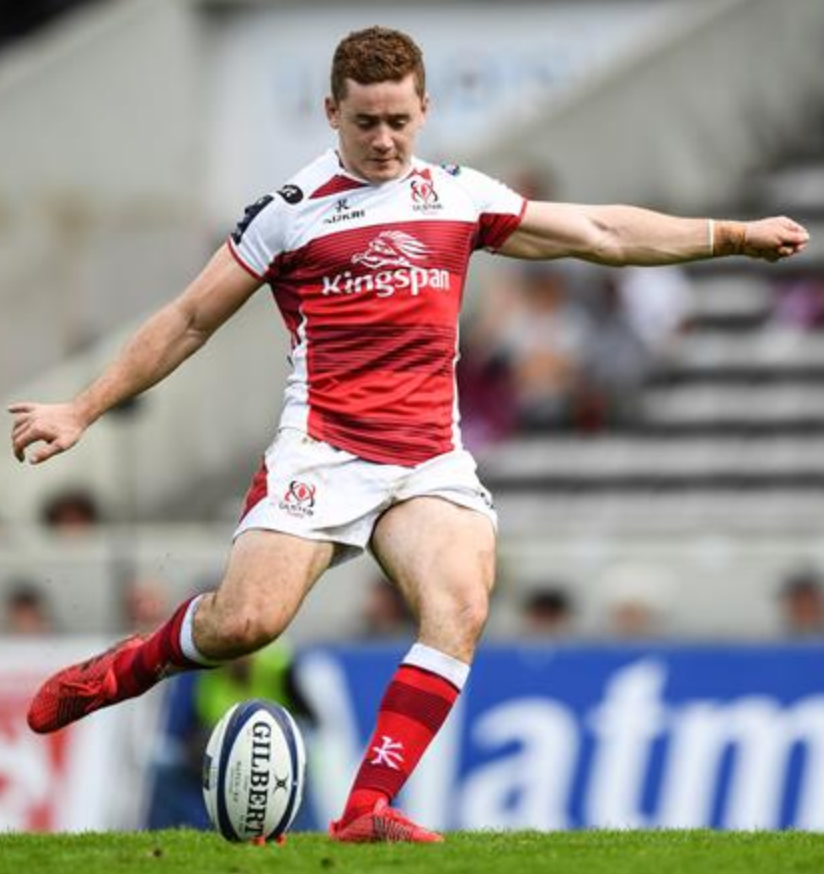 Ulster were hugely under the cosh for the remainder of the game, with just 19% possession as they withstood a siege in their 22; Jackson – unsurprisingly – was tasked in defence for the period and made one monster tackle on second row Jandre Marais as the South African marched towards the line.

Jackson was for the most part a bystander as the game continued to be dominated largely by the forwards and as the French pack finally crossed for their first try.

The French comeback was complete with a penalty try after an early tackle on Baptiste Serin, but not without the attempt of Jackson to stop it. With the Ulster pack deflated and operating on empty, Metuisela Talebula cut the line and was cruising for the left corner to touch down; Jackson was the only Ulster defender on hand to chase back from halfway to the 22 to push the winger into touch.

A further break away try from Connor ended any faint hopes of a losing bonus-point for the Irish province late on, as Jackson - behind an exhausted pack - failed to ignite anything from his backline, or dip into the pocket when needed.

It’s difficult to give a comprehensive verdict on which of the 10s gained the upper hand given Madigan’s withdrawal after under an hour; both players landed two kicks from the tee, while Madigan was on the pitch - so no clear winner there. In terms of ball in hand, there was also little between the two. If a winner had to be picked from that facet one would likely have to go with Madigan, who showed far more ambition in his choices, as well as more of an inclination to take the ball on himself when required in an attempt to ignite his side creatively.

When Madigan was withdrawn, Jackson failed to contain or nullify the threat of Beauxis, as his team was overrun. To place the blame squarely on Jackson’s shoulders would be extremely harsh, but he will take flak for it.

In truth the game as a contest lacked bite for large periods, and was more a game of chess than a high-octane thriller, bar the last ten minutes.

Round two between these two young men in the Champions Cup is slated for 21-22 January. By that stage we’ll be through the autumn internationals and on the cusp of welcoming in the 2017 Six Nations. The word around the campfire is that Madigan won’t get a nod in terms of selection from the IRFU while he serves his self-imposed exile in France, no matter what he does or how he plays. It is up to him to convince them otherwise. On the basis of today he deserves game time.

Statistics (based on Madigan for 52 minutes and Jackson for 80 minutes):