Before 2014, even the most ardent of Munster fans were probably sick of hearing about 1978. Munster 12-0 New Zealand might have been the height of Irish success over the cream of the rugby crop, but we had come too far as a rugby nation to accept this one off win as all there was.

What has happened in the last couple of years ensures memories of Munster's glory remains iconic but it's finally lost its uniqueness as an Irish sporting achievement. That's because Ireland beating New Zealand in rugby has suddenly become almost common place.

While Chicago certainly broke a barrier of its own that was well and truly shattered in Dublin last month, the true pioneers of this frontier were the Ireland women's team who became the first Irish senior team to beat New Zealand with their 17-14 win at the 2014 World Cup.

While Joe Schmidt's team stopped a world record run of wins for the All Blacks in Chicago, that record had nothing on what the New Zealand women's team had achieved leading up to the 2014 World Cup. The Black Ferns had won the previous four World Cups, and hadn't lost a game in the competition going back to 1991. 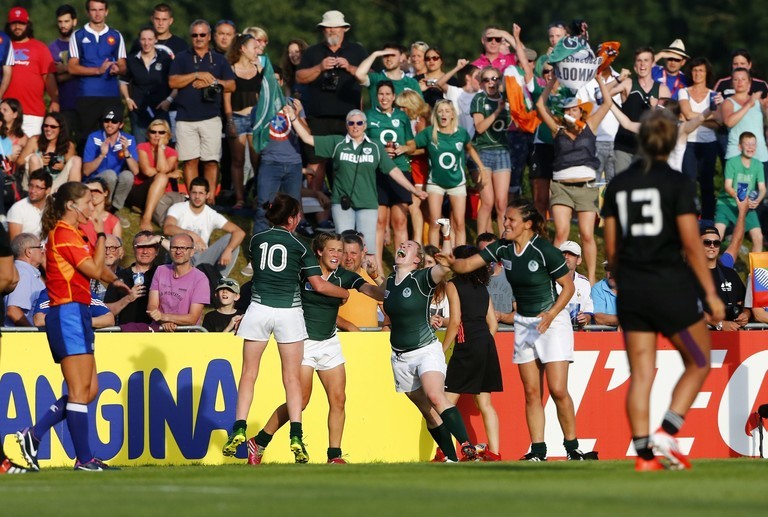 Recently, together with Honda, we brought together three greats of women's sport in Ireland - 100 cap Republic of Ireland international Aine O'Gorman, Dublin's two-goal All-Ireland final hero Carla Rowe, and Jenny Murphy, the Irish rugby centre who played that day in France - to discuss the changing face of women's sport.

In three glittering careers, there were a number of memorable moments for O'Gorman, Rowe, and Murphy to look back on in their respective sports, but for Murphy, it's an easy one as to what the biggest day of her career was.

New Zealand. Beating New Zealand in the World Cup. That was huge.

For Irish rugby, Murphy agrees there is still a long way to go for the women's team to get a truly fair shake, but things are changing, and a huge amount of it came down to the 2013 Grandslam, the 2015 Six Nations Championship, and of course, that day in France. It was the team's belief in themselves before the game that really made things so special, explains Murphy.

We were in our own little bubble. People had written us off. These are the best in the world. They hadn't been beaten in 16 years.

It was a game that made household names of Murphy, Nora Stapleton, Fiona Coghlan, Niamh Briggs and Sophie Spence, among many more.

Centre buddies after last year's win against New Zealand. What a day. #tbt

Murphy remembers the squad being in such a good place before and during that game that distractions like being written off by an uninterested media or facing up to the haka before the game didn't seem to phase them at all. Ireland had already made waves by winning a Grand Slam in 2013 and had already had a good result in the competition by beating the USA. The outside world mightn't have thought they had a chance, but Murphy says the team thought differently.

Journalists, some of them hadn't bothered to come over to France where the World Cup was being played, and it was just like 'Oh the girls, they've done well, they beat the USA', who were ranked above us at the time, and that was a really physical game, 'but now they're meeting the Black Ferns and...'

We didn't really pay much attention to it. The squad was in a really good place.

It was weird, we were in the changing rooms, and I can remember the blue floor leading up into the hall, and you could hear the girls chanting, and they have their Maori haka before the game.

Try scoring hero on that famous day Alison Miller had her own unique way of tuning out the haka.

I was chatting to Ali Miller actually recently and I remember she wasn't paying attention to them at all. I think she was humming a different song in her head. I think maybe it was Christina Aguilera or something like that. 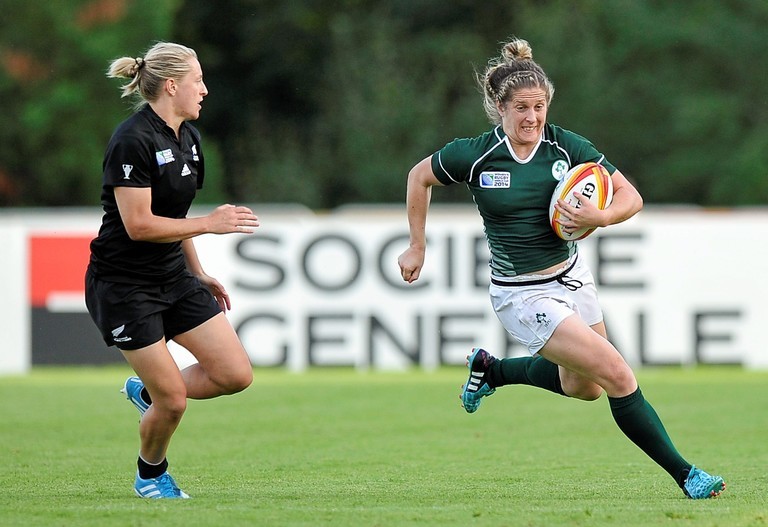 Murphy was equally unfazed by the New Zealand ritual but didn't quite go down the Christina Aguilera route.

You just kind of enjoy it. It's a really cool thing to witness but you're not really paying that much attention to it. As well as that, sometimes when the other teams national anthem is on, I can only speak for myself, I'm in my head tipping away that these are the three things that I'm going to do well in the game myself.

While the rugby media mightn't have given Ireland much of a chance, what meant a lot to the players was that the Irish supporters definitely did and showed up in their droves for the game, which was played in the suburbs of Paris.

There were parts of that game in particular where it was like a home game for us. It was absolutely ridiculous. So loud! So many Irish people had flown over. Some had flown over from New Zealand, from the States, loads obviously from Ireland, and it was a difficult place to get to as well and they traveled.

As the Fields of Athenry were going 90, the Kiwi girls had a lineout and you're given a set call, and it was so loud that hooker couldn't hear and was like, 'no, no, you have to go again' and that was unreal.

When the final whistle went, the whole place went mad. It was really cool to be a part of, and obviously to be the first Irish senior team to beat the All Blacks or the Black Ferns, it was really something special.

It was a day that put Irish women's rugby on the map. Since then there have been plenty of setbacks including a big semi final defeat that year to a formidable England team, and a bitterly disappointing World Cup performance here in Ireland last year. But the effect of being the first, of causing the shock of the century, will always stay with the Irish sporting public, and the effect of having a team and achievement to look up to for young girls taking up the game is something that we'll only see the true effect of in years to come.

To beat them in that competition was huge and I think people started paying more attention to us and what we could do.

Rugby
4 months ago
By Brian Strahan
World Cup Classics: France Vs New Zealand 1999
Football
6 months ago
By Balls Team
Ranking Every Taoiseach In Order Of Their Ability To Piggyback On Irish Sporting Success
Rugby
9 months ago
By PJ Browne
The Iconic Game Which Changed Munster Rugby Forever
Popular on Balls
Football
2 hours ago
By Gary Connaughton
Gerrard Blasts Officials After Strange Excuse For Not Awarding Penalty
1