As sad as Irish and Munster rugby fans are about Paul O'Connell's departure from these shores after the World Cup, it looks like it's fair to say the French are very excited to see him in their Top 14.

O'Connell is among a raft of new imports into the Top 14 and French rugby newspaper Midi Olympique have brought out a best XV of the newest players to the league. O'Connell is one of the names in the all-star team that emphasises how hard the challenge will be for the provinces in Europe next year: 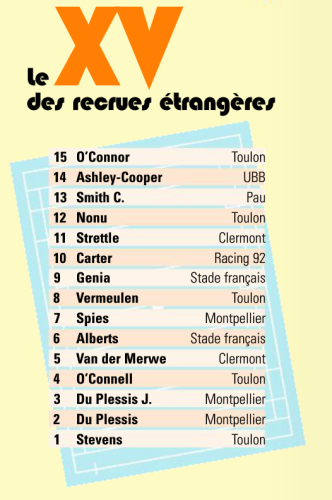 It's an exceptional team in most places, one worthy of being a World XV. The likes of Bismarck du Plessis, O'Connell, Duane Vermuelen and Dan Carter are all among the best in their position in the world.

For as good as the team is, it is a bit strange that Matt Stevens is the chosen loosehead.

See Also: A Suitably Large Message To Paul O'Connell Has Been Unveiled In Limerick

Rugby
8 months ago
By Gary Connaughton
Watch: Toulouse Score One Of The Most Outrageous Tries We Have Ever Seen
Previous Next