The URC has been nothing short of a success so far. The rebranded league has had record viewing figures, the best players have played and the quality on show has been top drawer. It's been the boost that the old Pro 14 needed and has exceeded most expectations.  After a month-long hiatus, it returns this weekend.

The season may only be 5 games old, but it has already been an exciting one for the Irish. All the sides are playing expansive, attacking rugby. The four provinces make up the top 4 for points scored and Leinster, Ulster and Munster make up the top three in the URC going into the international break.

The URC schedule has allowed for team to play their best players and they have so. International calibre players are playing week-in-week-out for their clubs and the we've gotten to see some magnificent rugby be played. But who's has been the best so far? It may be premature to name a team of the season but it's always good to give praise when needed, so here's the URC team of the season so far.

URC Team of the Season so far

At loosehead we have Leinster's Andrew Porter. The prop has made the big switch from tighthead prop to loosehead this season in hope of getting a regular starting spot for Ireland and Leinster. He used to play loose when he was in school so he took to it quite easily this summer. Leinster have had a really strong scrum this season and it was hugely evident against Scarlets last month.

Just before half-time Leinster earned a penalty try from constantly winning scrum pens and putting Scarlets under huge pressure. Scarlets and Wales tighthead Willgriff John was under so much pressure from Porter that he was taken off at half-time to try and ease Porter's dominance. Porter brings the same intensity to every match. He has great strength, speed and power making him the perfect modern day prop.

Munster have the 2nd best lineout in the URC so far this season and Scannell has contributed immensely to that. Munster have a 95% lineout success rate, winning 65 lineouts from the five games played. Over that time they have only lost three lineouts as well.

Scannell has also beaten three defenders and made one clean linebreak so far this season. He has one try too to cap a great start to the season for the hooker. He's been a stalwart for the Red Army for many years and some think he's been overlooked for the Ireland squad.

Ulster have had one their best starts ever to a season. They have won four of their five matches while getting bonus points in each of their wins. One aspect of the game that has helped them to this record is their scrum. Ulster have the 3rd best scrum n the URC so far this season. The have won seven scrum penalties and won 95% of their scrums.

O'Toole and the rest of the Ulster pack has played a huge role in that. The 23-year-old is a big lad and hard to shift in the scrum but also gets around the field quite well, having 35 carries, putting him in the top 35 for carries in the URC. O'Toole has also been impressive in defence, making 42 tackles.

The Leinster second row has really come along this season. Molony has upped his game this year and has established a starting spot in the squad this season. He has played the full 80 in three out of the five games played. He played a combined 82 in the other two games so you can say he has been durable as well.

Defence has been where Molony has really impressed. He's in the top 10 in the URC for tackles made with 53 tackles and has won two turnovers. He is still uncapped but that could change soon.

In attack O'Donoghue has been very formidable. he has beaten six defenders this season, gotten two tries, two try assists and a clean linebreak. He has simply been unstoppable in attack. O'Donoghue has been pivotal to Munster's impressive start to the season. He has always been a safe pair of hands for Munster and rarely lets the side down.

Capable of playing anywhere in the back row, O'Donoghue in any other time would be a regular starter at 6 for Ireland, but with the embarrassment of riches in the back row Ireland have O'Donoghue has only gotten 2 caps. Time will tell if the Waterford man can break in.

The Leinster openside has been one of the players of the season so far. He has been great in defence this season, racking up 30 tackles and having the 6th most turnovers in the URC with six. He brings great energy across the whole pitch and has an engine many players envy of. The flanker has really been exceptional so far this season.

Van der Flier has also brought his attack game along in huge away. For his slim build van der Flier is a very strong ball carrier. He is rarely smashed backwards and makes yards consistently. He has gained nearly 100 metres so far this season off only 19 carries. An 8/10 performance every week has been the bare minimum for him this season. He was also on Ireland's star performers this past month.

Ulster's problem last season was tries. They didn't score enough of them. They could win games but missed out on the bonus point tries all too often. Timoney has helped change that this season. Ulster have four bonus points so far this season and Timoney is the URC top try scorer this season with five.

Timoney has been impressive all over the pitch in every part of the game. In defence he has made 58 tackles and made five turnovers this season. He rightfully earned his call-up to the Ireland squad and he was very good in his appearance against the Pumas, on short notice.

Watch them all right here 👇 pic.twitter.com/tY1XpfQLUF

The 19-year old has taken to professional rugby like a duck to water. He has arguably been the player of the season for Ulster during their excellent start to the season. He is in the John Cooney mould with his dynamic running, try scoring and goal kicking but the potential is there to outshine the Irish international Cooney in a few years.

Doak has scored three tries so far this season while adding 11 conversions to that tally. He could he was hard done by with not getting picked in the Ireland squad but if he keeps this form up he'll get a cap or few soon enough. He had his first big challenge against Connacht in Round 5. It wasn't his best day but if he can bounce back from that defeat, it should be a very promising season for the teenager.

Nathan Doak is ready for the big timepic.twitter.com/dh9P9QwKWd

The Connacht man has been simply sensational this season. He has added a huge sense of leadership to his role to add to the flair and skill he has. His kicking has been top notch as well. Carty is the leading points scorer in the URC so far with 56 points. He has the most scored penalties as well with 11 successful kicks and 9 conversions to top it off.

Carty himself has said he had to work on his defence and he has done. He by far isn't the best defender, he's missed 12 tackles this season, but he is way more solid than he was. If he can perfect that side of his game he could be the perfect all round player.

Jack Carty more than atones for his earlier missed conversion, as Joey Carbery is punished for his casual play.

The Aussie winger has taken the URC by storm this season. The former Wallaby u20 international has by far the best attacking stats in the league. He's scored four tries, has beaten 25 defenders and has gained a jaw-dropping 321 metres. He has been amazing going forward. He thrives in the broken field, where there's more space to find.

His two tries against Ulster shows his wit and confidence in himself to make the right decision. He's surprisingly earned a call-up to the Ireland squad ahead of the autumn series against Japan, New Zealand and Argentina. He qualifies through his Cork-born mother. Hansen is a born try scorer and hopefully he can get a chance with Ireland and show the world what Connacht fans already know.

Frawley was called into his first Ireland squad this November and you can see why if you've watched him over the last 18 months. Since switching from out-half to centre Frawley has come a really long way in his game. He bulked up and made himself a dangerous runner while not losing the distribution and kicking skills he built his reputation on.

He is 100% from the tee and has been one of Leinster's best players so far this season. At stages Leinster have struggled with their handling but Frawley has never let the side down.

Ringrose has put his Lions snub in the past and has started this URC season on fire. Leinster have the number one attack in the league and their backs have been world-class. Ringrose for his part has three clean linebreaks as well as 138 metres gained. He's also kept up his solid defence by making 26 tackles.

He came into this season to prove people wrong and he's certainly done that. Ringrose isn't the most flashy of players but he is a very good runner who links up play very well. He doesn't always have highlight plays but he does everything to a very high standard.

The Leinster winger has brilliant going forward. He may only have one try, but the winger has made 158 metres while beating four defenders. He has four offloads on top of his 12 defenders beaten to round off a strong attacking stats sheet. He's had to juggle his playing time with Adam Byrne and James Lowe, but he's still made a huge impact when he played.

His trademark footwork makes him almost impossible to stop. Some would say he can step his way out of a phone box and who can blame them. He's been defensively sound too with 3 turnovers won. He's one of the best wingers around right now and has shown it in the URC so far this season.

To round off a Leinster-centric backline Hugo Keenan slots in at fullback. No matter the quality of the opposition Keenan feels like a must have for Leinster. When he isn't playing you can tell they really miss him. He's the glue the holds this Leinster team together.

Keenan isn't extravagant but he makes everything he does look simple. He' was brilliant in the November internationals and should be a lock-in for the team of the season.

See Also: "I Made The Right Decision": Caelan Doris On Taking Time Off To Deal With Head Injury Symptoms 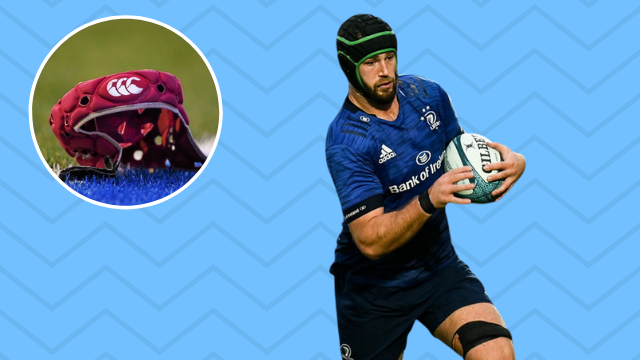 Rugby
2 days ago
By Jonathan Browne
"You Pick Up Bits And Pieces From Everyone": How Andrew Conway Has Moulded His Game
Rugby
4 days ago
By Jonathan Browne
No James Lowe As Ireland Squad Announced For Six Nations
Rugby
1 month ago
By Jonathan Browne
Ronan Kelleher Praises Paul O'Connell Impact On The Irish Lineout
Popular on Balls
Basketball
21 hours ago
By Eoin Harrington
Kieran Donaghy And Tralee Warriors Claim National Basketball Cup Title In Tallaght
Football
1 day ago
By Gary Connaughton
Carragher Reveals Unhappy Instagram Message From Lionel Messi After MNF Comments
The Rewind
1 day ago
By Gary Connaughton
Quiz: From Which Irish County Did This Company/Product Originate?
GAA
5 hours ago
By PJ Browne
Tiernan McCann Decision Part Of Worrying Trend For Tyrone