Retired Irish Times rugby writer Edmund Van Esbeck has compiled all the results from the interprovincial championship from 1946 to 1999. He seems to be the only one who cared enough to bother.

In terms of profile, the interpros were barely above the level of the Railway Cup. The games, played in December and January, merited a 90-second highlights package on Sports Stadium. It didn't help matters that from the mid-80s through to the mid-90s, the competition was completely dominated by Ulster.

The allegation has long been that the southern media has never found northern success stories as charming as Leinster and Munster victories.

The Northern lads were more geed up for the interpros than were the Leinster and Munster guys. Connacht's hunger levels weren't deemed relevant.

According to Brendan Fanning in From There to Here, the Ulster branch held a deeply ambivalent attitude towards the All-Ireland League, in particular resenting the inclusion of the phrase 'All-Ireland' in the title.

At the turn of the 90s, Jimmy Davidson, the Ireland coach and the man who had begun Ulster's reign of dominance, argued that the club game was given too much prominence and that Ireland should seek to emphasise the provincial game as the launchpad to the national side. He got nowhere in this quest blaming Ireland's subsequent underachievement in the 90s on the IRFU's dim-witted obstinacy.

Van Esbeck's records demonstrate the extent of Connacht's inferiority. For decade after decade, they simply lost and lost and lost.

They amassed ten wins over Ulster (the bulk of them in the 50s and 60s), eight wins over Leinster (half of which arrived in the 1990s) and only four wins over Munster across 54 years.

They went the whole of the 1970s without winning a game. They did manage one 6-6 draw with Munster in 1974-75. In the 80s, for no reason other than to make the province more competitive, the IRFU decreed that London-based players would represent Connacht.

This held until 1992-93 when the 'Exiles' participated in the competition themselves as a fifth outfit. In their four seasons competing, the Exiles enjoyed a 100% record against Connacht.

Noel Mannion - whose distinction as the only Connacht rugby player to feature in an Olympic opening ceremony may well stand forever - played for Connacht for years up until the arrival of professionalism in 1995.

At that time the club game was stronger. The AIL was really flying. You could have Shannon playing Garryowen with 7 or 8,000 people in Thomond. And Connacht could have playing Munster the following week and there might be 1,000. The interpros were playing second fiddle really. It was just four games around Christmas.

In my provincial career, I mean I started in '85, you'd play the three provinces, and you might play a friendly. So, you'd be playing roughly four games a year or five games a year at most. And if you beat one of them... we never beat Ulster, we beat Leinster and beat Munster, but we never beat Ulster in my time. They were very strong at the time.

I talk to some of the current professional guys in Connacht now. We'd be playing Leinster on a Saturday. We'd meet on Friday night like. We'd have to meet in Athlone or the club in North Kildare because you had to cater for lads coming from Dublin. We might meet on Friday and have a session and then play on the Saturday. As things progressed under George (Hook), you might meet when there wasn't a game. You might meet once or twice before that. But it was very, very limited time, because lads were working. And as for getting guys backs from England, it was a no-no, you just couldn't.

But then I don't we were that different to anybody else. Leinster and Munster may have done a bit more but not much. Ulster were different because they were very much a club side so they would have done a lot of training together themselves. But we were way down the pile, I mean we were just... at times, it was very frustrating, it was terrible. But then other times it was great fun. And the odd time, you got a win it was great.

Despite a brief but dramatic upswing in performance levels in the late 90s under Warren Gatland - which succeeded in attracting the notice of the people up in Dublin who swiftly hired Gatland once Brian Ashton upped and left - the relationship between rugby in the province and the provincial rugby team remained distant.

Gerry Casey, a stalwart of Castlebar Rugby Club, says there was little 'empathy' between junior rugby clubs in the province and the professional Connacht setup. The two worlds were entirely cut off from one another.

There wouldn't have been much empathy between the junior clubs and the Connacht setup. Recently, under Eric Elwood, we would have players coming down to junior clubs to talk to teams down here and help out with skills. That would never have happened before. A lot of the lads were playing with London Irish and coming down from Dublin to play a match.

In Casey's telling, far from killing off Connacht rugby, the threat of disbandment was the making of rugby in the province. Because, in the hopes of staving off extinction, Connacht began to tap into this constituency. The junior clubs for their part, long indifferent to Connacht, rallied to the cause in the face of threats from Dublin.

"When the IRFU tried to disband Connacht, the province needed to get the support of the junior clubs," says Casey.

The protestors convened at the Radisson Hotel, the organisers addressing the assembled from behind a table bearing the message 'CONNACHT FANS SAY I.R.F. OFF'.

This was simply another instance of the Connacht underdog getting screwed. The mood was encapsulated by 1980 All-Ireland winning hurling captain Joe Connolly who gave a highly emotive speech which roamed across almost every area of western grievance, citing emigration figures and the journalism of John Healy along the way.

"There was a meeting down in the Radisson (in Galway) where we resolved that this wasn't going to happen," remembers Casey. "There was a massive crowd and a protest march was fixed for the following week." 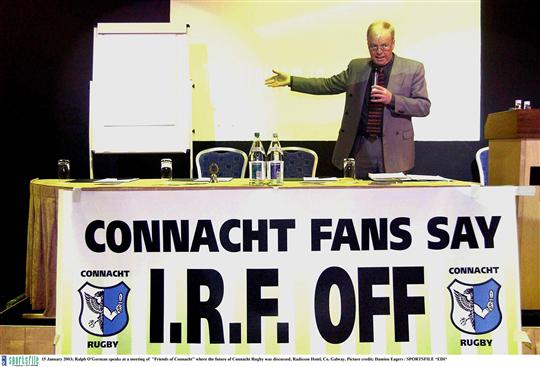 Prior to the mobilisation, the IRFU were feeling serene about their decision to pull the plug. In their eyes, it made economic sense for Ireland to continue with three teams and that was that. They did not anticipate thousands of westerners descending on Lansdowne Road.

As Charlie Haughey had told the nation in 1980, so Philip Browne told the rugby community in the early noughties. The IRFU must operate within its means. The union were staring at a deficit of €4 million by the season's end, 2002-03. Browne said that the biggest savings were to be made on the playing roster. The IRFU couldn't afford to pay the players of all four provinces.

The technocracy had spoken and Connacht was for the chop. He delivered a lugubrious, rather high-ranking civil-service-y statement outlining the IRFU's position.

Professional sport is struggling in a number of areas against a stagnant commercial backdrop. It's an issue that we're going to have to address - we simply can't live beyond our means.

Friends of Connacht Rugby and their media supporters - notably Gerry Thornley of the Irish Times - had no bias against money-saving. Financial incontinence was not a core value of their campaign. Indeed, they wholeheartedly agreed with Browne's sentiments, suggesting, for example, that the expensive practice of black tie, post-match dinners for both teams after international games was an 'anachronism' in this day and age. 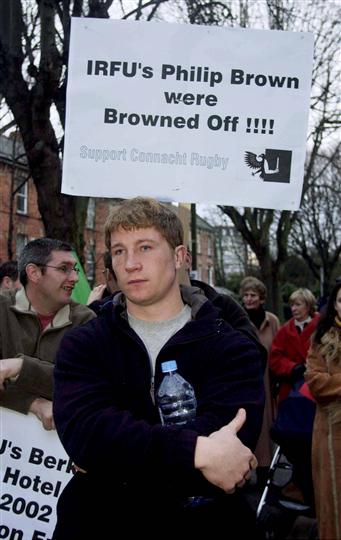 On 23 January, 1,200 Connacht supporters - according to Garda estimate - landed in Dublin, gathered outside Searson's Pub in Baggot Street and walked to the IRFU offices at 62 Lansdowne Road.

Their number included a placard bearing Jerry Flannery and Mr. Connacht Rugby Eric Elwood. Former Connacht internationals Robbie McGrath and Noel Mannion were there. Outsiders showed up in solidarity. Former Leinster coach Jim Glennon - at that stage an FF TD for Dublin North - joined the marchers, as did the most famous Munster prop of the 70s and 80s Ginger McLoughlin. Ex-Leinster and Ireland outhalf Mick Quinn, a figure on the 1974 Five Nations winning team, was also spotted.

More political ballast was provided by Mary O'Rourke - who demanded 'justice for our province' - and the recently elected leader of Fine Gael Enda Kenny.

When the protesters reached the gate of 62 Lansdowne Road, Philip Browne, in an adroit PR move - although that may be too cynical an interpretation - appeared at the door to meet them. 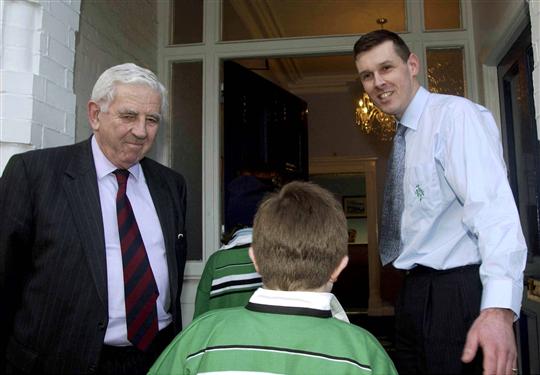 Danno Heaslip and Tommy Conlon, representing Galwegians and Buccaneers respectively, stepped forward with three mini-rugby players from Galwegians, and delivered their petition to a smiling Browne and treasurer John Lyons. They were invited in for tea but declined the offer.

Browne delivered an emollient statement which offered immediate hope to the campaigners.

The first thing it shows is the passion in Irish sport, which is such a fundamental part of our achievements on the pitch. Secondly, it shows that there is genuine concern out there, and we've got to take that on board.

What's striking now about the Friends of Connacht Rugby agitation is how successful it was. Aloof technocrats usually hold out longer in the face of people power.

Six days later, the IRFU backed away from the proposal to disband Connacht. For the time being at least they were off the ledge.

Connacht continued to languish near the foot of the Celtic League table for the remainder of the decade, finishing dead last three years in a row between 2008 and 2010.

According to Casey, the continued on-field struggles notwithstanding, the FOCR campaign fostered a link between the clubs and the province which has been a source of strength in the past decade. Crowds have swelled, principally off the back of improvement on the pitch, but also due to increased engagement with the local rugby scene on the part of Connacht itself.

In the years since, there's been a much stronger connectivity between the clubs and the province. For instance, these days, Pat Lam brings the team to Westport for training sessions.

(The threat of disbandment) was the catalyst. Since then there has been a much stronger empathy between the province and club players and fans.

Rugby
2 weeks ago
By Emmet Bradshaw
Watch: Connacht Use Late Captain's Challenge To Win Cracker At Ulster
Rugby
3 months ago
By PJ Browne
Andy Friend Signs New Deal To Stay On As Connacht Head Coach
GAA
4 months ago
By Maurice Brosnan
Inside The Most Dramatic Declines In Irish Sport
Previous Next