The URC: Three Standout Performances From Round 4

The Irish teams continue to dominate the URC as they Ulster, Leinster and Munster remain the only unbeaten sides in the competition. Connacht were unfortunate yet again to lose to Munster but the first interpro of the season lived up to the hype. The match was tense throughout and both sides fought to the last second. There was dominant displays from each team this weekend but here are just a few of the standouts.

Munster took the honours in the first interpro of the season as a late Diarmuid Barron try was enough to beat a valiant Connacht at Thomond. Before the match tributes were payed to the late Anthony Foley, five years on from his sudden death in 2016. Connacht raced to an early 6-0 lead after Jack Carty converted two penalties. However a Sam Arnold yellow card opened the match up for Chris Cloete to score a try in the corner just before the half. The try has caused quite a lot of controversy due to Tadhg Beirne potentially being offside from Scannell's kick. It was awarded nonetheless and Munster had the lead going into the break.

Joey Carbery slotted a couple of penalties and Paul Boyle scored a try for Connacht to make the scores 13-11 for Munster. But with just over 10 minutes to go Carbery's kick was charged down by Carty just outside the Munster 22. The Connacht captain gathered the ball and scored under the post as it looked like Connacht could get a memorable 18-13 victory. However with just a couple of minutes left Munster worked their way onto the Connacht try line and Diarmuid Barron crashed over and Carbery scored the conversion to win. They now remain unbeaten in the URC while Connacht are sit 11th despite their stellar performances this season.

Carty was simply brilliant on Saturday night. He picked up Man of the Match even though Connacht lost. He slotted over his penalties and scored the go ahead try for Connacht. Carty also made 12 tackles and won a turnover. The only fault he made was missing the conversion for Paul Boyle's try. If he made that Connacht would've gotten a draw, but they wouldn't have been in a position to win if it wasn't for his performance. With huge competition behind Johnny Sexton in the Ireland set up, Carty could be a fantastic option for Andy Farrell. Carty brings a lot of flair Ireland lack and can produce moments of brilliance. If Ireland can cover up for his downfalls then Carty could be a very viable back-up at fly-half.

A special mention has to go out to Tadhg Beirne who was immense on Saturday. On his return to Thomond Beirne racked up three turnovers and two lineout steals while also getting a try assist for Cloete. Even if he might have been offside he did brilliantly to control the ball and keep it alive for Cloete to touch down in the corner. Beirne's return couldn't have come at a better time with RG Snyman's injury and he will play a huge role in Munster's title challenge this season.

Ulster march to the top of the URC as they picked up yet another bonus point win, this time over the Lions at Ravenhill. The scoring began early as a savvy lineout move led to a try scored by Nick Timoney after only three minutes. The Lions did reply with a try of their own 13 minutes later but that was as good as it got. James Hume scored before the break to give Ulster the lead. Lions kept on making mistake after mistake and Ulster pounced on it in the second half. Matty Rea crashed over to give Ulster the perfect start to the second half. Nick Timoney was there again with 13 minutes to go to score his fifth try this season. That makes it four wins from four and four bonus points as the Ulstermen sit alone at the top of the URC.

The back rower has been phenomenal so far this season for Ulster and Friday night was more of the same. Timoney is a very dominant ball carrier and is hard to stop. Timoney is so consistent with his carries close to the try line and is a very good finisher, five tries in four games shows that. He is also very strong defensively, missing no tackles and winning 2 turnovers against the Lions. Timoney is very versatile and is able to play anywhere in the back row, which could definitely be to his and Ireland's benefit this November.

Leinster won yet again at the RDS on Saturday as a late flurry of tries won them the match. After a poor display at home to Munster, the Scarlets came out of the blocks flying and got an early try through Johnny McNicholl. James Lowe won't want to see that try again as his defensive flaws were shown again for that try. Leinster fought back though and scored 3 tries in 20 minutes to end the half. Tries from Kelleher, Porter and a penalty try from a scrum gave Leinster a good lead going into half time. Doris scored to start the second half but the Scarlets came fighting back and got another try. Leinster then brought on the cavalry and the bench dominated. A try from Cian Healy and two from Dan Sheehan won the match for Leinster as they move up to second in the URC table.

The young back has been a very good for Leinster so far this season. Since moving down the line from fly-half to centre, Frawley has shone. He brings a different dynamic to Leinster's attack as he can slot in at 10 instead of Sexton and be a second distributor. As seen for England and many other international sides recently, playing with two 10's is very effective and hard to defend against. Frawley is also a great ball carrier and defender. He made 5 tackles on Saturday and missed none. When Johnny Sexton had to go off injured Frawley and Ross Byrne stepped up and both controlled the match. If he can stay fit, Frawley should be in line for a call-up soon enough. His versatility could be a vital tool for Farrell as Frawley can slot in at 10, in the centres and at full back if needs be.

URC standings after Round 4

Here’s the table after Round 4 📊

Which team surprised you most? 🤔#URC pic.twitter.com/mk94w037TE 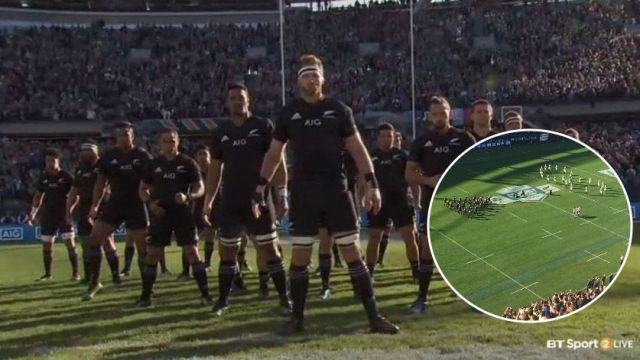 Rugby
1 day ago
By Jonathan Browne
"You Pick Up Bits And Pieces From Everyone": How Andrew Conway Has Moulded His Game
31

Rugby
1 day ago
By Jonathan Browne
"You Pick Up Bits And Pieces From Everyone": How Andrew Conway Has Moulded His Game
Rugby
4 days ago
By Jonathan Browne
Permutations For Irish Provinces Heading Into Decisive Champions Cup Weekend
Rugby
1 month ago
By Jonathan Browne
Donal Lenihan Names 'Dream' Pick For Next Munster Head Coach
Popular on Balls
Rugby
16 hours ago
By Colman Stanley
Jimmy O'Brien Announced His Arrival On The Biggest Stage This Afternoon
Basketball
13 hours ago
By Eoin Harrington
Kieran Donaghy And Tralee Warriors Claim National Basketball Cup Title In Tallaght
The Rewind
21 hours ago
By Gary Connaughton
Quiz: From Which Irish County Did This Company/Product Originate?
Football
23 hours ago
By Gary Connaughton
Carragher Reveals Unhappy Instagram Message From Lionel Messi After MNF Comments